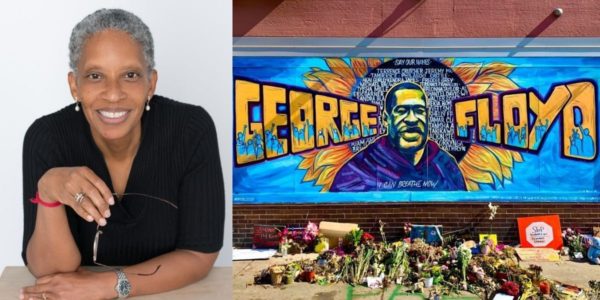 Pamela Ayo Yetunde, a Community Dharma Leader, Zen practitioner, chaplain, and author, was living in St. Paul when George Floyd was tortured and murdered. She experienced the unrest in the Twin Cities and elsewhere in the weeks and months after this event and paid close attention to the George Floyd/Derrick Chauvin trial in March. She was concerned that if Chauvin was found not guilty it would have serious repercussions for the safety of communities of color. She could not have just sat on her cushion without finding a way to respond.

Ayo, along with BIPOC Zen and Insight practitioners in the Twin Cities, founded Buddhist Justice Reporter: The George Floyd Trials to address the role Buddhists could play in criminal justice reform. This project is the focus of an online SFZC program Ayo is offering on Thursday, June 10, from 4 to 6 pm PT. She will engage participants in a discussion with an aspiration to tap into the compassionate and creative energies that already exist in Buddhist communities. END_OF_DOCUMENT_TOKEN_TO_BE_REPLACED 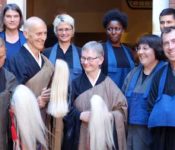 Last Saturday, September 17, we celebrated 16 new bodhisattvas taking the precepts and entering Buddha’s way â€“ nine students at City Center, and seven at Green Gulch Farm.Â  It was a joy to witness such optimistic and enthusiastic practitioners filling the halls and courtyards of our temples. END_OF_DOCUMENT_TOKEN_TO_BE_REPLACED 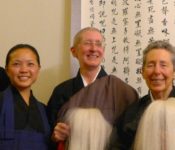 The evening of Friday, September 2, 2016, a group of friends, family and fellow-practitioners gathered in the Buddha Hall at City Center to witness three sincere and beautiful Zen students formally take the Bodhisattva vows and don Buddha’s Robe for the first time. END_OF_DOCUMENT_TOKEN_TO_BE_REPLACED 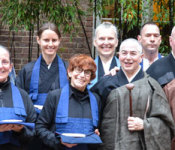 On Saturday, January 9, auspiciously early in the year, seven bodhisattvas received the precepts and donned “Buddha’s Robe”, six of them for the first time and one for the second time.

END_OF_DOCUMENT_TOKEN_TO_BE_REPLACED 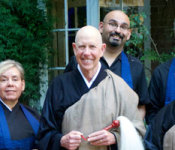 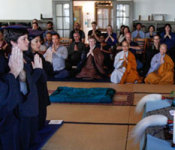 Last Saturday, Keiryu Liên Shutt gave the Buddhist precepts to five of her students in a lay ordination ceremony at City Center. In addition to the significance of the day in the individual life of each student, it was celebratory to have a teacher of color ordain her first group of students here (which last occurred in the mid-seventies). END_OF_DOCUMENT_TOKEN_TO_BE_REPLACED 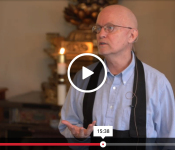 Service is practice, and practice is service.

A Bodhisattva is one who has taken the vow to become awakened for the sake of all beings–to live and be lived for the benefit of others. In this video excerpt Kai Ji Jeffrey Schneider shares reflections and stories on the Bodhisattva vow and how we express it in our daily lives.