In Appreciation of Thomas Cleary: A Personal Remembrance I am writing to honor Thomas Cleary after his passing away June 20 and his amazing legacy of translations, Buddhist and otherwise. Many of his texts are crucial to Soto Zen practice, and for all modern Buddhist practitioners. His translations are lucid, creative, and accessible. They included not only Chinese, Japanese, and Sanskrit Buddhist texts, but important Taoist and other Chinese classics. He later also translated from Arabic the Qu’ran and illuminating Sufi material, as well as translations from Greek and old Irish classics. His gift with languages was phenomenal.

I was privileged to study academically with Dr. Cleary for a year, 1986-87, including three courses, in Zen, Taoism, and Huayan Buddhism. His classes led to my studying for a Masters Degree at California Institute of Integral Studies (CIIS) in San Francisco, where I enrolled initially for the opportunity to study with him. He was an insightful, brilliant lecturer. In the first class in his Zen course he said that the aim of learning Buddhism is to learn about learning, and to maximize receptivity to reality although no complete formulation of reality is possible. I enjoyed several lengthy individual conversations with Cleary while walking from CIIS, back then in the Haight-Ashbury, to the Civic Center BART, where he took the train back to his East Bay home. During this year Cleary also taught two very popular classes at San Francisco Zen Center, which I also attended.

Any account of Cleary’s translations must commence with his monumental rendition of the Avatamsaka (Flower Ornament) Sutra, more than 1600 pages, one of the most stimulating of Mahayana texts. It is replete with luminous visions of bodhisattva activity and exalted experiences of mind and reality, conveyed with lush, psychedelic, evocative imagery. As the inspiration for the Chinese Huayan teachings (Kegon in Japanese) it is highly influential for all East Asian Buddhism. In his Huayan class I attended, Cleary mentioned that he recited aloud the entire Avatamsaka Sutra in Chinese seven times before he started translating it. Cleary’s Entry into the Inconceivable is one of the most valuable books on the dialectical Huayan philosophy, providing translations of the dense, profound writings from the Chinese Huayan founders. As with most of his translations, Cleary’s introductory commentaries are extremely informative. END_OF_DOCUMENT_TOKEN_TO_BE_REPLACED 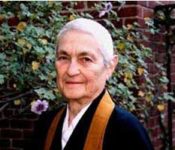 END_OF_DOCUMENT_TOKEN_TO_BE_REPLACED

Lay ordained by Reb Anderson, FukuDen John Briggs was a regular practitioner at No Abode, Green Gulch Farm, Valley Streams Zen Sangha in Sacramento, and a resident at Tassajara in fall 2006 and 2010.

END_OF_DOCUMENT_TOKEN_TO_BE_REPLACED 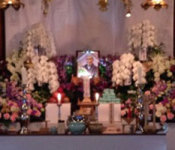 “So many of you expressed your love for and remembrances of Mitsu Suzuki upon hearing of her death on January 9, 2016 that I wanted to tell you about the beautiful ceremonies that were held for her in Japan, which I attended,” writes Central Abbess Eijun Linda Cutts.