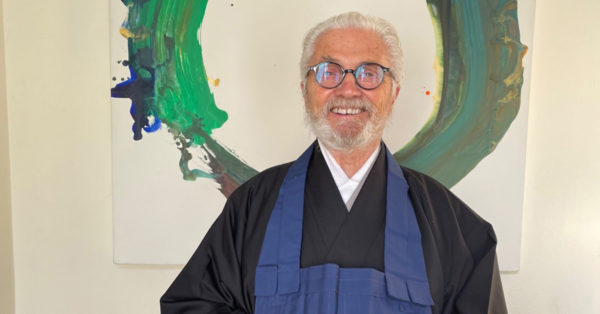 It took Roger Hillyard 40 years to begin his formal Zen practice but once he started, he wholeheartedly engaged in Sangha life. If you are inspired by Roger’s story to explore life in a Zen temple, consider one of our many Guest Student and Apprenticeship opportunities at Green Gulch Farm, City Center, and Tassajara (summer months). Stays can be as short as two weeks; longer commitments are also possible.

A friend brought Roger to Meditation in Recovery in 2007. “I came that one night and have never left. My practice grew from there. I never thought I could meditate. I learned it’s about being present.”

At that time, Roger was living in Potrero Hill, above Farley’s, the cafe he opened on March 17, 1989. He began coming to SFZC daily at 5:00 am and would return in the evening for zazen, sometimes followed by dinner and a class or a dharma talk.

In 2011 Roger decided to retire and turned Farley’s over to one of his sons. He moved into City Center and soon began to curate the monthly art shows and learned to ring the bells for evening zazen. He was invited to serve on the SFZC Board. When the Tenzo (head of the kitchen) took a leave to participate in a three-month practice period at Tassajara, Roger was invited to fill in for her. As it turned out, he was asked to stay on in that role for a year.

Roger then decided to go to Tassajara to participate in a practice period led by Furyu Schroeder (the current Green Gulch Farm Abiding Abbess). Entranced by her teaching, Roger moved to Green Gulch “to study with the elders there.” He held the GGF Conference and Retreat Center Manager position for a year-and-a-half and then returned to Tassajara for a second practice period led by Senior Dharma Teacher Paul Haller. After the practice period, Roger moved back to City Center and managed the bookstore, and then became the Shika (guest manager), which involves looking after overnight guests and booking conferences in the Conference Center adjacent to 300 Page Street.

City Center is Roger’s “home temple” and he enjoys being in the city, closer to family. He often spends weekends in his small house in Bolinas, “a refuge from the refuge.” 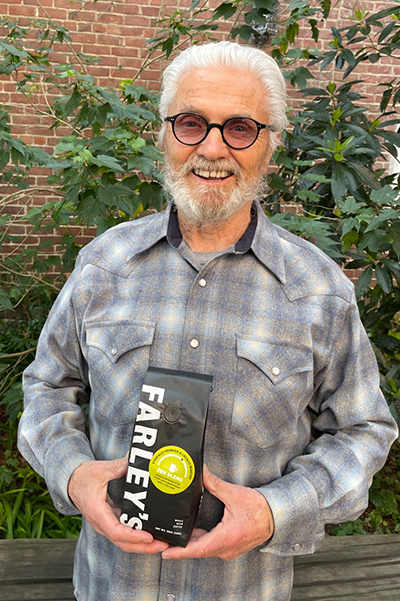 While Roger was still working at Farley’s, his Zen practice and his work in the cafe influenced one another. At SFZC, he learned and experienced being more present, and this carried over to his work life and interactions at Farley’s. When Roger initially opened Farley’s he didn’t want it to be a coffee house where people hung out. He intended to sell only coffee beans and accessories. Before long, he decided to “let Farley’s be what it wanted to be – a community.” Farley’s became people’s living room and office, a place where they could relax and meet others. Several couples originally met there, married, and had children. Some of those children later worked at Farley’s.

Roger was reinforced and energized both by his Zen practice and his work at Farley’s. He brought the attributes he developed at Farley’s—his ability to welcome people and make them feel comfortable—to his SFZC work. He supervised crews of students with whom he had warm relationships. This was also the case when he ran Farley’s. “Crews I’ve worked with have enjoyed themselves. People worked hard and worked well. They bonded, creating a sense of sangha.”

Roger enjoys it when his Zen life connects with his Farley’s life. Many Zen practitioners are regulars and Farley’s supplies coffee to City Center, Green Gulch Farm, and Tassajara.

In fall 2021, Roger was shuso (head student) for the City Center practice period led by Abbot David Zimmerman. That experience affected him deeply. “It created a willingness within me. I can be resistant and unwilling. As shuso, I was so busy, I had no room for resistance. I was totally immersed in being shuso, ready and able to do whatever was asked of me. To experience that willingness for three months was unique.” Earlier in his life, Roger found it difficult to understand the meaning of “taking refuge in sangha.” Now he sees it more clearly. He has been living it.

Roger received his Dharma name in 2009 from Shosan Victoria Austin: HenZan ToRoku, Universally Seeking/Receiving the Stream. Throughout his life, Roger explored various spiritual approaches. He felt he “received the stream” when he was shuso. Roger would like to become a lay teacher; he considers the lay practice path to be extremely important.

Farley’s Coffee is featuring SFZC in their “non-profit of the quarter” Give Back Program. Starting now through April 2022, for every bag of Zen Blend or Give Back Blend coffee or for every Zen Box purchased, Farley’s will make a $5 donation to SFZC. Coffee can be ordered through the Farley’s Coffee website or in person at their Bay Area locations. For more information and to order.