Note: Tim Buckley, SFZC alumnus and an early student of Suzuki Roshi, passed away on April 17, 2015 (more info). This article about Tim originally appeared in Sangha News in April 2011. Tim was the leader of the Branching Streams affiliate Green River Zendo in West Bath, Maine. 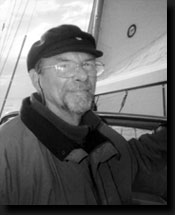 Thomas “Tim” Buckley, Jokan Zenshin, began sitting with Suzuki Roshi at Sokoji Temple in Japantown in 1965. He describes himself and his old friends from that time as a band of “street hippies and desperados.” Tim has been participating in the spring practice period at City Center and after sesshin he will return to his home in West Bath, Maine, where he now lives with his wife, Jorunn Jacobsen Buckley, a professor of religion at Bowdoin College. In January, after a long and colorful career as a cultural anthropologist specializing in the Yurok Indian people of Northern California, Tim received priest ordination with Reverend Peter Schneider, another Zen Center friend from the early days.

Zen Center acquired Tassajara in 1967 and Tim was part of the first Zen Center summer guest season. He practiced at Zen Mountain Center for two years. “Suzuki Roshi asked me to ordain as a priest and stay at Zen Center but I said no. I wasn’t prepared at that young age to take on lifetime vows. Now that I look back, when I said ‘no’ to Suzuki Roshi, I think I really said ‘yes’.” Tim left Tassajara with Emily Bragdon. They married and had a son, Jesse, and later parted.

After Suzuki Roshi died, Tim began studying with Harry Roberts. Among the Yurok people, adoption is a custom of aligning yourself with someone with whom you share a sense of kinship. Harry was born in 1906 and was adopted as a nephew by a highly trained Yurok man, Robert Frank Spott. Robert and his sister, Alice Frank Spott, had been adopted when they were children by a Captain Robert Spott, the headman of the town of Requa in Northern California on the Klamath River. Requa was an important trade town where river people and coast people of the Yurok tribe met. Robert Spott saw the potential in Harry, when Harry was just 11, to become a “high man,” a spiritual counselor and teacher, and he trained Harry for about 15 years in the ways of the Yurok action and knowledge. Later, Harry adopted Tim as his nephew. Tim felt a deep affinity for Harry, as he had for Suzuki Roshi, and treasures the time he spent with him.

“Harry knew welding and blacksmithing, he knew how to plant redwoods, how to make duck egg custard, and how to tat a tea towel. He had that practical, botanical and horticultural knowledge that he shared with us at Green Gulch Farm. But he also had a profound spiritual understanding of the world. He taught me to be a man. For Yuroks, that is the first thing you need to do if you are a male person. That is what you need to learn before you can take on any higher men’s spiritual training. First, you have to know who you are.

“Harry taught me that human beings are born afraid and that a big part of training is to develop physical and spiritual confidence. Babies are born with the innate ability to acquire language. They are born with a sucking reflex, so that they can take nourishment. And they are born with a fear of falling, a fear of being dropped. So we have a proclivity for fear. In order to grow up, to be a whole person, we need to render that fear irrelevant. Harry’s central teaching was, ‘Pay attention, from moment to moment. Get ego and desire out of the way.’ This is really important in hunting and gathering societies. And of course it is also central to our Buddhist practice.

“What does it mean to be a ‘man,’ pegerk? It means to become an independent person that others can depend on, whether you are male or female. Alice Spott was considered ‘a real man,’ numi pegerk. These things should also happen in serious Zen training. Not a blustery egoistic confidence, but confidence and trust in our Buddha nature. Harry and the old people trusted the original condition of the world, what he called ‘Beauty.’ We could call it, ‘That which is,’ or, ‘All of it.’”

Harry Roberts encouraged Tim to become an anthropologist. Having studied Asian Art and Buddhism at Harvard as an undergraduate, Tim entered the University of Chicago where he received his PhD in cultural anthropology.

“It was at that time that I took ownership of my intellect. I admitted that I loved to read, to argue closely, and to write,” he says.

He began his formal doctoral research with the Yurok in 1978. He has been active in that community for over 30 years, first as a researcher, and now as a friend and family member of the tribe. Tim taught anthropology and American Indian studies for many years at the University of Massachusetts in Boston, and he is also a gifted photographer. When he returns to Maine, he intends to create a small community zendo in his home.

Tim says it is important to recognize that each path is unique and has its own integrity. At the same time, he sees a resonance between Buddhism and the Yurok way, especially in ceremonial life. His Buddhist training helped Tim understand the Yurok elders in a way that sometimes surprised them.

“If you are committed to the Dharma, you’ve already moved away from a European world view, a Christian world view. You have begun to see the world in a way that isn’t characteristic of those cultures. I grew up in a strict Episcopalian family, a very conservative war-torn family. Given the circumstances of my childhood, ‘The First Noble Truth’ didn’t come as a surprise to me. I became interested in studying Buddhism when I was about 17 and never stopped. Now I don’t think in terms of reconciling being a Buddhist priest with the great privilege I feel in having been able to be a witness to Yurok life. This is just my life.” 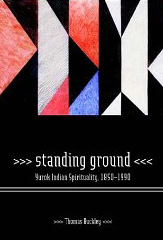 Tim (Thomas Buckley) published Blood Magic, a book he edited with Alma Gottlieb, in 1988, in which he explored women’s menstrual rituals and practices. It was an important book in that it blew the lid off theories of menstrual “taboos” in the field of anthropology. “I was afraid that Yurok women might tease me to death about taking up this topic but they were grateful that someone was interested in their lives.” His book Standing Ground came out in 2002 and focused on Yurok men’s and women’s spiritual training.

Laura Burges is a lay entrusted teacher in the Soto Zen tradition who lectures and leads retreats at different practice centers in Northern California. A teacher of children for 30 years, she brings mindfulness practice to elementary classrooms. Laura co-founded the Sangha in Recovery program at Zen Center, and she is the abiding teacher at the Lenox Meditation Group in Oakland. Laura will be leading the class “This Very Mind is Buddha” at City Center, May 7- June 4, 2015.