Summary and Slideshow of the 2013 Tassajara Fire
by David Zimmerman, Program Director

A week ago and just days after the fifth anniversary of the 2008 Basin Complex Fire, fire returned to Tassajara. On Wednesday, July 17, at approximately 1 pm, a wildfire started in the Ventana Wilderness at the confluence of the Tassajara and Church Creek watersheds, less than two miles upstream from the center of Tassajara. The fire grew in a short period of time to a total of 213 acres.

Almost immediately after the fire was reported by a civilian aircraft, the US Forest Service (USFS) deployed four air tankers, five helicopters and over 200 fire personnel to the scene and began dropping significant amounts of flame retardant and water in the area. (Retardant was used only in elevated areas to avoid the risk of contaminating the creek.) Fire crews were trucked in and also dropped in by helicopter to begin the work of cutting fire lines and clearing brush, which was very challenging due to the extreme nature of the terrain. Because the same area had burned in the 2008 Basin Complex fire, there were lots of dead trees and snag, which provided ready fuel for the new conflagration and made passage up the creek for the firefighting crews difficult. 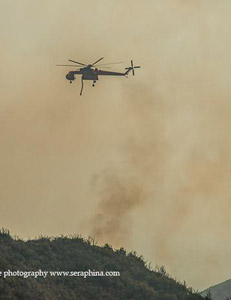 At a specially convened meeting of residents and guests mid-afternoon that Wednesday, CalFire Captain Colette O’Connor informed both everyone that, although the center was not under imminent threat, Tassajara was subject to an immediate voluntary evacuation alert, and the sole 14-mile dirt road into the monastery was closed to travel by incoming guests. While a number of the center’s guests departed at the onset of the fire, many chose to stay, and residents tended to the guests amid the intensity of the firefighters’ comings and goings. Greg Fain, Head of Practice, shared that during the evening service’s dedication of merit, “a helicopter flew right over the zendo so close that the whole building was shaking, and we chanted the All Buddhas, Ten Directions… extra, extra loud!”

Steady Focus through the Week

Over the next several days various fire crews continued their efforts to manage the fire, making slow but persistent progress in containing the spread. Throughout the fire, an engine crew was stationed in Tassajara as an ongoing safety measure for the purposes of structure protection. The crew worked alongside the residents to clear brush around the campus and increase Tassajara’s fire preparedness.

While the weather conditions on the afternoon of Friday, July 19, were more dangerous than anticipated, becoming hotter and windier, the fire crews were able to further reduce the fire to 60% by the end of the day, and then to 90% by Saturday evening. On Sunday, given the high degree of containment, crews began the work of “suppression repair, trash backhaul, patrol and mop-up,” signaling that the fire was coming to closure. On the following day, the Tassajara road officially reopened with no restrictions of any kind on travel, and the USFS began pulling resources to other fires. A couple of crews were to remain in the valley for about a week to monitor the fire until it is completely extinguished. By the end of the day on Tuesday, July 23, seven days after the fire had started, the fire was officially contained. Fortunately there were no injuries save for one firefighter who sustained a chainsaw wound to the hand and was airlifted out of the area. There was also no damage from the fire aside from its impact on the wilderness. The cause of the fire is still unknown.

The response by the USFS was remarkably different from that in 2008 during the Basin Complex fire. At that time resources were being stretched thin due to the unusual number and severity of fires in California. Recent shifts in government policy also affected decision making around structure protection. The Basin Complex fire (as noted in a recent SNW article commemorating the fifth anniversary) took almost three weeks to finally arrive at Tassajara, and eventually merged with the nearby Indians fire to become the third largest fire in California history. When the fire eventually threatened the Tassajara road on July 9 that year, the fire crews on site chose to evacuate, as well as most of the residents. However, five monks returned mid-evacuation and were able to defend most of Tassajara when the fire finally arrived in full force the next day.

Meanwhile, Back behind the Gate

Tassajara Director Linda Galijan reported that the mood in the valley throughout the recent fire was very calm and peaceful. Carrying on with work, practice and the usual schedule, the residents were open and flexible to meet the requests of the moment. The remaining guests were curious and interested in what was happening with the fire, but were all quite relaxed and at ease. Some of them confessed that they enjoyed having the valley virtually to themselves. The dining room was dubbed “Café de Feu” (Fire Café) and offered an unusually intimate dining experience. Greg Fain shared that fire personnel and residents alike had been “very kind to one another and our guests who stayed on with us and shared the adventure. The practice at Tassajara has been very strong all summer long, and having this small fire burning in our neighborhood for a few days was a lens for looking at our practice, for which I am grateful.” 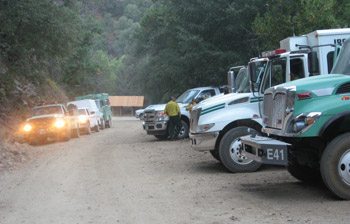 Despite repeated offers of food, showers and anything else Tassajara could offer, fire crews often declined. This is part of their training—not to take advantage of anyone they are assisting. Finally, the sangha decided to bake several hundred chocolate chip cookies, put them in bags with some of Tassajara’s own bread, and set them out by their vehicles so they could take them on the buses back to their camp. It was reported as a real pleasure to see their enjoyment.

SFZC and Tassajara are deeply grateful for the all-out effort made by the USFS and CalFire to protect the community during the Tassajara Fire. We are indebted to their courage, skill and deep concern for the land and people. We know that fire will return to the Los Padres National Forest and to Tassajara, and it is Zen Center’s ongoing intention to work collaboratively with the Forest Service and other government agencies whenever this happens again to ensure the safety and well-being of the monastery, the residents and guests, the courageous crews who engage the fire, and the beloved Ventana Wilderness.
__________

A fuller, day-by-day account of the fire has been recorded on SFZC’s website here.
David would like to acknowledge the support of Linda Galijan and Greg Fain in providing details for this article.