Hoitsu Suzuki has been godo, head of training, at Eiheiji in Japan for the last several years. His last day at Eiheiji was October 15. Hoitsu, Shunryu Suzuki Roshi’s son, visits San Francisco Zen Center periodically, often to assist with large ceremonies, such as the Stepping Down and Mountain Seat ceremonies in February 2012. 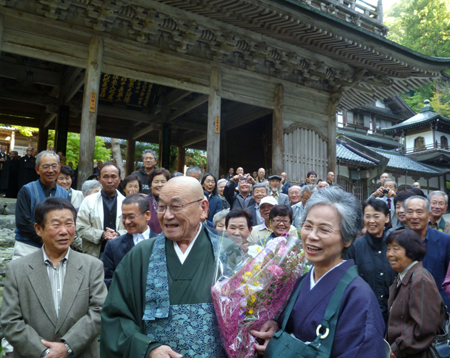 This article, below, was posted by David Chadwick, author of Crooked Cucumber: The Life and Zen Teaching of Shunryu Suzuki, on cuke.com, “an archival site on the life and world of Shunryu Suzuki and those who knew him,” maintained by David.

Hoitsu is referred to as Hojo-san, a Japanese term used to refer to the head priest of a temple, usually in his temple. The photo used in this News posting was included in the article along with several others.

I learned of the trip that the sangha of Rinsoin were planning for Hojo-san’s return and decided to crash the party, so to speak. In all, 120 people were there to welcome him back from his seven and a half year stint at Eiheiji training the young monks. It was a wonderful opportunity to see Eiheiji and we were invited for a special opportunity to sit during the morning service in which Suzuki Hoitsu Roshi was the Doshi.

Before the service, Fukuyama Taiho Zenji, the current head priest of Eiheiji was teary eyed as he very sincerely talked about how much Hojo-san will be missed by all at Eiheiji, especially the unsui, since Suzuki Hoitsu Roshi was by far the most liked and admired of all of the head monks. Fukuyama Zenji also talked a bit about Hojo-san’s father, Suzuki Shunryu Roshi and acknowledged his important contribution to spreading zen to the west. I was impressed and touched by the sincerity of Fukuyama Zenji’s words and was amazed when he almost broke out crying towards the end of his speech to the Sangha, since it was a very rare show of emotion for a Japanese man, especially for a person of his standing.

A short while after the service, the head priests at Eiheiji stood inside the Sanmon gate, said their goodbyes and watched as Suzuki Hoitsu Roshi stepped outside the gates and performed three final prostrations towards the Hondo of Eiheiji. As the monks applauded and waved, we were lined up along the steps leading down the mountain and cheered and were elated to be there to witness this special moment.