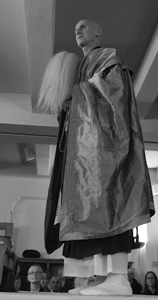 After nine years of abbacy at Zen Center, Ryushin Paul Haller stepped down as City Center Abbot in a formal Stepping Down Ceremony in the Buddha Hall on the evening of February 11. The formal occasion was accompanied by warm expressions of appreciation and gratitude from the Zen Center administration, honored guests, family, friends, and students. In an affectionate acknowledgement of Paul’s love of poetry, Zen Center President Robert Thomas read W.S. Merwin’s “On Each Journey,” which begins “As on each journey there is / a silence that goes with it / to its end let us go / with each other.” Following on a comment from Hoitsu Suzuki, Paul said he is looking forward to the next “mountain.”

The following afternoon, Kiku Christina Lehnherr was formally installed as the City Center Abiding Abbess in a Mountain Seat Ceremony [part 1 and part 2]. The ceremony included several ritual moments, choreographed with processions and the sounds of inkin, clackers, and drum. The “stepping up” abbess also offered statements at significant locations throughout the temple and during the ceremony in the Buddha Hall. On entering the temple, Christina pronounced, “The door is round and open where the two worlds touch. No inside, no outside; no coming, no going. May this gate be welcoming to all beings, always.” 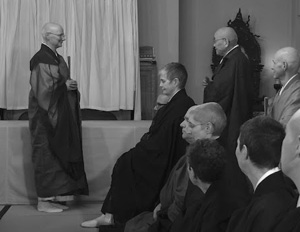 Attending the Mountain Seat were members of Christina’s family, who had traveled from Europe to be present for this momentous occasion. Congratulatory remarks were offered by the abbots and former abbots, friends, family, honored guests, and Christina’s partner, Marsha Angus.

Hoitsu Suzuki, Shunryu Suzuki’s son, was also present for the ceremonies. He visits from Japan periodically to guide, assist, and train us in performing and coordinating these important ceremonies and the warm, light-hearted presence of both Hoitsu and his wife, Chitose, is always a pleasure for us.

In these two special ceremonies, the entire sangha experienced anew the powerful generosity and wisdom that emerged with Suzuki Roshi and flows forth through the transmission of the Dharma, which has marked Zen Center’s continued development as a Buddhist institution in the West. 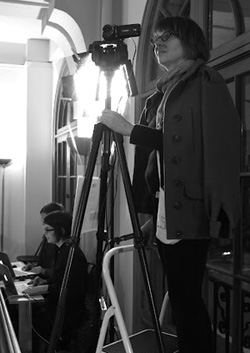 Both ceremonies, as well as Hoitsu’s February 11 Dharma talk, were video live streamed.