Sobun Katherine Thanas, founder of the Monterey Bay Zen Center and student of Shunryu Suzuki Roshi, Dainin Katagiri Roshi, Zentatsu Baker Roshi, and Tenshin Reb Anderson, died on June 24 surrounded by loved ones and disciples, after sustaining a head injury that had left her in a coma.

A memorial service was held at the Carl Cherry Center for the Arts in Carmel on Tuesday, June 26.

Weekly memorial services were held after zazen each Sunday night thru August 12 at the Santa Cruz Zen Center including the culminating Eye-Opening Ceremony and altar memorial tablet dedication August 12.

A stupa dedication and sprinkling of ashes is planned at Tassajara in 2013.

A memorial ceremony to honor Karin Sobun / Katherine Thanas, and marking 100 days since her passing from this world, will be held at Green Gulch Farm on Sunday, September 30, at 3pm.

Tenshin Reb Anderson will officiate. The ceremony will include planting a live oak tree on the hillside below the new student housing at Green Gulch Farm.

Everyone is invited. The ceremony will be followed by a reception.

In lieu of flowers, her family and close friends have requested that donations be made to The Santa Cruz Zen Center, The Monterey Bay Zen Center or one of the many organizations she supported, listed at the bottom of the memorial page at SCZC.

A memorial ceremony to honor Karin Sobun / Katherine Thanas, and marking 100 days since her passing from this world, will be held at Green Gulch...

END_OF_DOCUMENT_TOKEN_TO_BE_REPLACED 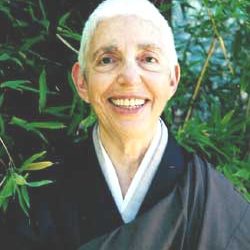