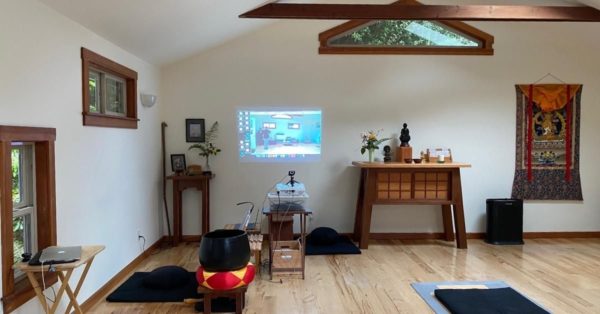 In 2019, when I became the liaison for Branchings Streams (the Zen centers and sanghas in the Suzuki Roshi lineage), my predecessor and mentor Steve Weintraub encouraged me to visit as many centers as I could. There are over seventy in the United States and ten in other countries. I took his advice to heart, until the pandemic put a stop to travel and nearly all the centers began meeting virtually. Before the pandemic, I had a yen to visit Branching Streams groups in the Pacific Northwest. I put that idea on hold, although I never forgot it. 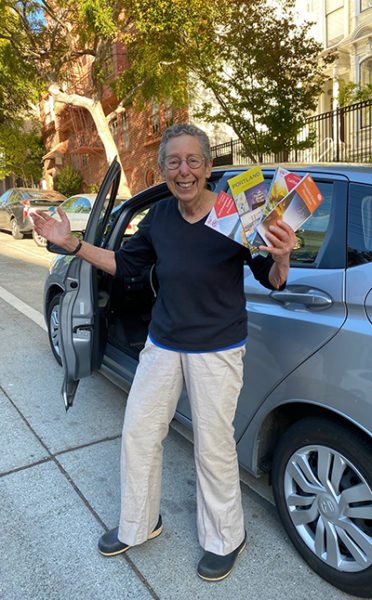 Finally, this summer I began planning my trip. I decided to drive and visit four Zen centers in the Suzuki Roshi lineage in Arcata, CA; Ashland, OR; Bellingham, WA; and Vancouver, BC. It would be a seventeen-day journey. I set out on September 23 and traveled over 2,300 miles in my trusty Honda Fit.

In addition to the four Branching Streams Zen Centers, I visited Shasta Abbey in Mt. Shasta, CA and Great Vow Zen Monastery in Clatskanie, OR, spent time with dharma friends in Eugene and Portland, hiked in an old-growth redwood forest, and explored the Oregon Coast on my way back to San Francisco. The trip felt like a pilgrimage to me.

My first stop was the Arcata Zen Group, named Rinshinji, Forest Heart Temple, by Maylie Scott, who began teaching in Arcata at the invitation of the sangha in 1989. The history of Arcata Zen Group goes back to the 1970s. Maylie became the guiding teacher in 1991 and continued as guiding teacher until her death in 2001. Several teachers supported the sangha over the next thirteen years until Gene Bush was invited in 2014 to be the Head Teacher. Gene teaches at Santa Cruz Zen Center as well. He invited me to visit Arcata during his 11-day September residency.

When I entered the zendo for the first time I noticed the spacious, uncluttered feeling, as well as the image of a computer screen projected on a white wall. Currently most events at AZG are both in-person and online. Masks are worn in the zendo. As is the case in many Branching Streams sanghas, some members live at a distance, or have health or family issues that make it difficult for them to participate in person. Gene is encouraging a return to in-person participation. Some new practitioners are joining the sangha.

Arcata Zen Group’s property includes a building that houses a library, dokusan room, kitchen, and storage space, as well as two apartments that are currently rented to local college students. The grounds include an apple orchard and a memorial garden created by Marcia Lieberman, a SFZC lay teacher who spent two weeks with the sangha pre-pandemic.

After leaving Arcata, I drove over mountain roads to the town of Mt. Shasta. The snow-capped mountain seemed to float in the sky over the town, and over Shasta Abbey, founded by Rev. Master Hōun Jiyu-Kennett, a British woman who had studied in Japan. I was welcomed by the current Abbess, Rev. Master Meian Elbert. After a tour of the zendo, kitchen, and other buildings, we sat outside, within view of the magical mountain, for tea and a large home-made chocolate chip cookie. The Abbess fondly remembered Zenkei Blanche Hartman, who had once visited.

As I was approaching Ashland Zen Center, Siskiyou Sansui Do, a sign I could see from the road advertised “A Little Zen Farm Stand.” Inside was an offering of produce, potted plants, lavender sachets, cards, and other items for sale on the honor system. Guiding teachers Stacey and Ramana Waymire live on site with their teen-age son. After I offered incense in the zendo, they showed me the extensive vegetable and flower gardens and several residential buildings. We enjoyed figs, raspberries, and vegetables from the garden for dinner.

We were joined by the founding teachers, Jintei Harold Little and Etsudo Patty Krahl, who now live in a nearby city. Now in their 70s, Harold and Patty were curious about whether other Branching Streams sanghas were thinking about or planning for teacher retirement. They ordained and gave Dharma transmission to Ramana and Stacey and have stepped back, although there are still seats for them near the zendo altar.

In addition to a daily schedule of zazen, service, and work for residents and community members, Ashland Zen Center provides opportunities for Student Residency to those who wish to practice there for short or long periods of time as well as opportunities for Guest Retreat to those seeking refuge within a Buddhist community.