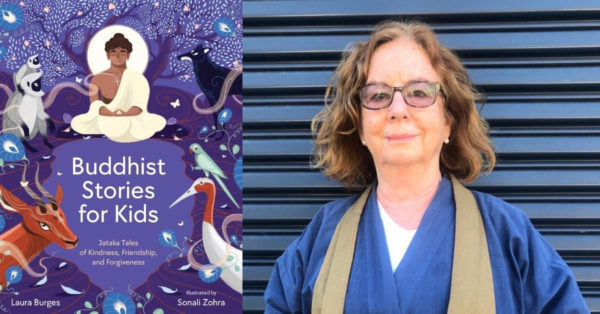 As a child, Laura’s father read to her and her mother told her stories. Laura herself first began telling stories to children in a one-room schoolhouse at Tassajara Zen Mountain Center, and later to her daughter Nova. Those experiences inspired Laura to become a teacher of young children.

Laura received her credential and began teaching third grade in 1985. She would often offer story time to a hundred children gathered in a large music room at her school. ”As soon as you say, ‘Once upon a time …’ you have them.” She’d suggest that the children “make a movie in your mind of what I’m saying,” and would prepare by reading a tale from Grimms’ Fairy Tales to herself several times. Then she would tell the story without using the book.

Laura incorporated elements of those stories into the Jataka Tales, in which the Buddha recounts his many lifetimes before he was born as Shakyamuni Buddha 2,500 years ago. There are more than 500 of these stories, compiled in six volumes by E.B. Cowell over 100 years ago. At the San Francisco Public Library, Laura pored over the volumes (they can’t be checked out), read about a hundred tales, and selected ten that she thought would appeal to and encourage children.

In the original tales almost all the characters are male. One, called “The Monkeys in the Bodhi Tree,” was originally about a male teacher and his adult students, who were monks. Children love stories about animals, so she changed the characters to a wise Monkey Mother and her many children. Laura created dialogue and descriptions to bring a playful element to the tales.

Trees play a significant role in each of the stories Laura chose. Laura considers trees to be great teachers; “Today we know so much more about the secret life of trees, how they support each other underground by mingling their roots, feeding one another through fungal pathways. Diversity is a strength among trees. If we could celebrate our own diversity, instead of demonizing anyone different than ourselves, we would be so much stronger and happier as a nation.”

“As a child I sought solace from trees. I loved to climb trees or sit at their base.” She grew up in Pleasant Hill in the East Bay. One childhood house had a willow tree. She could climb up and read in the tree. “No one knew I was there.” Trees are a significant theme in the life of the Buddha, who was born under a tree, was awakened under a tree, taught under trees, and died under a tree.

Although the book is recommended for ages four and older, Laura sees it as a book that children can read over and over; the stories will come alive as they grow older. She also wanted adults to enjoy reading the stories aloud. They are folk tales that are universal. Each story ends with a “gem” that offers food for thought.

Laura appreciated working with the illustrator, Sonali Zohra, who comes from Bangladesh and is familiar with the trees, animals, and folklore of that region. The lively, full-color illustrations appeal to both children and adults.

When the pandemic began in 2020, Laura had just retired after thirty-five years of teaching. She devoted much of the last three years to writing. She has written two more books that will be published by Shambhala in 2023. Zen for Kids, 50+ Activities and Stories that Will Shine Loving-Kindness in the World, will come out in spring; The Zen Way of Recovery will be available in summer.

A Zen student since 1975, Laura Burges received lay entrustment from her teacher Eijun Linda Cutts in 2009. Her Dharma name is Ryuko Eitai, Abundant Cultivation, Flower of Serenity. She is grateful for Eijun’s inspiration and support.