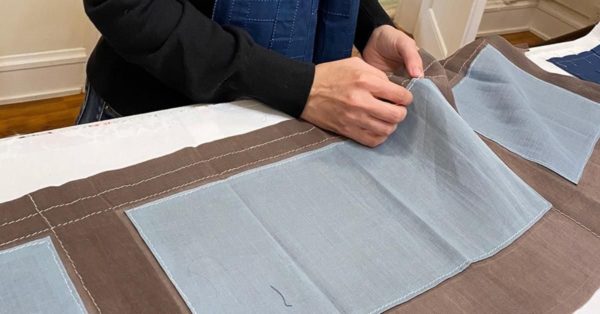 In March 2023, Mako Voelkel will be installed as the City Center Abiding Abbot, Tenzen David Zimmerman will move to the position of Central Abbot, and Jiryu Rutschman-Byler will be installed as the Green Gulch Farm Abiding Abbot. The ceremonial robes for Mako and David are being sewn in the City Center sewing room; the robe for Jiryu is being sewn at Green Gulch Farm.

Sewing teacher Tim Wicks likes to begin sewing ceremonial okesas for abbatial leaders a year in advance of their Mountain Seat Ceremonies. Tim perceives these robes as gifts from the community to our spiritual leaders. It takes a while to organize the sewing projects. In the past, the sewing teachers have chosen the fabric; now the recipients choose their fabric and that can take longer. “There may be some technical challenges with a new design or a fabric we haven’t worked with before,” said Paula Pietranera, who is apprenticing with Tim to become a sewing teacher. “We figure out how to solve them together.”

Ceremonial robes are made to fit the person who will be wearing them. The recipient is measured, and then the size of all of the pieces can be calculated. Robes are made of long panels of cloth, called jo in Japanese, each panel made of three or four pieces. The okesa for Mako will have nine panels; David’s okesa will have eleven. Each piece is individually lined. This tradition was begun by an 18th century priest, Jiun Onko. “It takes almost as long to pin, baste, and stitch all the lining pieces to the outer fabric as it would to sew an okesa [for priest ordination]. Making a lined robe takes almost as much time as sewing two okesas,” Paula explained. 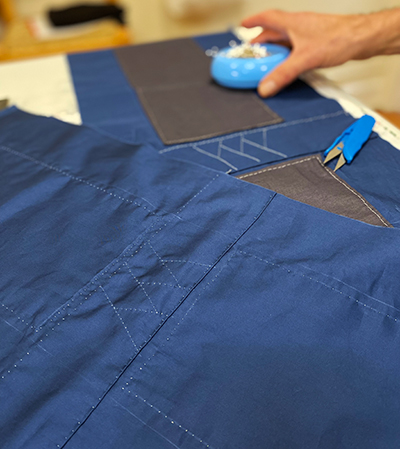 Detail of stitching with birdsfoot stitch. Photo by Paula Pietranera.

Abbot David’s robe will have a design element called birdsfoot, found in a book by Kyuma Echu Roshi (Study of the Kesa), which diagrams a number of birdsfoot and horsetooth patterns. Sewing teacher Yuko Okumura has re-introduced these pattern elements to the robe sewing tradition. At SFZC only two okesas with the birdsfoot pattern have been made. The first is a robe Kathy Early made for Eijun Linda Cutts when she stepped down from serving as Central Abbess. The second was made for Abbot Ed Sattizhan in the City Center sewing room when he became Central Abbot.

Tim and Paula agree that the birdsfoot pattern is not merely decorative. It has a spiritual or mystical meaning, as it creates openings in the okesa. Something passes through the gaps. “People don’t do such things randomly,” Paula noted. Both “birdsfoot” and “horsetooth” refer to animate beings.

Tim and Paula teach the basic stitch to students who want to work on the robes and are new to this kind of sewing; “namu kie butsu” (taking refuge in Buddha) is spoken internally with each stitch. Paula enjoys seeing how the different panels students are working on are coming together. “You can tell the stitches are different—each person’s stitches are identifiable—but they are part of the whole. It’s like hearing different voices coming together as one when we chant.”

Tim sees this as “a tactile expression of the dropping away of the self. It’s community based. Our Abbots hold the most senior positions in the community; sewing their robes is deeply moving.” Tim wants to include as many students as possible in sewing these robes, as they may not have another chance to do so: Mountain Seat Ceremonies only occur every four to seven years.

Several people come to the sewing room once or twice weekly to work on the robes, including Chloe Atraya, Florian Brody, and Ilaria Tassi. Paula is there every Tuesday and Thursday evening. Diane Wells comes from Monterey twice a month. “The devotion of these people is astonishing,” said Tim. “One could think they have a special relationship with the Abbot who will receive the robe. That isn’t the case. They simply want to offer support.” Tim always wants to thank the abbots. “We wouldn’t be doing this practice without their encouragement.”

“It’s the power of the robe, and the role the robe has in our practice. Sewing is part of lay and priest ordination and dharma transmission. When you sew your own robe, you are physically sewing yourself into the sangha. People feel it internally even if they don’t talk about it.”