For Rosemary Jordan, the new CEO of Enso Village, the Zen-inspired senior life plan community being developed in Healdsburg, it was an unusual way to spend the Labor Day holiday. She arrived at City Center that Monday evening expecting something unfamiliar. However, she felt a sense of recognition through the architecture of 300 Page Street, designed by Julia Morgan, from her experience of Julia Morgan’s buildings in the East Bay.

Susan O’Connell, currently Enso Village’s Spiritual Director, was awaiting her arrival and in the lobby was a packet which included her room key. When she went to her room on the third floor, on the door was a card with a written note, which added to her sense of being expected and welcomed. 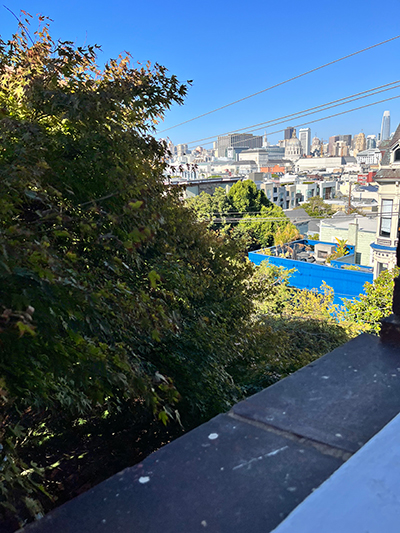 View of the City from her guest room

When Rosemary entered the room, she was delighted by the view of the City through the branches of the maple tree in the courtyard. She had a sense of being both indoors and outdoors, and the juxtaposition of urban and rural. “Where am I?” she wondered. It was the same with the city sounds—honking car horns and the throb of the freeway traffic contrasting with the quiet courtyard. This encapsulated her whole experience at City Center.

Rosemary had both a visual and auditory experience of zazen in the zendo the next morning. The sitting began in darkness and ended as daylight was coming into the zendo. Similarly, when she began sitting the zendo was in total silence. A while later she heard honking horns, garbage trucks, and a motorcycle revving up. Rather than feeling annoyed by the sounds, she opened to them and decided to see them as a gift from the world. What if the person on the motorcycle was excited about their day and was heading out on their way to do something that might change the world?

Several people assisted her in finding her seat in the zendo, and showed her where to stand for service in the Buddha Hall. Susan had told her there is no simple way to be ready for the forms for getting on and off the tatami mats. “I’m very process oriented, and it was a refreshing reminder of how many parts of life can’t be planned for. I stood in the wrong spot and kicked someone behind me. In watching others I appreciated the human body and what practice can develop. I realized how much I have to learn.”

She noticed that someone was cuing the priest who was leading service and later learned that the priest is deaf. Rosemary considered it a wonderful expression of inclusion. She has worked with people who have visual or hearing impairments and is sensitive to these needs for future Enso Village residents.

Rosemary’s work practice assignment at City Center was sweeping and mopping the kitchen floor. “I got very intimate with a floor that has such a long history. It’s rare in the world we live in that we get to focus so completely on one thing. I tried to get very good at cleaning that floor—and realized that it will never stay clean.” She observed the way kitchen crew members moved with awareness of the other workers. She wondered about the possibility of bringing the activity of a group of people cleaning together to the Enso Village community.

Rosemary noticed the way the kitchen drawers were organized and labeled, with everything in its place. This way of caring for things could carry over to Enso Village. She also discovered a new way of chopping chard and found it deeply satisfying to separate the long leaves from the spiny bits. This made her think about how the vegetables will be prepared at Enso.

At City Center, Rosemary had opportunities to speak with residents informally. “I was taken that people of different ages and at different points in their Zen training were interested in and excited about Enso Village.” Some asked difficult questions, which Rosemary welcomed, as she is committed to open communication. Others simply thanked her for taking the position of CEO. She doesn’t feel she deserves the thanks, as she has just arrived. Rosemary feels lucky to be entering the process at this late stage of bringing Enso Village to life and is grateful to those who have been working on it for years.

At the end of her day at City Center, Rosemary had dinner at Greens restaurant with senior residents from City Center and Green Gulch Farm who will be living at Enso Village. She and Susan O’Connell then went to Green Gulch Farm, driving in darkness. She noticed the attention given to exterior lighting there and felt welcomed by the lovely room that had been prepared for her. She got up early the next morning to sit in the zendo, and appreciated the spectacular shadows on the walls. She was surprised to hear the crashing of waves and a foghorn and wondered if there was a sound machine at work; she later learned both sounds were genuine.

That day happened to be the morning when all the residents go to the fields after one period of zazen to hoe, weed, or harvest. Rosemary was assigned to harvest spinach. “I’ve never been so close to spinach—pulling it out of the ground and putting it in a box that would go to the farmers’ market. I was amazed by how much the team of people working together were able to harvest.”

During a break, Rosemary followed the path to the ocean. She read the interpretive signs along the way about the coastal Miwok, some of whom had been forcibly relocated to the area in Sonoma County where Enso Village is. She was impressed by the renewal of the creek and the return of coho salmon, an encouraging message about how things can be brought back.

Later in the day Rosemary attended “an extraordinary tea ceremony” in the Green Gulch teahouse, hosted by Meiya Wender, who had made a special sweet treat for the occasion. Other guests joined, some of whom, like Rosemary, were new to tea ceremony, and others who were relearning it. She felt at ease as she was not the only beginner.

For more information about Rosemary, please see this profile on the Enso VIllage website.