The ceremony had two parts. In the first, Nancy received a green rakusu and lineage papers. In addition to the traditional lineage of male ancestors, she received the lineage of women ancestors. She also reaffirmed her deep desire to live according to the Sixteen Bodhisattva Precepts. 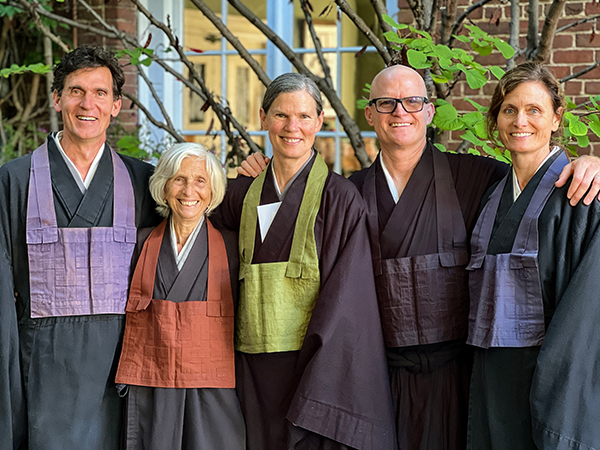 In the second part, Nancy shared a statement and then expressed her teaching in a mondo, a formal question-and-answer exchange in which family members and friends, including her daughter Olivia, asked her a question and she responded. This was followed by statements of appreciation from long-time dharma friends, her husband Myles Cowherd, and her teachers.

Nancy loves the forms and ceremonies of Zen practice. She went over the ceremony many times beforehand. Knowing the ceremony by heart allowed her to fully enjoy the day when it arrived, and to feel “carried by the forms.” When she was on the dharma seat with sangha members and guests she had invited, she felt the intimacy of it, especially during the mondo. “Our questions and answers are about meeting one another,” bringing the Dharma alive in the interaction. “When we’re turning the question ‘What’s the most important thing?’ it’s not about getting the answer right. It is about a willingness to step forward, to see and be seen.”

In Nancy’s statement before the mondo, she focused on the theme of giving, as it occurs in Dogen’s essay, “The Bodhisattva’s Four Methods of Guidance.” She also worked with a question that could apply to any of us, “What is the true path that brings us into maturity in our Bodhisattva vows?” Dogen says, “You give yourself to yourself and others to others.” What is it to completely give ourselves over to the Dharma, to give ourselves over to what is being asked in any moment?

“I found my path by continuing to cultivate the tender growing edge of my practice. Can full maturity as a teacher be in the lay realm as well as the priest realm?” For Nancy, the answer is yes. 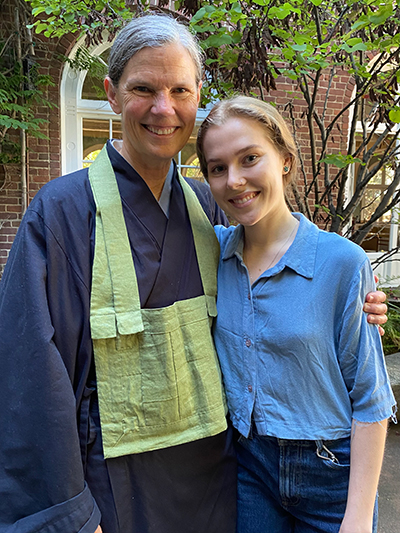 Nancy with her daughter Olivia. Photo by Tova Green.

An aspect of the ceremony that was rich in meaning was receiving the document with the names of Zen’s women ancestors, which had been designed by Shosan Victoria Austin. The wrapper was calligraphed in red ink with the words “Completely Honored” on the front side, and “Emerge” on the other. Shosan used the word “emerge” because years ago it was said to her that, as a woman entering a male lineage, women are called to emerge. Nancy noted, “We’ve been cut off from our women ancestors.”

Some people have asked Nancy why she entered the path of lay teacher entrustment rather than ordaining as a priest. She feels that priest ordination would separate her from those she is called to work with. When she first practiced at Green Gulch Farm, she met many mature practitioners who were lay. Their practice was so physical—some of them worked on the farm and in the garden. She was drawn to the fields during the first four years she lived at GGF. “Working on the farm growing vegetables, growing food, was incredibly healing for me.”

Nancy’s Dharma name is Horin Raika, dharma forest/bringing harmony given to her in May 1998 when she received Bodhisattva initiation (lay initiation or jukai) from Eijun Linda Cutts.