Sukey Parmelee’s first visit to Green Gulch Farm was in 1973, soon after San Francisco Zen Center purchased the property from George Wheelwright. She was living in Berkeley and had read in the San Francisco Chronicle that people could walk through a “Zen farm” to Muir Beach. She remembers walking among cattle grazing on the grass-covered hills.

She came to live at Green Gulch in Fall of that year and stayed two years, working on the farm and in the kitchen. George Wheelwright had raised cattle on the land for many years. The native vegetation had been sprayed with 2-4-D (like DDT) and planted with Australian grasses for grazing. The creek was held in a narrow concrete channel going straight down the valley to the ocean. There were no trees along it.

Sukey moved to Tassajara, then City Center, and back to Tassajara to care for the children there. She met Mick Sopko and his daughter Anna. They became a family and moved back to City Center, where they lived for twelve years. Mick worked at the Tassajara Bakery. Sukey enrolled in gardening classes and was mentored by a gardener who passed projects on to her. 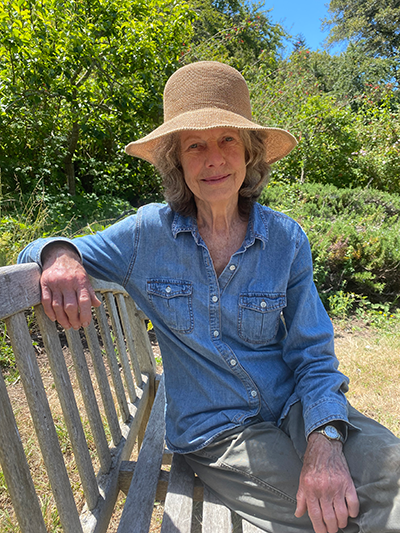 In 1993, Sukey was invited to take care of the 1½ acre Green Gulch garden while the Head Gardener, Wendy Johnson, was writing her book, Gardening at the Dragon’s Gate. Sukey was Head Gardener until 2001, when she proposed that she be involved in the care of the land (100 acres) outside the garden and the farm. This request evolved into the opportunity, along with a small crew, to create and maintain gardens on the grounds and to work on restoration along the creek. She worked with the National Park Service, who were involved in a restoration project at Muir Beach.

In December 2005, a Green Gulch Farm resident, Erin Merk, spotted two large red fish in the creek. From her description, Sukey realized they were probably a mating pair of Coho salmon. She alerted the Park Service, and Bill Cox of Fish and Game, the person who came to investigate, estimated that there were 500 to 1000 young fish in the creek. Coho had not been seen in the creek for many, many years.

This discovery coincided with a plan to free the creek from the straight concrete channel George Wheelwright had constructed. The presence of the salmon supported SFZC’s ability to raise funds for the creek restoration project. Sukey established monthly Watershed Work Days and Work Weeks, so that local people who knew the creek could work on its transformation and support the crew from Prunuske Chatham, Inc., who oversaw both the design and implementation.

Redwood trunks with root wads attached were laid into curves of the new creek bed, supported by boulders, and willows were planted to provide shaded places in which young Coho could hide and find food. In the last few years, drought has reduced the number of young Coho seen.

When Wendy Johnson was head of the garden, she initiated school tours of the farm and garden, which Sukey continued. She received a grant to bring children from underfunded schools in Marin County and Oakland to visit Green Gulch Farm. Between 2003 and 2019, 35 to 50 tours were done each year. The crew also hosted a one-week summer day camp for several years.

The Farm and Garden Apprenticeship program was initiated in 1995. Every spring, this program brings about twelve apprentices for the six-month growing season who want to learn about organic farming and gardening. Many stay on.

Sukey senses intimately the miraculous way a seed grows. “Isn’t it a miracle that a seed somehow opens, partakes of what it needs, and takes a certain form? We say we’re one with the universe. I can see it in a seed. Experiencing this has to do with ‘the one who is not busy’.” She was quoting words that former Abbot Myogen Steve Stücky included in a poem which is on both the Farm and the Land altars:

Now as I enter this day of activity,
Fully engaged in helping others,
Let us remember the one who is not busy
And be free from self-clinging.