To listen to this talk, “Think The Unthinkable,” see the Suzuki Roshi Audio Archive where it is listed on the right side.

This talk was given by Suzuki Roshi at Tassajara on December 4, 1967. 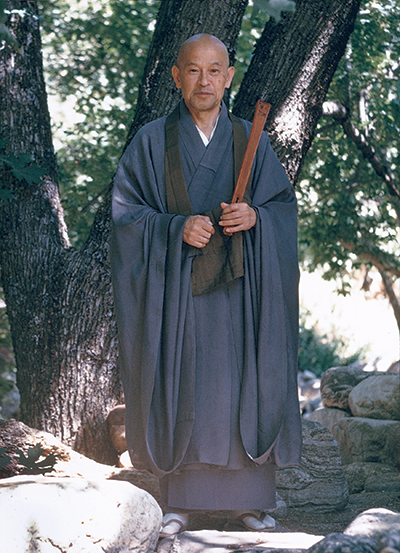 This talk comes from the middle of the second sesshin at Tassajara, in December 1967. Unlike the extreme heat of the summer sesshin, students would have been grappling with long hours of sitting in the cold, as the zendo did not get any direct sun in the winter. Not all the talks from the week are available – if Suzuki Roshi was lecturing twice a day, which he typically did in sesshin, we are missing one talk from the second day, and both talks from the third. This talk, from the fourth day, had somehow been overlooked, despite being on the same reel as the existing talk from the second day.

During the week, Suzuki Roshi had two overlapping themes. For the first time, he turned his attention to “Fukanzazengi,” one of Dogen’s earliest texts, in which he sets out not just the method for sitting zazen, but its value and pivotal role in Buddhism. Several talks include Suzuki Roshi reading and commenting on passages of the translation by Reiho Masunaga.

Alongside this, he was talking about the hara, or tanden, as a point of focus during zazen, in a way that he did not do in any other lectures; perhaps he felt that a monastic sesshin was the only appropriate time to be teaching about this, even as he details how energy in the hara is ” the most important practice for oriental arts even” (6:53).

This focus allows the student to develop stability and inward strength, which, combined with the powerful silence of sesshin, creates the possibility of understanding that everything is part of one’s own mind: “To study something is to find out what you have learned before. To hear something is to hear what you have studied. And in this way your mind always develop itself by itself. Nothing from outside comes into your mind. All the activity is the self-activity of your own mind.” (10:16)

Having established this context, Suzuki Roshi guides his students through the koan at the heart of the “Fukanzazengi,” in this translation rendered as “Think the unthinkable. How do you think the unthinkable? Think beyond thinking and unthinking.”

He suggests “usually when you think, you think about something. But thinking mind—if your thinking mind directed opposite way, that is to think unthinkable. Your mind is still clear, but there is no object.” (37:47). He follows Dogen’s example, first by making a very concrete analogy to allow the mind to grasp what is hard to grasp. The sun is always just shining, he says, but if an object appears, the sun will be shining on that. Then he also uses one of Dogen’s typical methods, turning what appears to be a question into a statement, as he suggests Dogen himself is doing by asking “how do you think the unthinkable.” “How is the way,” Suzuki Roshi insists, before going on to conclude “unthinkable thinking is how.”

The invitation to his students, in the middle of this week of intensive sitting, is the same as Dogen’s exhortation in his writings: don’t imagine you can grasp one answer and be satisfied with it; investigate further.