Susan Moon, Zen teacher and writer, has just published Alive Until You’re Dead: Notes on the Home Stretch, in which she takes up the Buddhist subject of mortality, wondering, “What does it mean to be an old human being who is going to die?” She shares stories from her life, illustrating the vitality that can come from within, sometimes unexpectedly, even as our bodies fail.

Much has changed for Moon in the twelve years since her first book on aging, This is Getting Old, was published. “I was a baby at aging then. I wasn’t suffering from anything difficult. Now I am really feeling my aging.”

Moon considers herself fortunate. “I’m in good health—and I have many friends who are not.” She is grateful for her knee replacements and her lens replacements, but she gets tired much sooner, her cognition is not as sharp as it was, and she thinks more slowly. She worries about her brain and about not being able to keep track of things.

Most importantly, Moon, now 79, is considering death. “We are mortals. Knowing I’m going to die enlivens me. Because I’m more aware of my impermanence, I’m more present in the moment … Although I have fewer moments ahead of me, each moment has more time in it. I’m not trying to start a career, build a house, or start a family. My to-do list isn’t as important as it used to be. I can enjoy my friends, family, and my grandchildren. I feel gratitude for being alive.” 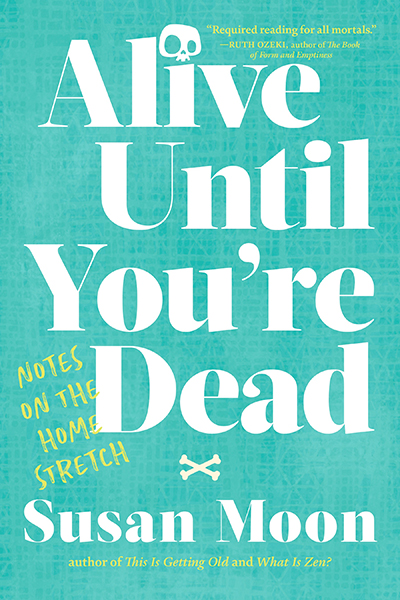 In Alive Until You’re Dead, Moon explores mortality in many ways. She learned from being present at the death of a dear friend that “death is outside of time,” yet found that “the death of someone close to you is like an alarm bell: Wake up! This is it! Do what you care about! Love is what matters.”

Forty years after her beloved maternal grandmother died at the age of 81, Moon acquired and transcribed the diary she had kept for the last few years of her life. In one of the essays, Moon describes how moved she was as she read of her grandmother’s preparations for death. Her grandmother’s remarkable life and death heightened Moon’s awareness of death as a passage similar to birth.

Moon delved into many contemplations about death, including the Buddhist text The Five Remembrances, walking in cemeteries, reading obituaries, and making a Day of the Dead altar in the Mexican tradition. In experiencing the Day of the Dead in Oaxaca, Mexico, she saw how porous the line between life and death is in Mexican culture.

Facing mortality is also about facing impermanence and interconnectedness. “Zazen practice and dharma teachings embrace impermanence. Understanding that I’m not separate helps me face death. My body is a wave in the ocean, the same water as the rest of the ocean, connected to everything. Time is so plastic now and sometimes I feel that I’m both young and old at the same time in any given moment. There’s a sense of mystery. These things are not knowable in logical ways.”

As she ages, Moon experiences a diminution of ego. “I can’t say it’s all gone, but I’m not so focused on getting what I want, and I can turn my attention more naturally to others.”

Aging hasn’t changed her concern about injustice in the world or the climate crisis, but her response has changed. “Yes, I still offer my skills, I still write letters and demonstrate and consider how I can help, but I believe it’s also important for old people to get out of the way of young activists. We need to listen and support them. We might have been cutting-edge in the 1960s. Now young people are leading the way, they’re more inclusive, less linear. They are more savvy about gender definitions, for example. I’m culturally old, and I’m excited about what I can learn from young people.”

“I feel readier to die now. I’ve already had a good share of time. To be old opens doors in a way I didn’t expect. Being closer to death, I can let go of a lot.”

In celebration of her book, Susan Moon and Ando Jaune Evans will offer an online workshop, Dancing with Impermanence Together, on Saturday, June 18, including readings from the book, conversation, and writing exercises.

Alive Until You’re Dead: Notes on the Home Stretch can be ordered from SFZC’s online bookstore.