April 8, 2022
Buddhism Is Not a Special Teaching; Enlightenment Is Not a Particular Stage: Awakening the Archive, Tape 17
Arts & Culture | Features | Giving | Zen Practice

To listen to this talk, “Buddhism Is Not a Special Teaching; Enlightenment Is Not a Particular Stage,” see the Suzuki Roshi Audio Archive where it is listed on the right side.

This talk was given by Suzuki Roshi at Tassajara on August 23, 1967. 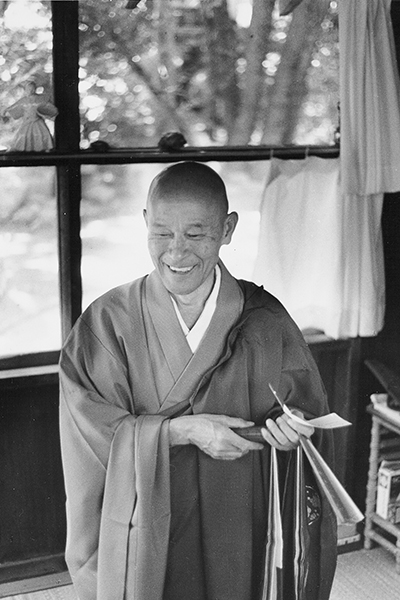 Suzuki Roshi in the abbot’s cabin at Tassajara, c. 1969

About halfway through this sesshin talk, you can start to hear crickets in the background, getting louder over the remaining twenty minutes. They are a typical backdrop to a summer evening talk at Tassajara, but in this case, throw doubt on the established data. Even though this sesshin was well-documented (you can read the contemporary accounts in the Wind Bell – p13), and the talks were all transcribed the following year, some mysteries remain.

This is the fourth track from the reel given the Engage Wisdom serial SF-05134, and the box it was found in only had three tracks listed, one of which was a discussion. Luckily, another box from the same sesshin (SF-05135) had a listing of four tracks, and the reel within it contained three tracks, including a discussion, so it seems pretty clear they had been mixed up at some stage. If you look at the photograph, the date on the box for this fourth track is August 23 (though notably in pencil as opposed to the other three). The other reel also has a talk dated August 23, and there are also crickets to be heard, so also an evening talk.

At the end of this talk, Suzuki Roshi mentions that he will give one more talk on “this fascicle,” (the “Genjo Koan”)—which he did, in “the last lecture of this sesshin” as it was noted—though the date for that one is not evident on the reel or the box. The original transcript gave the date as the 24th, the same day as the lecture with the discussion, and also the shosan ceremony (for which we do not have any audio). The transcript for the shosan ceremony has Suzuki Roshi referring to “this afternoon in my lecture” where he told the story of Zuigan (which he told in the “last lecture“), so we can be clear that those are the same day, which suggests that the discussion took place a day before these two events. Beyond that, there is the fact that the seven-day sesshin only has talks listed from the 20th to the 24th, so it is very likely the last lecture and the shosan were actually at least one day later than the transcript indicates, on the 25th.

There is also the fact that Suzuki Roshi mentions in this talk that Maezumi Roshi, from the Zen Center of Los Angeles, would be giving “some lecture”—which presumably he did, although no tapes of these have been found; there are also no existing talks or transcripts dated from the 22nd. It also seems that Suzuki Roshi is referencing a missing talk during the other talk listed for the evening of the 23rd: “As I said this morning, in deference to Maezumi Sensei’s talk last night …”

All of which is to conclude that perhaps this talk was given on the evening of the 21st, rather than the 23rd as previously written, and that perhaps there are more treasures yet to be uncovered from this ground-breaking event.

Much of the lecture is given over to the extended, very concrete, analogy of the bird and the fish in the “Genjo Koan” (p60 in the same Wind Bell). The point is to practice where we are, in the elements we find ourselves in, without thinking beyond this:”So before you try to figure out what it is, you should practice it, you should live in the water and in the sky, that is how you study Buddhism. Not by trying to figure out what it is intellectually, but with all of your mind and body, you should practice our way.” (8:30)

Suzuki Roshi cautions his students at the beginning of the talk not to be looking for “some particular way” for themselves, but to understand that they are part of a long continuity of practice and understanding which, nonetheless, in a typically Dogenesque expression, “has not carried over from the past, and it is not merely arising now” (in the translation currently used at SF Zen Center). Suzuki Roshi discusses this in terms of both continuity and discontinuity, as he had when discussing other sections of the “Genjo Koan,” both during this sesshin, and the year before at Sokoji.

He goes on to posit, of course, that they should continue to practice, even if the benefits do not appear—at least to their conceptual knowledge. The way into this deep understanding that Dogen sets out is by letting go, not by trying to grasp it: “What you see, what you understand, in term of concept, is not always true. This is the secret of Buddhism.” (33:22)