NOTE: Tape 13 will not be included in this series, but is available in the Suzuki Roshi Audio Archive, listed on the right side.

To listen to this talk, “Genjo Koan,” see the Suzuki Roshi Audio Archive where it is listed on the right side.

This talk was given by Suzuki Roshi at Tassajara on August 20, 1967. 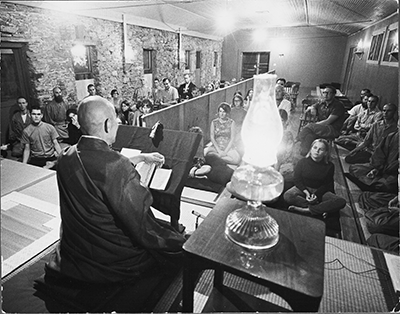 Suzuki Roshi lecturing in the old zendo at Tassajara. Photo by Minoru Aoki.

The acquisition of Tassajara in 1967 was a huge leap for SF Zen Center. Suzuki Roshi had long been interested in finding a suitable location for a monastery; an early Wind Bell mentions a trip to Jenner for that reason 1962, when Zen Center was a brand-new non-profit. Many sites were subsequently investigated, but Tassajara fit the bill. The initial intention was to buy the Horse Pasture land nearby, and build on that, but when the hot springs resort became available, it was the obvious way to go.

In 1966, Zen Center’s operating budget was around $8,500. Now, $150,000 had to be raised, but such was the embracing spirit in the culture in San Francisco at the time, that the sums materialized, and Zen Center had its monastery.

For Suzuki Roshi, it was the perfect place to transmit the monastic practices that had been followed in Japan since the 13th Century, using Dogen’s well-recorded guidelines, with sustained practice periods offering a strong container for students to deepen their understanding. For his students, it offered the opportunity to live alongside Suzuki Roshi in an ongoing way that was not possible in San Francisco, and to learn from him not just on the teaching seat (some of the early reports in Wind Bell contain descriptions of appreciating how Suzuki Roshi worked with rocks).

The tapes for the initial seven-day sesshin, held in August 1967, one month after the official ceremonial opening of the monastery, were among those recently rediscovered. While transcripts were available, these recordings offer the opportunity to hear Suzuki Roshi expounding for the first time his vision of monastic practice for his Western students, and his explanations of the various questions that they had come up with as they threw themselves into more intensive practice for the first time.

The talks are well-labeled, though the dates span only five of the seven days, and it seems that the boxes may have been switched—one of the reels yielded four tracks, the other three, so the photographs show the boxes that match this. This talk has been variously noted as the first of three talks that Suzuki Roshi gave on the “Genjo Koan” during the week (he had already spoken about the text several times the year before at Sokoji), but also possibly the last, since he is commenting on the last paragraphs of Dogen’s work—the dates and track listings support the former.

There are intertwining themes that run through all the talks that he gave during this sesshin: he starts this talk discussing form and emptiness, and various permutations of this recur throughout the talks. There are commentaries on different passages of the “Genjo Koan,” many references to the “Prajna Paramita Sutra,” and also clear explanations to help his students see how all parts of their daily life in the monastery supported their practice and their understanding.

When he is talking about the story that concludes the “Genjo Koan,” it is noticeable that Suzuki Roshi is not just offering a commentary on the meaning of the master fanning himself, but also using concrete examples of Tassajara and San Francisco to bring home the point.

As the days go by, he is ensuring that the students not get big ideas, but focus on the most important thing: to be aware of just where they are and just what they are doing: “You should appreciate, moment after moment, what you are doing right now, under some condition. And first of all, you must know under which condition you actually are.” (22:14)

Here he is paraphrasing other well-known lines from the “Genjo Koan”: “When you find your place where you are, practice occurs, actualizing the fundamental point. When you find your way at this moment, practice occurs, actualizing the fundamental point.” This was the gift that Suzuki Roshi and Tassajara offered.