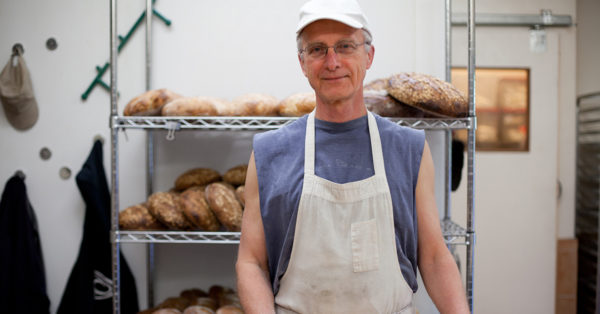 Mick Sopko began baking bread at Tassajara Zen Mountain Center in the summer of 1980. Baking bread has been his focus for most of the over forty years he has lived and worked at San Francisco Zen Center. Mick lived at City Center and worked at the Tassajara Bakery in Cole Valley for twelve years, then moved to Green Gulch Farm in 1993, where he continued to bake bread (with the exception of eight years of administrative work, including being Ino and co-director).

At first bread baking was done in the Green Gulch Farm kitchen. The baker shared counter space, the walk-in refrigerator, and ovens in a very busy kitchen. At some point it became clear that bread baking needed a dedicated space.

In 2007, GGF worked on a business plan and decided to build a bakery, supported by a generous donation. The bakery, attached to the GGF kitchen, has a small deck oven, mixer, walk-in refrigerator, a long table and sufficient space for racks, ingredients, and storage. Mick makes almost three dozen different kinds of bread. The basic bread is flour, water, salt, and natural sourdough starter or yeast. There are different flours and ways of processing the dough to get different flavors and textures; bread types range from elegant to rustic.

Mick bakes in the traditional way, which takes two or three days. A pre-dough is made on the first day. More flour is incorporated on the second day to make the final dough. Loaves are formed and then proofed overnight in the refrigerator, and baked the morning of the third day. This method improves both flavor and texture.

The tradition of bread baking is over 6,000 years old and spans many cultures. Before bread, there was porridge. Baking transforms grains into more portable forms, such as loaves and rolls. Bread baking is also a San Francisco Zen Center tradition. The Tassajara bakery was SFZC’s first business. Before that, Ed Brown’s The Tassajara Bread Book, published in 1970, was widely read and used, and was often an inspiration for people to visit SFZC. Suzuki Roshi used bread baking as a metaphor for practice in Zen Mind, Beginner’s Mind, in the chapter “Repetition.”

“Bread is made from flour. How flour becomes bread when put in the oven was for Buddha the most important thing. How we become enlightened was his main interest. In order to find out how dough became perfect bread, he made it over and over again, until he became quite successful. That was his practice … Once you know how the dough becomes bread, you will understand enlightenment.”

Mick sees bread baking as a good metaphor for patience, attention to detail, and change. “When I’m working in the bakery, I’m part of the bread. I can enter each stage, mixing, fermenting, baking. I think about how intention can enter the workspace and the product. It has positive energy. Bread is a messenger; it expresses patience, care, and attention. You feel it; it’s something that is done well, like some of the buildings at Green Gulch that were built with so much care—the guest house or the Wheelwright Center.”

Mick enjoys the scale of the GGF bakery. “We’re local. We know many of the people who pick up our bread.” Sixty people in nearby Muir Beach order bread weekly. GGF delivers bread to two local restaurants and two groceries, one in Sausalito and one in Mill Valley. They also sell bread at the Mill Valley farmers market. When people came to GGF for conferences prior to the pandemic, they could order bread to take home, and it was sold after Sunday morning Dharma talks. 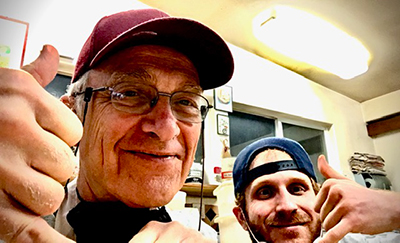 After eight years of Mick being the primary baker at GGF, the administration created a full-time Baker’s Apprentice position. Students worked with him full time for a year. They received thorough training and some made it their career after leaving GGF. Mick has also trained Tassajara and City Center bakers.

Over fifteen years the Green Gulch Farm bakery has produced 250,000 loaves and brought in a million dollars in revenue (half of that covered expenses).

Mick will retire in a couple of years, at which time he and his wife Sukey Parmelee plan to move to Enso Village. At this point Mick doesn’t know whether the bakery will continue after he leaves. In many ways it’s the ideal situation for a bread baker. It’s small and the situation is flexible enough for experimenting; it’s a good testing ground. And there’s Zen practice and community.

Mick was lay entrusted by Zoketsu Norman Fischer in 2005. Norman gave him the dharma name DaiKo JoShin, Great Drum, Quiet Mind. Mick enjoys drumming and sees it as another mindfulness practice; each beat is important, beat after beat.

Mick appreciates the support of the SFZC community to maintain the bakery. The legacy and energy of baking bread is important to him. “It’s in the fabric of Zen Center as an activity and a metaphor. It’s ordinary work, timeless work. It’s a privilege to have been part of it.”

Suzuki Roshi said, “We should be interested in making bread which tastes and looks good! Actual practice is repeating over and over again until you find out how to become bread. There is no secret in our way. Just to practice zazen and put ourselves in the oven is our way.” In this sense, Mick is a practitioner who has become bread.