NOTE: Tapes 10 and 11 will not be included in this series, but are available in the Suzuki Roshi Audio Archive, listed on the right side.

To listen to this talk, “Real Calmness Is In A Noisy Place,” see the Suzuki Roshi Audio Archive where it is listed on the right side.

This talk was given by Suzuki Roshi at Sokoji on Saturday, March 26, 1966. 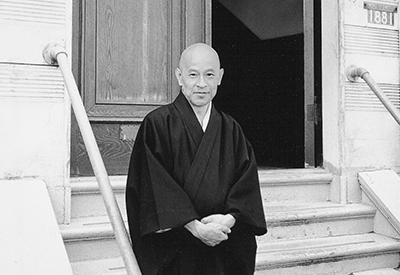 Suzuki Roshi on the steps of Sokoji, circa 1962

This talk is another example of a track that was somehow overlooked for many years, while the two other talks on the same reel were cataloged. The written notes on the box for the reel suggest that only the 1:00 pm talk of that day was available, as the other lecture was “goofed up during recording,” and indeed the second previously known track is beset by the same audio interference as other talks from the first part of 1966. This talk, though, is clearly from the end of the one-day sitting, and is also fairly audible.

Suzuki Roshi opens by saying that sitting all day is “not a matter of something unusual for us any more.” There is a real sense, with this talk, that he is speaking with a fairly consistent group of practitioners, and skillfully bringing them along in their practice. He touches on some of the same themes that he did in other talks from this period: this is a rare talk where he mentions “beginner’s mind” (you can click on the keyword, on the Engage Wisdom page (see link above), to see the others), five months after he talked about it during another one-day sitting at Sokoji (10/16/65), and in the more famous talk in Los Altos (11/11/65). He also dwells on calmness in the midst of activity, evoking the theme of his talk to the Los Altos group (8/26/65). And he explicitly acknowledges having talked about the “double moon” before—which he had done both at Sokoji (8/28/1965) and Los Altos (1/6/1966).

At the same time, he is very clear that he is less interested in a systematic kind of teaching than in the “unique feeling” that can be created in a sangha, in the same way that he says we can have a “renewed feeling for zazen” each time we sit all day. He uses tea ceremony—which he is touchingly candid about—as a way of evoking the feeling that can be created through rituals which might seem “rigid and formal.” And in the wonderful closing paragraphs, he talks about his role as a teacher. He is in turns playful, with his comparison to a “mother tiger”; self-deprecating; teasing, with his suggestion that his students read the entire Shobogenzo to understand what he is saying; and finally encouraging: “I think we are lucky to have so many friends in this zendo.” As a practice place, it may have been in the midst of traffic, and the noise of the city, but what he was building there was special, and enduring.