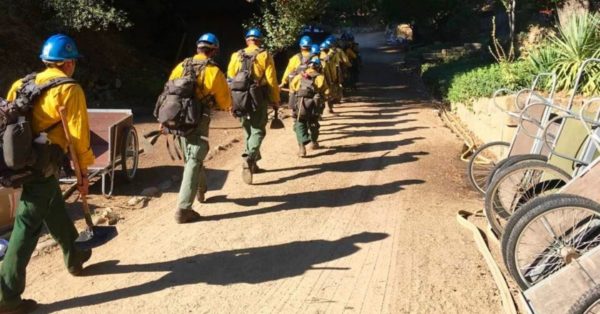 This January, Tassajara was scheduled to host an eight-day retreat for thirty-three wildland firefighters. Plans for this retreat had begun in 2020, prompted by requests from firefighters who had spent time at Tassajara defending it from fires and who were aware of the extreme stress in the community of firefighters. The retreat was canceled due to the rapid spike in Covid cases across the country.

The facilitators of the retreat, Lee Klinger Lesser and Chris Fortin, and their team of five (their bios can be found here) decided to offer a three-day online retreat instead. I spoke with Chris and Lee a few days after it was held.

The online weekend retreat had eleven participants. “Participants were ripe and ready,” according to Lee. One participant had been badly burned. Another had been on a crew in which nine members were killed. One worked with family members of those who had died.

The retreat was designed to foster rest, refuge, and renewal through learning practices that could be sustained after the retreat, acknowledging grief and creating community and sangha among the participants. Everyone was asked to create an altar before the retreat with an object that symbolized connection.

Early in the retreat participants were asked to speak about what they love about firefighting. “Being with others who have a heart of service.” “I love being with like-minded, single-focused people on a mission, being one small part of a larger instrument that serves the community and nature as a whole.” It was rare to have the opportunity to speak with one another about what they loved and about the hardships in their work. One participant said, “We’re so much alike.”

Participants also shared the losses they had experienced, including deaths, illness, and divorce, and participated in a grief ritual. They wrote who or what they had lost on prayer flags and later hung them outdoors. They learned about Jizo Bodhisattva, a protector of firefighters who is often depicted with singed robes from going into the fires of hell. JIzo’s great vow is to save all beings; participants were invited to find their own vows.

Reflecting on the weekend, Chris and Lee noted that it meant so much for participants to be with other people with hearts of devotion. The group is dedicated to service. Firefighters are a tight-knit community but don’t get together in circumstances where they can be vulnerable. There has been an escalation in suicides and mental health issues among firefighters and many suffer from PTSD. Minimal support is available. Stressors are increasing, such as longer fire seasons and larger fires; indicators of the continuing impact of the climate crisis.

Chris and Lee, with the help of the SFZC Communications department, have created the Wildland Firefighters Resources website to encourage connection and ongoing support. They emailed monthly practices throughout the past fire season to firefighters on the line and now will be able to post a practice every month on the website.

New dates are being set for an in-person gathering in January 2023. The teachings will continue to focus on the paramitas, the “perfections” or “transcendent virtues”: generosity, morality, patience, energy, meditation, and wisdom. And they have added a book by Pema Chodron, Living Beautifully with Uncertainty and Change, that was donated by the Pema Chodron Foundation and mailed to all those who had registered for the January retreat that was cancelled.

Lee appreciates the opportunity to do this work. “It’s a beautiful thing to feel useful, to feel the gift of what is unfolding for participants. We create a container in which people—and we facilitators—can show up.” After a retreat she takes time to digest and honor all that has touched and moved her: “The participants in the retreat become part of me and expand my world. I feel really nourished. I give myself a couple of days to let it seep in.” Chris is happy to be doing this work with San Francisco Zen Center. It’s a way of extending her Zen bodhisattva practice into the world.

Chris and Lee agree that the program has been successful because firefighters initiated it and are helping to shape it.

They especially want to acknowledge Tassajara’s Abiding Teacher Leslie James, Director Lauren Bouyea, and Ino (head of the meditation hall) Krista De Castella for unhesitatingly supporting the firefighters’ retreat, and their disappointment when it couldn’t happen in-person this year.