Lea Seigen Shinraku is a licensed Marriage and Family Therapist who found her time as a resident at SFZC to be an invaluable step in her search for purpose and identity. If you are inspired by her path, you may want to consider one of our many Guest Student and Apprenticeship opportunities at GGF, City Center, and Tassajara (summer months). Stays can be as short as 5 days; longer commitments are also possible.

In the late 1990’s, Lea Seigen Shinraku knew she had a distorted view of her life—particularly in terms of judging herself—but she didn’t know what to do to see more clearly. She was working at a corporate job that felt wrong, and she constantly criticized herself for not knowing what would feel right; for not having answers. On a trip to Death Valley, California, an acquaintance mentioned Zen Mind, Beginner’s Mind by Shunryu Suzuki and pulled out a worn copy. Lea borrowed the book and finished reading it by the end of the long weekend.

From her first reading of Suzuki Roshi’s teachings, Lea felt an immediate connection. His emphasis on not-knowing especially stood out because uncertainty and not having answers was a major theme for her. It was the first time, in words, that she had come across the teaching that not-knowing was not a problem that needed to be solved. Instead, she saw that “not-knowing is actually powerful and a truth about being alive.”

Lea took Zen Mind, Beginner’s Mind as a handbook of Zen practice. After the trip, she began meditating with Suzuki Roshi’s instructions, at first making what she felt was a realistic commitment: five minutes a day.

Zazen had a subtle and powerful effect. After a few years of sitting, Lea quit her corporate job and found work teaching English in France. But she didn’t know what she would do when her teaching job ended. It felt very precarious for her to be in her mid-30’s and “to not have that figured out, or much figured out at that point.” She knew that Tassajara was considered a special place to practice Zen, so she applied and was accepted to live and practice there for the summer.

Transformation and Clearing the Static at Tassajara 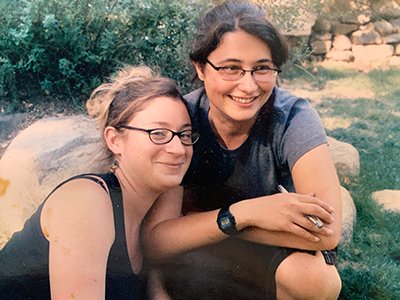 The next six months of practice in the valley of Tassajara were massively transformative. Lea was the bathhouse attendant and participated in the regular practice schedule of meditation and ceremony with the rest of the residents and shorter-term students.

In addition to the regular schedule, Lea was part of a writer’s group that she formed with other students and residents. They met once or twice a week for a 40-minute period of writing in silence together, and then talked about their experience. This was a deeply healing time where she re-connected with the power of community and creativity. The friends she made almost twenty years ago are still friends today.

While she was at Tassajara, Lea also met regularly with the Tanto (head of practice and mentor to students). She participated in a jizo ceremony and private memorial service that helped her let go and integrate painful experiences from her past. “Creativity, ceremony, and community were powerful parts of my healing. There was a lot that got digested during this time. I had a lot of emotional processing—I processed a lot of grief.”

By the end of the summer, Lea still didn’t know what she was doing next. She decided to move to City Center for the fall practice period. Shortly after moving in, she learned about the counseling psychology program at CIIS (California Institute of Integral Studies). The program description was deeply compelling, and she knew right away this was what she was going to do.

“That summer at Tassajara helped me digest a lot of loose ends and losses that hadn’t been grieved. By the time I heard about the graduate program, I was much more clear about what felt right for me. There wasn’t as much static in my mind.”

Early on in her experience of Zen, Lea had a particular idea of what practice should look like if you were a “real” practitioner. Because her time at Tassajara was so powerful—particularly in terms of ceremony—she thought this meant that she should become a priest. But her body had another idea.

Lea continued to live at City Center and followed the schedule during her first few weeks of grad school. One morning when she was on her way to ring some bells before zazen, she went up the stairs at the back of the zendo, and passed out. She was exhausted. The hopeful idea she had of residential Zen practice and going to school wasn’t working, and shortly after she moved out of City Center.

Lea continued to practice and stayed in touch with her teacher. Eventually, she requested permission to start sewing her okesa so that she could ordain as a priest. Weeks went by, though, and she kept not sewing it. One day, she had a dream: There was a big boulder in a location at Tassajara. As she looked at the boulder, it started to move and change into a massive 40-foot tall woman with long hair. The figure stood up and screamed at the sky “NO!” It was very evocative, and Lea understood: “Ordination isn’t for me.”

Still, Lea had a few remnants of the belief that she needed to become a priest in order to be a “real” Zen practitioner. She spoke about this to a friend who is a Zen priest, “Sometimes I feel like I want to do it, so I’m like a member of the club.”

The priest friend responded: “What if you do it, and you still don’t feel like a member of the club?”

This helped her feel more clear that priesthood was not her path.

Today, Lea has a private therapy practice and also teaches about self-compassion. Navigating uncertainty and tapping into the power of creativity are unique parts of her teaching. She sees not-knowing as essential to having a compassionate relationship with oneself.

Zazen is the foundation for Lea’s understanding of self-compassion. It was through sitting every day, regardless of how she felt or what else was going on, that she came to an embodied understanding that it’s possible to show up for yourself no matter what. Her sitting practice also helped her to see self-criticism as a distorted form of knowing—a knowing of something that is not real.

For Lea, Zen informs self-compassion. Yet, from her experience, Zen doesn’t include a lot about the relational aspects of navigating life. Though Zen helped her cultivate self-compassion, she knows that this is not necessarily the same experience others have. “We can sit, we can look at the wall, and all kinds of things can be going on internally that we may not have the tools to work with. I feel profoundly grateful for zazen and all that it has given me and continues to give me. And I also have found that some people need more than just sitting. Teaching about self-compassion has given me a way to help others who need those tools.”

At the end of our interview, Lea spoke about how important it was to land in herself and what is true for her:

“This is the heart of what Zen has given me: something inside won’t let me contort in the old ways anymore. That’s what has woken up. I can’t contort like I did before. This is me. What I am has to be enough.”

Lea Seigen Shinraku is the founder of The San Francisco Center for Self-Compassion, and her time at San Francisco Zen Center has deeply informed her life and work. While her life doesn’t look the way she once thought it might as a “real” Zen practitioner, Zen taught her how to be who she really is.

Lea received jukai in 2009 and was given the name Seigen Shinraku, which means “Pure Origin, True Freedom.” That same year, she legally changed her given name to include her dharma name.