NOTE: Tape 7, “Lunch Instruction,” given on July 28, 1965, at Sokoji in San Francisco, will not be included in this series, but is available in the Suzuki Roshi Audio Archive, listed on the right side.

To listen to this talk, “Tokusan and the Old Lady,” see the Suzuki Roshi Audio Archive where it is listed on the right side.

This talk was given by Suzuki Roshi at Sokoji in San Francisco on Wednesday, February 19, 1966. 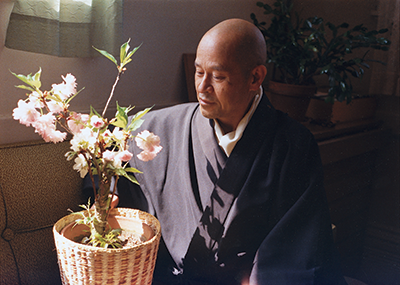 At San Francisco Zen Center, responsibilities get passed on from person to person regularly. One part of traditional Zen training is that a monk should not expect to keep any one role, but to be able to adapt to, and practice wholeheartedly in, whichever position is offered. At times this has disadvantages: while the extant SF Zen Center recordings from 1965 are all carefully dated and annotated, once we move into 1966, it is a different story.

There are seven reels which are listed as being from the one– or two–day sesshins between January and July of that year, but six of them are problematic in some way: dates are not clear or consistent; on four reels, one of the tracks seem to have been completely overlooked and never transcribed or annotated; and in several instances, such as with this one, the audio quality is very poor, with bleed-through of music and radio broadcasts which has made Suzuki Roshi’s voice almost completely inaudible.

With the most up-to-date audio processing painstakingly applied, we can now make out a little of what Suzuki Roshi is saying in this lecture. To get a sense of how it previously sounded, you can listen to this older version.

The date of the talk has been recorded as January 22, the day after two other lectures were offered, but the discovery of unmarked and unknown audio on the same reel, from the February sesshin, throws this date into doubt. In the latter talk (which is also marred by sound interference, but at least nominally has the correct date supplied by the tape operator), Suzuki Roshi mentions the story of “Tokusan and the Old Lady” (which comes from Mumon’s comment on Case 28 of the Mumonkan). In this current talk, he says he talked about that story “this morning,” and discusses it further. Interestingly, this is not a story he appears to have used in any other lecture that we have transcribed, so these two talks have a unique value for that alone.

In this talk, he refers to Dogen’s commentary on the story in ways which—with the limitations on the audio—are not abundantly clear. Dogen referred to the story in the two versions of the “Ungraspable Mind” fascicle in the Shobogenzo and, typically, had his own ideas on what each of the protagonists could or should have said to each other, which Suzuki Roshi tries at length to communicate.

There are two parts to this story that would make it relevant to his students: one is that a supposedly renowned Zen scholar, as Tokusan was, can be outsmarted by a lay practitioner—in this case, an old woman selling refreshments, one of a small number of women who make an appearance in the traditional Zen literature. This is entirely in line with many of the talks Suzuki Roshi had been giving over the previous months which emphasize practice over philosophical or other intellectual kinds of understanding.

Also, Suzuki Roshi amplifies Dogen’s point that while the story about the exchange of cakes for the teaching of the Dharma happens on the relative level, there is an absolute level where no exchange is possible or necessary. For those students following the thread of Suzuki Roshi’s teaching, and as he speaks about during this talk as well, this absolute level is experienced and embodied for practitioners in the zendo, and the practice is to take that experience and carry what is learned in the zendo out to the relative levels encountered in the rest of our lives—a topic that has lost none of its relevance.

“Actually we have completed our sesshin. What we completed will be — will become more meaningful if you continue — if you extend this practice for tomorrow. In this way we extend our practice from today to tomorrow, and from sitting practice to everyday life. This is itself our way of practice.” (3:08)