December 1, 2021
Starting and Growing a Sangha During the Pandemic
Features | Zen Practice

In the spring of 2020, San Francisco Zen Center resident and priest Hakusho Ostlund and his wife Marie Py decided to step out into the wider world. Hakusho had held several positions at SFZC during his 14 years of residency, including tanto (head of practice) at Tassajara, and had begun taking online classes at the Institute of Buddhist Studies in Berkeley.

When Marie was hired for a job in Brattleboro, VT, she and Hakusho left Tassajara and moved there. After years of community living, Hakusho found it challenging to live in a town where he didn’t know anyone and with only one person. He wanted to practice with a local Zen group as a way of settling into the community. There had been a Zen group in Brattleboro prior to the pandemic but it was no longer meeting.

At first, he thought he would wait and start a Zen group post-pandemic. In an email exchange Zoketsu Norman Fischer said, “Maybe you should start your local Zen center now, not wait until Covid is over.” So Hakusho decided to take the first step.

He began by creating the Brattleboro Zen Center website, making flyers and posting them at the Brattleboro food co-op, bookstore, and library, and creating a mailing list. Within a few days people contacted him. A woman he met at the Food Co-op, who practiced insight meditation, knew others and helped spread the word. Hakusho started online, offering zazen five mornings a week. He added a weekly dharma event with discussion, some talks, and a half-day sitting one Saturday a month. “It’s been encouraging to offer what nourishes me in my practice, and find that people respond.” Currently the group is renting a space that will allow them to meet in person at the beginning of 2022.

Hakusho appreciates Zen forms and ceremonies and refers to himself as “a high church guy.” He is wondering how to transmit the forms in a way that is appropriate for his new sangha. He asks himself, when they meet in person would it be best to start more formally or to begin simply and add? As it will be tricky in the new space to face the wall for zazen, he wonders whether the practitioners should be required to do so.

Starting on Zoom meant that expenses were minimal, especially as he had no rent and had a free forty-minute Zoom license. However, more is involved in getting established in a physical space: teaching the forms; purchasing altar supplies, a statue, and instruments; beginning to fundraise to cover other expenses (and hopefully a modest stipend for himself at some point). Hakusho is also setting up a board and working on by-laws and a mission statement. To balance the additional time these activities take, Hakusho notes, “It’s so much fun and energizes my practice.”

Five years earlier, during his Branching Streams Fellowship at Ancient Dragon Zen Gate in Chicago, Hakusho learned about what it takes for a smaller sangha to thrive. He made connections with Taigen Leighton, the guiding teacher, and with Eishun Nancy Easton, a senior student who had been on the ADZG board for many years. Eishun has advised Hakusho on how to establish his board. He has also begun networking with other Branching Streams Zen teachers and with Zen teachers from other lineages in New Hampshire and Vermont. 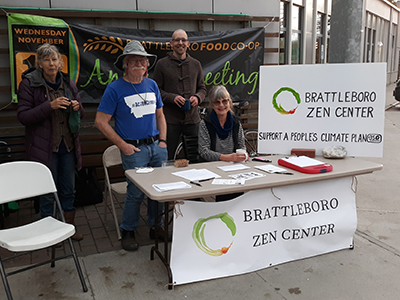 Hakusho envisions the sangha he is establishing as a force for good in the world. Several sangha members, concerned about the climate crisis, meet weekly to explore options for addressing this urgent issue. They began by gathering signatures on postcards as part of a Just Transition climate action sponsored by 350 VT, calling on the Vermont Climate Council and legislators to bring about a transition from fossil fuels to a just and climate-resilient Vermont. “It is the first step in an exploration of how we as a Sangha may bring the ethics, concentration, and wisdom of our tradition into concrete beneficial action in the world.”

There are two aspects of Zen practice that Hakusho finds particularly meaningful. “One is ritual, how we pay homage to the Zen ancestors and engage in a practice of gratitude and humility through forms and ceremonies. The other is sangha, the recognition that awakening takes place in relationship. While the former grounds our practice in tradition, the latter asks us to be flexible and kind as we adapt to one another and the world we live in. My aspiration is to establish the Brattleboro Zen Center at the intersection of tradition and community.”