To listen to this talk, “Forgotten the Value of Religion,” see the Suzuki Roshi Audio Archive where it is listed on the right.

The oldest recordings of Shunryu Suzuki Roshi made at Sokoji, the home of the San Francisco Zen Center at the time, come from a week-long sesshin that took place at the end of July 1965—this is just a few weeks after recordings were started at the Los Altos group. According to David Chadwick, a disciple of Suzuki Roshi, and his biographer, who has worked tirelessly over the last few decades to preserve his teacher’s legacy, Marian Derby (later Marian Mountain, who wrote The Zen Environment), in whose home the Los Altos sittings and talks were held, “got Suzuki to let her record his lectures with the idea of making a book. That’s how taping his lectures got started. Up to that point that was thought to be a sort of sacrilege because they were for the moment and all.” (From Cuke.com.)

The last ten minutes of this talk have long been available in audio and transcript form; it is not clear why the rest of the lecture was not included. Suzuki Roshi spends much of the talk, as he had spent the two talks the day before [“Religious Problems Concerning Such As Psychology Or LSD” and “Why We Should Practice Zazen”*], reflecting on religion and philosophy, as a response to issues that were coming up for the practitioners at Sokoji, and questions he was being asked. He encourages his listeners not to try to simply place their Zen practice within the framework of Western thinking about philosophy or religion. As was noted in a Wind Bell magazine of the time: 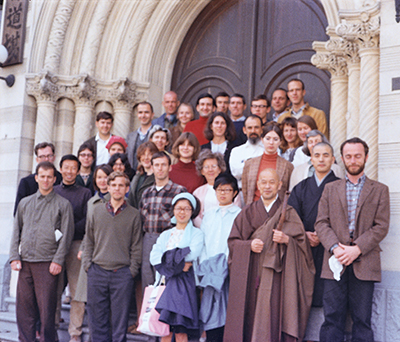 Shunryu Suzuki Roshi in front of Sokoji in San Francisco, with several of the early Western practitioners, c. 1965

“This year, Reverend Suzuki’s lectures (given twice daily Monday through Friday) centered on the problems arising from confusing religion with science (in particular psychology), and with philosophy (especially ethics). Zen is not inimical to science, and it has its own philosophy, but it cannot be equated with either. Reverend Suzuki felt that a clarification of the difference was particularly important in view of the many questions recently raised with respect to LSD, and because of the common tendency in the West to think of religion in moralistic or ethical terms.” (WB 65-05 p2)

He reveals the breadth of his own philosophical studies by referencing some lesser known thinkers (F.S.C. Northrop and Wilhelm Windelband) as well as Heidegger and existentialism—which he claims not to know too much about (Suzuki Roshi graduated from Komazawa University, the traditional seminary educational establishment for Soto monks). These reflections were in service of reminding his students that starting from an intellectual standpoint will not help you practice, an important point to remind students who were embarking on a week of intensive sitting.

“Zazen practice is not the kind of practice you can compare with your everyday activity. This is quite different practice from your everyday activity. We say value — no value in our practice. No material value or physical value or mental value. It is beyond our worldly value. And it is the source of all our activities, the source of all our culture.” (@30:14)

Paraphrasing the koan about Zuigan (Mumonkan case 12; at link, go to page 11), he talks about “the boss”—the inmost self and inmost nature—as he had the week before in Los Altos [“Wisdom Seeks For Wisdom”], and in the two talks [see above*] he had given on the previous day:

In our conventional frameworks, we cannot approach this inmost self, but it guides and orients our practice, and we can start to experience it during our zazen practice. This is what Suzuki Roshi is reminding his students, and us, to do.