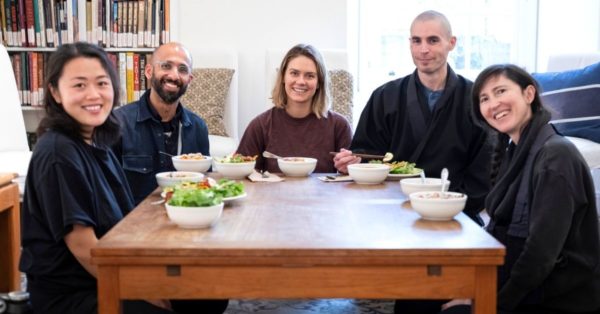 As SFZC slowly reopens to the wider public, becoming a guest student is one way to experience Living the Temple Life, as these three students recently did at City Center. If you are inspired by their experiences, you may want to consider one of our many Guest Student and Apprenticeship opportunities at Green Gulch Farm, City Center, and Tassajara (summer months). Stays can be as short as 5 days; longer commitments are also possible.

During the Covid-19 Pandemic, three members of Young Urban Zen (or YUZ, a SFZC affinity group), Anshul Pundir, Bertha Hu, and JoJo Marshall were living alone and working from home at stressful jobs requiring many hours of screen time. They had been actively engaged in Young Urban Zen’s weekly meetings at City Center prior to the pandemic and had attended online for over a year.

Anshul and JoJo had also participated in a smaller YUZ sangha led by Mei Elliott, the YUZ coordinator at the time, which met on Saturdays for ten weeks in 2019. JoJo said that when Mei gave the group a tour of the 300 Page Street building, which included playing some of the temple instruments, she became interested in residential practice. She enjoyed two two-week guest student stays in 2019, and was hoping to participate as a guest student at Tassajara last summer but was unable to do so because of the pandemic protocols limiting visits there.

This summer, when longer Guest Student stays at City Center became viable, Bertha committed to a three-month stay and was joined by Anshul and JoJo, who came for two weeks in October.

Bertha took a leave of absence from her product management role at a gaming company because she wanted to engage in more dedicated practice. Living in community is and is not what she thought it would be.

She loves the space of the 300 Page Street building, the kindness of people, and learning together. Studying with others supports her practice. However, it’s not all easy. Sometimes she wants to be in community and sometimes she doesn’t. “Everywhere I go, there are joys and tribulations that follow me.” Bertha has been working in the kitchen. “After my first week in the kitchen my muscles were sore. It takes time to adjust. I wanted to make more Asian food, and was supported to make moon cakes and Chinese noodles. Food is how I understand my culture. I’m exploring being Asian American.”

Anshul came to the Guest Student stay looking for some calm. He found that although he was staying in one place all week, there was a lot of movement in his mind. “I felt torn between being social, talking and laughing, and being quiet. It’s hard to find a balance between my expectations and reality. At times I’m open to going with the flow; at other times I want silence. During the work week there was no time to create a space for my mental care until Friday. I relaxed during the weekend.” Anshul worked in the kitchen during his two weeks at City Center. “It was valuable to work with people physically around me after nearly two years of being on Zoom calls all day.” He is an engineer in a large tech company.

JoJo noticed that this guest stay was different from her two previous ones, in part because there was a one-day sitting her first day in the temple. “I crammed in all the zazen I missed during the pandemic. I found it difficult to quiet my mind in zazen when my meditation room at home was also my bedroom/office/home gym.”

She loved following the City Center schedule although she found it pretty rigorous. After zazen, service, soji (temple cleaning), and breakfast she would go up to the roof to journal and would then take a quick shower before the morning work meeting. Her work assignment was the general labor crew, which involved a lot of cleaning. Her favorite tasks are sweeping the front stoop and picking up trash around the temple. She loves being outside and the physical nature of the labor, as her work at home involves sitting at her desk all day — and occasionally forgetting meals. She does marketing for Planet Women, a nonprofit she helped start during the pandemic. It supports women-led conservation in Africa, the Amazon, and the US.

After the isolation of the pandemic, “It’s so good to live in this community again. I love all the opportunities to talk with people and hear how they’re doing. I struggle with keeping to functional speech! I run into someone and suddenly I may be in a deep conversation.”

After his Guest Student stay, Anshul joined the fall practice period as a commuter and has been showing up daily for 5:40 am zazen. “I look forward to coming back every day. It is not something I expected to do until Abbot David Zimmerman encouraged me to do it. I felt supported. And, after working in the City Center kitchen for two weeks, when I’m cooking at home, which I’ve been doing a lot more of, I suddenly feel a sense of calm. It’s like my mind chooses a different mode of being with that activity, one of wholehearted presence, of trying to accomplish nothing at all.”

All three noted changes during their time at City Center. Bertha hasn’t left the temple much so far. “When I do leave I see my time here has cultivated a sense of presence. Here, being sensitive and having love for each other is normalized.” JoJo said, “When I go outside, I see colors and hear sounds more vividly.”

Looking ahead, Anshul may return to City Center for a longer stay or participate in the January intensive at Green Gulch Farm. JoJo plans to participate in the City Center winter practice period as a commuter. She would like to go to Tassajara in 2022. Bertha may extend her three-month stay. Living the temple life seems to have been a fruitful experience for all of them.

Forgotten the Value of Religion: Awakening the Archive, Tape 5

"This kind of 'I' is called inmost 'I,' or ultimate 'I.' It cannot be the subject of study, or philosophy, or science, or psychology."

END_OF_DOCUMENT_TOKEN_TO_BE_REPLACED

Study Yourself: Awakening the Archive, Tape 4

"When you forget yourself ... you take the true activity of the big existence. When we realize this, there is no problem whatsoever in this world."

END_OF_DOCUMENT_TOKEN_TO_BE_REPLACED 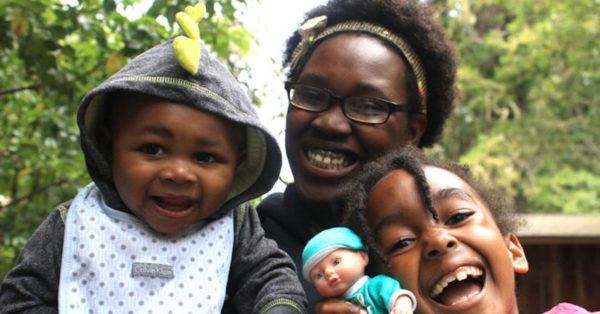 We are not able to invite the Clara House families to the temple this year, but each family will receive a gift bag including a $50 gift certificate.

END_OF_DOCUMENT_TOKEN_TO_BE_REPLACED

"When you try to do something, itself it is enlightenment. It is expression of our true nature."

END_OF_DOCUMENT_TOKEN_TO_BE_REPLACED

The word Qigong combines ‘Qi,’ the vital energy that exists in all living things, and ‘gong,’ the development of skill through work and persistence.

END_OF_DOCUMENT_TOKEN_TO_BE_REPLACED

SFZC and Engage Wisdom are pleased to offer these previously unavailable talks; completion of the project will coincide with SFZC’s 60th anniversary.

END_OF_DOCUMENT_TOKEN_TO_BE_REPLACED

"Even though you read Zen literature you have to keep this beginner’s mind. You have to read it with fresh mind."

END_OF_DOCUMENT_TOKEN_TO_BE_REPLACED

"You don’t do anything, but let our true nature work by itself. This is Zen practice."