During the pandemic, Sally Chang has offered several popular online Qigong workshops. Another one is coming up in January 2022, Eight Silk Brocades Qigong. Each workshop meets for five consecutive mornings to develop a rhythm of practice and a cohort to practice with. “Communal energy and accountability are helpful to sustain practice,” Sally explained. “It’s lively and energizing to train together, and five days is an attainable goal.”

“The word Qigong combines ‘Qi,’ the vital energy that exists in all living things, and ‘gong,’ the development of skill through work and persistence,” says Sally. “There are many styles, forms, and purposes of Qigong. Some are health focused, often overlapping with principles of Traditional Chinese Medicine (TCM). Some are esoteric and focus on spiritual introspection. There are also martial forms of Qigong that include physical conditioning to develop strength, stamina, flexibility, and internal power.”

“Sometimes, it can be challenging to go from our busy lives to directly meditating on the cushion. For some of us, Qigong as moving meditation might be an easier access point to slow our pace and touch into stillness, while being in motion. Movements are generally slow, so we can refine and tone our posture, alignment, breath, mental focus, and spirit.”

“Students who come casually, to try something new, they will benefit. But when we are motivated by something deeper, like a desire to disrupt a pattern in life that has become untenable—that’s when the practice starts to get very interesting. Every form is like an etude teaching the student something specific. Once your body has changed by metabolizing the curriculum of the particular form, there is no need to be dogmatic. It becomes an integral part of you and how you move about in the world. The deeper the practice, the more profound the result.”

“We communicate with our bodies—our breathing, posture, gaze, pace, facial expressions are already communicating before we open our mouths with a single word. How do we respond to stimuli in a way that doesn’t throw us off our center? There’s a liveliness to it. We can observe this both externally and internally—recognizing our own patterns and behaviors, identifying what we want to change, and then we can clear pathways returning to our authentic essence.”

Sally is the founder of Evergreen Taiji Academy and brings thirty years of martial arts training as well as two decades of experience as an acupuncturist and Daoist disciple. Sally is a 26th generation lineage holder in the Wudang Longmen (Dragon Gate) school of Daoism. Wudang Mountain is considered the birthplace of internal cultivation arts such as Taiji and Qigong.

“While many Qigong forms are practiced solo, Taiji is a bridge between the internal and the external. Taiji is both moving meditation and effective martial arts simultaneously, at every moment. In Qigong, we have forms and methods to study ourselves internally. Taiji, as a martial art, trains us to respond to potentially challenging or confrontational interactions while maintaining our connection to our felt center. It is a skillful way to study ourselves, others, and our relationship with others.” 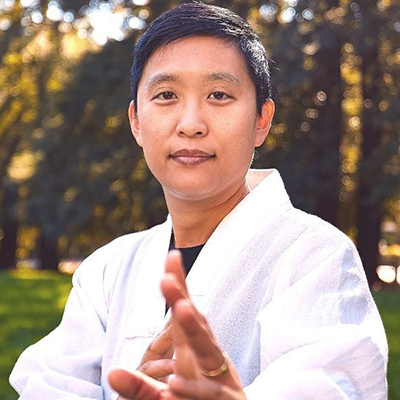 “I felt it was my path from a young age,” she said. “Like so many martial artists, I was inspired by Kung Fu Cinema.” Sally grew up near Washington, D.C. in a white, working class neighborhood where she rarely encountered people who looked like her Taiwanese-American family. There were very few Asian Americans represented in media, magazines, books, news, TV, film, or inside her school populations. The first book available to her, written in English by an Asian American author, wasn’t until high school.

“So, when Saturday Afternoon Kungfu Cinema came around, it was thrilling and energizing for a six-year-old Taiwanese-American kid. I finally saw people that looked like my family, reflecting our culture back to ourselves; and they were strong, confident, honorable, and forthright. They were inspiring and fun, and I wanted to train in martial arts forever more. Luckily, I found kind and excellent teachers throughout my life. I honestly don’t know how I would have made it without them. Their fierce kindness and the practice itself have seen me through my most difficult times.”

How are these traditions relevant in today’s modern culture? “Well, there seems to be a sustained interest in calming ourselves, knowing ourselves better, finding meaning in our lives, being more peaceful in relationships, and touching into our essential nature. I believe the spiritual journey cannot be done alone; what we can learn on our own is limited. We need each other, we need wise teachers, spiritual friends, and a loving community to mature and be a healthy member of society and nature.”

Sally’s Taiwanese heritage is steeped in Buddhist, Confucian (Kong Fuzi), and Daoist culture. More than just a course of academic study, these have a major influence in how she moves in the world as a martial artist, acupuncturist, teacher, and leader. “As Buddhism and Daoism have migrated to anglophonic Euro-American societies in recent decades, it is critical these new sanghas actively study the deep history and cultural contexts of the peoples from whom these religions, philosophies, and practices originated from. To ignore this aspect not only dishonors and perpetuates unconscious harms from cultural appropriation, it also makes the arts one-dimensional. It denies students of the rich shared humanity, universal themes as well as specific cultural contexts the traditions arose from, and why they remain relevant today.”

“I am incredibly fortunate to have kind and excellent teachers willing to accept me as their student and continue to guide me.” Like so many of us, Sally has not been able to train in-person with her teachers during the pandemic. She believes there is a silver lining to this, that “the student has to take on the practice for themselves, grow up and mature, just as a child must eventually separate from their mother in order to grow. These cultivation arts are more than a single lifetime of learning; aren’t we lucky to be able to practice?”