To listen to this talk, “Wisdom Seeks for Wisdom,” see the Suzuki Roshi Audio Archive where it is listed on the right.

This talk was given by Suzuki Roshi at Los Altos on Thursday, July 22, 1965

Among the tapes previously known to exist in the Zen Center archives, the earliest were from a sesshin held at the end of July 1965, which contain recordings of the afternoon service, and the meal chant, as well as talks by Suzuki Roshi. With the discovery of three reels from the Los Altos recordings that formed the basis of Zen Mind, Beginner’s Mind, we now have a new oldest recording, albeit from just a week or so before the sesshin at Sokoji. 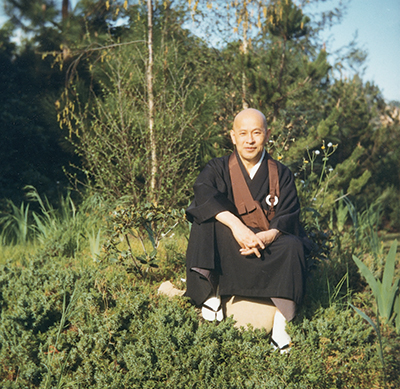 The first thing we notice about this talk is the clear quality of the audio, which has endured for more than 55 years. We can easily picture ourselves sitting next to Suzuki Roshi in the suburban living room where the Los Altos sittings were then being held.

In the two transcripts we have of talks given at Los Altos in the weeks before this, which were both titled (by others) “Prajna Paramita Sutra,” Suzuki Roshi had been referring to the “Heart Sutra” (the English translation of the sutra title), which forms the basis of every morning service held at Zen Center (in those days, it was chanted in Japanese, so the sangha members chanting would most likely not have known the meaning of what they were chanting). There are also observations, which he repeated in the weeks ahead, about finding enlightenment within delusion—not thinking we have to get rid of all our problems in order to reach enlightenment—that echo Dogen’s phrases in the “Genjo Koan.” This important piece by Dogen is a running thread through Suzuki Roshi’s talks of the time, more or less explicitly (you can click on the keyword “genjo koan” on the Engage Wisdom site page for this talk to find other talks that refer to it or its themes).

“When we sit we call it inmost—let inmost nature in its self, or activity—This is—we call self-use of inmost nature—Let it work. You don’t do anything, but let our true nature work by itself. This is Zen practice.” (@6:42)

This sounds like Suzuki Roshi attempting to explain Dogen’s “jijuyu zanmai,” the samadhi of the self fulfilling its function as the self, or as the title given to the talk has it, “wisdom seeks for wisdom”—a phrase that also appears under the title of Zen Mind, Beginner’s Mind, on the page before the Prologue (ZMBM p19). Since we know that most of the group in Los Altos were quite new to Zen practice, we can only imagine how they understood these deep notions. Perhaps they were able, as he would have encouraged them, to put aside intellectual understanding, and just let the practice live through them.

“A flower may come out in spring without fail, but they do not make any effort; they automatically come out—that’s all. We try to open our flower in spring. We try to do the right thing at the right time. We find it very difficult. In this sense we are very stupid. Even though we try to do it, we cannot make it, but this is our human nature.” (@21:30)

This chapter was not one selected for inclusion as a part of the book, and the transcript that was made from the recording did not include eight minutes at the end, of Suzuki Roshi standing up and giving a practical instruction on form and posture to the group. Alongside the deep notions, getting the forms and rituals right was obviously an important element of what he wanted to convey to his students at the time.