To listen to this talk, “Beginner’s Mind,” see the Suzuki Roshi Audio Archive where it is listed on the right.

This talk was given by Suzuki Roshi at Los Altos on Thursday, November 11, 1965.

When this particular, otherwise unremarkable, reel was photographed as part of Engage Wisdom’s archiving process, unlike many other tapes stored at SF Zen Center, there were no complete dates. There were only two pieces of writing on the box, which offered a tantalizing promise: 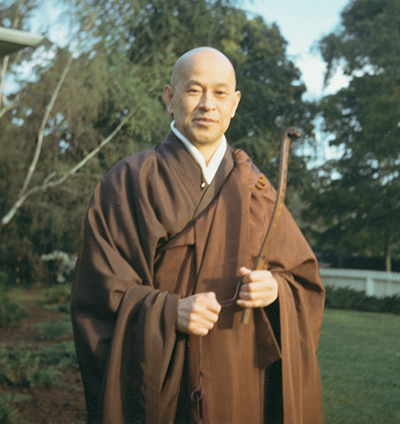 A note from a 1967 edition of SF Zen Center’s magazine Wind Bell states: “Suzuki Roshi lectures and meditates with the Los Altos branch of Zen Center every Thursday morning and evening. The group meets at the beautiful Haiku Zendo which was built in the two car garage of Marion Derby. She collected his Thursday lectures on tape and tentatively entitles them Beginner’s Mind because Suzuki Roshi started by giving them as short lectures for beginners. Marion and Peter Schneider are editing the lectures for publication as a small book which we hope will be ready for the publisher the first of the year.” (WB 67-02, p63)

Now that the phrase, and the title of the book, Zen Mind, Beginner’s Mind is so much a part of the dharma lexicon in the West, it is hard to imagine how it must have sounded to those hearing it for the first time. This talk was taken as the starting point for the book: the notion that keeping a beginner’s mind in Zen practice was the most important point to transmit. It was not, though, the first time Suzuki Roshi had mentioned the phrase: when you read several talks from a particular time period, you can notice him returning to a theme, perhaps expanding on it, or trying a different way to explain it. About a month before this talk was given, he uses the phrase “beginner’s mind”, and Dogen’s use of it, in a talk given during a one-day sitting at Sokoji.

“Even though you read Zen literature you have to keep this beginner’s mind. You have to read it with fresh mind. We shouldn’t say, ‘I know what is Zen’ or ‘I have attained enlightenment.’ We should be always big enough. This is very important. And we should be very very careful about this point.” (@12:50)

Suzuki Roshi, as he does in many other talks, also mentions Eihei Dogen, the founder of the Soto Zen school in Japan, as emphasizing this idea. A large part of Suzuki Roshi’s gift was how he managed to expound Dogen’s often deeply complex writings for a group of Westerners who had very little context for understanding them.

As Richard Baker, Suzuki Roshi’s successor as Abbot of Zen Center, observed in his introduction to Zen Mind, Beginner’s Mind, “he found that Americans have a beginner’s mind, that they have few preconceptions about Zen, are quite open about it, and confidently believe it can change their lives.” (ZMBM p17)

It is often proposed that the Japanese Zen teachers who came to the West during the 20th century were the renegades, the ones who found the traditions of formal Japanese Zen too restricted for the essence of the teachings as they understood it. In the West they found the receptivity they were looking for in students. Suzuki Roshi praises the feeling in the Los Altos group, even though—and also because—they are beginners.

In the talk, Suzuki Roshi cautions “the most difficult thing is to keep our beginner’s mind in our practice” and that being able to do so is the “secret of Zen practice.” He also adds that being able to do so enables us to keep the precepts—emphasizing the moral dimension of practice which sometimes gets sidelined when the focus is just on mindfulness and meditation.

“In beginner’s mind we have many possibilities, but in expert mind there is not much possibility.” (@6:03)

When we read the transcript, and listen to Suzuki Roshi’s words as he gave them, we can appreciate the editing work that went into transforming these short talks into a book. The phrase is re-written, and its place in the talk is changed, but we can still enjoy both the spontaneous expression and the deeper meaning conveyed clearly in the published version.