Note: This is the second in a two part series on families at Tassajara. Part one is available here.

Krista de Castella and Robyn Morris have been sharing the role of Ino (head of the meditation hall) at Tassajara since April 2021. In this article, they share the experience of raising their seven-month-old son Milo at Tassajara.

“We’ve always had an intention or hope to start a family at Tassajara,” said Robyn. “As challenging as it can be, we felt like it’d be a wonderful place to slow down and be really present both through pregnancy and for the transition into parenthood. Being here in community supports us to continue sitting and also offers a large support network for Milo.”

When Robyn and Krista were asked to share the Ino position, they were at first a bit intimidated and thought the demands of the role might be too great while also caring for Milo. The Ino needs to be in the zendo at 4:05 am and their day ends with the chanting of the refuges at 9 pm. However, they found that sharing the Ino job makes it possible.

Krista said, “It supports us staying fresh in both roles—when one of us starts to get worn out with work or childcare, we can tag the other out. We have a pretty even split of our time in both roles and also a renewed appreciation for both activities—it’s so wonderful to sit in silence when you’re a parent and to be engaged in work with the community when you’ve been with a baby all day. Spending time with Milo is wonderful—and spending all your time with a baby can be exhausting! Having it split between us feels like it offers the best of both worlds.”

Both are grateful to SF Zen Center for letting them share the Ino position. Robyn noted, “The default expectation typically is that the mother stays with the baby as she can breastfeed, but we always knew that we wanted a more even way of sharing the responsibilities of work and parenting.” They had conversations with many other past and present SFZC teachers and parents and learned about ways people have done this in the past.

Krista and Robyn received priest ordination on September 11, 2021. “We met with the current abbots of SFZC and several senior dharma teachers early on to discuss our intention to ordain and start a family. It’s unusual and somewhat unconventional to be engaged in monastic training with a baby, but fortunately many SFZC teachers are also parents and understand that the challenges of parenting are not outside our vows and commitment to practice as priests – our practice is to completely meet all of our life as it unfolds. Parenting provides many rich opportunities for practice.” 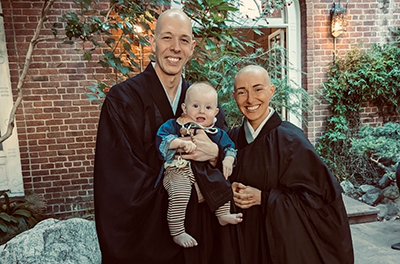 Robyn noted, “It’s difficult to build on a shaky foundation. For us, even though being parents was an unknown territory, next April will be our twentieth anniversary. The stability of our relationship gave us confidence we could support a little one and ordain.”

It was difficult at first when they returned to Tassajara two months after Milo’s birth. “Because of Covid and social distancing, we were all more isolated, but now as things are opening up, we’re really appreciating being in community—Milo gets a lot of love and attention from the sangha. I think he smiles so much because everyone is always smiling at him!” Krista said.

Robyn spoke about what he’s learning as a new parent: “I didn’t expect parenthood to be such a rich ground of training. I see how selfish I can be. With Milo, there are times when I can’t put myself first; it’s sometimes a practice of renunciation.” Krista added “I used to think ‘parental mind’ was a mind of sacrifice, and now I see that it is also ‘joyful mind.’ It’s joyful caring for Milo even when I’m exhausted; there’s something buoyant in it. It’s the most natural thing.”

Robyn added, “I think about how difficult this would be if I were doing it on my own. It’s helpful for our practice to have some difficulty, but if the waves are too big, you drown. I’m grateful to be doing this with Krista. We traded some things we used to enjoy doing for being with a cute little person.” 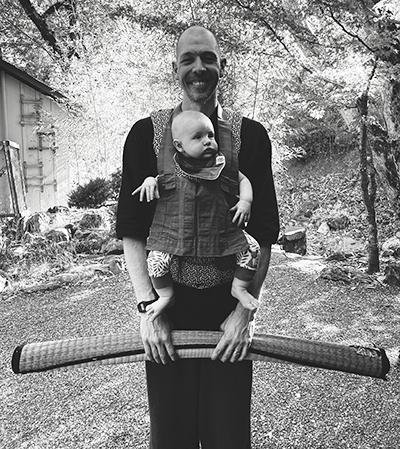 Krista noted some challenges thus far. Milo stopped breastfeeding at two months. “I think we tried just about everything to encourage him to breastfeed but it was just too hard for him. We really wanted to keep him on breastmilk so I’ve been exclusively pumping for the last five months now.”

“I had to grieve the loss of our breastfeeding relationship—it’s such a sweet thing to be able to do, and as a new parent it really shook my confidence. I think a lot of women go through these challenges and it’s hard to talk about because of all the expectations we have of mothers. At some point, though, I saw how much added suffering I was creating for myself with my thinking around this. I realized that it actually had very little bearing on my ability to be a good mother for Milo and it doesn’t feel like such a big deal now.”

Part of the Ino’s role is to create a container that supports everyone’s practice. “We don’t know what that will be like during the practice period. There are times when it’s a joy to have a baby around and there are times when silence is best.” As parents and newly ordained priests, Krista and Robyn share the complexities of spiritual practice that includes both family and monastic expectations. And the sangha at Tassajara is privileged to enjoy supporting them and being supported by them. 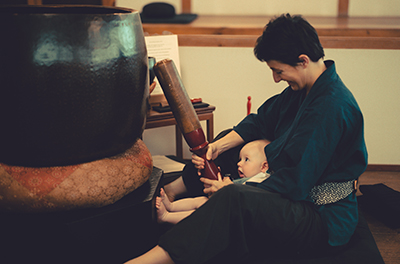 Milo and Krista in the Tassajara zendo 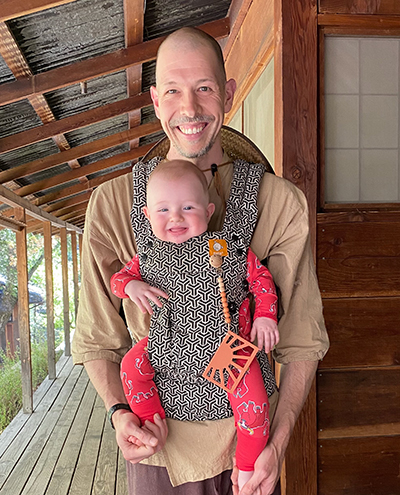 Robyn and Milo on the engawa at Tassajara

END_OF_DOCUMENT_TOKEN_TO_BE_REPLACED

Forgotten the Value of Religion: Awakening the Archive, Tape 5

"This kind of 'I' is called inmost 'I,' or ultimate 'I.' It cannot be the subject of study, or philosophy, or science, or psychology."