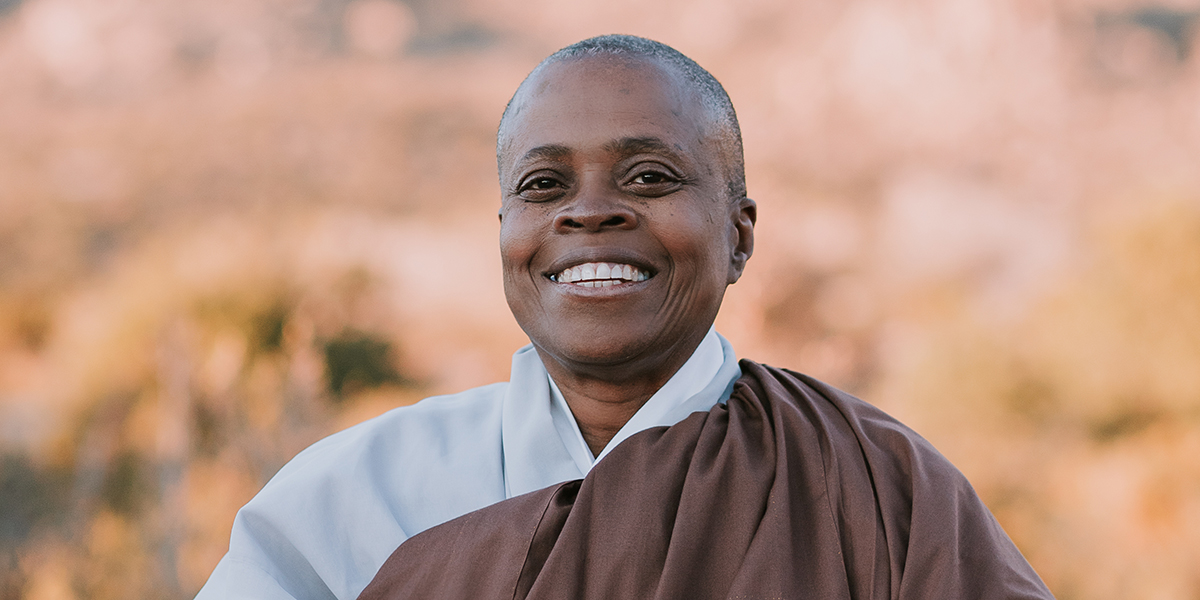 Zenju Earthlyn Manuel is a poet, although to Sangha News readers she may be better known as a Dharma-transmitted Zen teacher and author of several books inspired by her Zen practice. She will be co-leading a poetry workshop on Saturday, September 11, with Ross Gay, “How to Skim the Cream.”

In our interview, Zenju spoke about her lifelong connection with poetry and how she came to see herself as a writer.

Zenju, known as Earthlyn prior to receiving her Dharma name, started writing as an eight-year-old because she felt speechless. Her family had moved to a new neighborhood in Los Angeles and she was attending her first all-white school. Writing helped her navigate the experience. She didn’t think of herself as a writer then. She wrote poems on paper bags, envelopes, anything she could find, and saved the papers in large boxes. She did this from elementary to high school. As an adult, when she was getting ready to move to the San Francisco Bay Area, she discarded the boxes and their contents, in an effort to reduce her load. She later regretted it.

Although high school teachers praised her poetry, and were happy about a poem that was published in a chapbook of the school’s English Literature department, Zenju wasn’t interested in being published and didn’t hold onto her copy of the chapbook. She wrote some essays in high school, though for her it was “poetry, poetry, poetry all the way.”

Zenju attended a college preparatory high school and majored in English literature. She read the classics—Chaucer, Shakespeare, Yeats, Keats, Emily Dickinson, and added on her own Phyllis Wheatley, Nikki Giovanni, and Langston Hughes. Although she started out studying English literature in college, when she saw the reading list she realized she had already studied the texts in high school and wasn’t interested in repeating them. She took classes in Sociology and Psychology but later graduated with a major in Pan-African studies. After being offered full scholarships from major universities in the country to attend graduate school, she chose to stay in her hometown and attend UCLA.

Zenju’s father, born in 1898 in a sharecropper’s family, was illiterate, and her mother, born in 1910, had only completed sixth grade, but later graduated high school at the age of 65. Both parents, having migrated from rural Louisiana, made sure that their three daughters received a good education. It was the path to success for many Black people whose families were farm-workers or servants, with limited access to formal education.

At one point as she was growing up, Zenju shared with her mother that she was reading Richard Wright’s novel Native Son. She was surprised and profoundly moved to learn that her mother had read the book and realized she had lived in the time Wright was writing about.

In her twenties Zenju was writing short stories and she submitted one to a journal edited by Pearl Cleage, an African-American playwright, essayist, novelist, and poet she admired. Her story was published and she received a check for $100, the first time she earned money as a writer and realized her work might be of interest to others in the world.

In her early thirties Zenju realized that she enjoyed writing and she continued writing for many journals and magazines around healing, transformation, and African and women’s spirituality. Her first experience of wide visibility came with the publication of her Black Angel Oracle Cards by Harper Collins in 1999. She received a large financial advance for her work, and after the cards were published she received mail from Black women in the U.S., Canada, Great Britain, and the Caribbean. Zenju was afraid and naïve at the time and overwhelmed by the attention she and the cards received.

Zenju came to  San Francisco Zen Center to get out of the limelight and to continue walking the path of Dharma. She had previously spent fifteen years in the Nichiren tradition and held lay membership in the Soka Gakkai. On the Zen path she wanted to sit in silence and not be pulled by notoriety in the world. Fortunately, she had the chance to spend time at Tassajara with a POC group led by Ryumon Gutierrez-Baldoquin and soon after decided to deepen her practice in Zen. Ryumon suggested that she attend a three-week intensive at City Center, led by Teah Strozer and co-led by the late Zenkei Blanche Hartman and Ryumon. During that intensive Zenju noticed a deep transformation but she wasn’t sure how it happened.

As part of  the intensive, participants were asked to write about how they suffer. Zenju wrote a poem, “See the Butterfly” (in her book Tell Me Something About Buddhism, and shared it with the group. Blanche was excited by the poem and reached out to Zenju. Blanche later became Zenju’s teacher. Shortly before Blanche died, in 2016, Zenju compiled and edited Seeds for a Boundless Life, a collection of Blanche’s teachings.

Poetry was another gateway to Zen for Zenju. She was introduced to haiku in high school and studied ancient Zen poets such as Basho and Ikkyu. She sees an affinity between the work of the ancient Zen poets and Black Harlem Renaissance artists such as Langston Hughes, Faith Ringgold, Zora Neale Hurston, Jean Toomer, and the painter Romare Bearden—both traditions share an awareness of suffering, life, the earth, and what’s immediately in front of us. Many of the Harlem Renaissance artists studied Eastern philosophy, including Buddhism.

“Everything I write is poetry,” Zenju said. Her most recent book, The Deepest Peace, is her favorite. She describes The Deepest Peace as an experience: “I want people to read it and experience peace rather than me describing it.” She crafted the words carefully. “To write one page took a long time because I had to write it from a place that would turn readers away from analyzing or seeking knowledge. I wanted the words to come from the same place zazen brings us into, a well of nothingness. I can’t teach it or tell anybody about it. I prefer to teach with and through poetry.”

Zenju has two books coming out in 2022, The Shamanic Bones of Zen, to be published by Shambhala in February, and a magical and historical novel situated in 1915 Haiti, The Waters of Lespwa, to be published by Aunt Lute, a Bay Area feminist press. She is currently working on a book for Sounds True, with the tentative title Opening to Darkness, due out in 2023.

“Writing is how I live,” says Zenju. “It’s my life. It’s how I share my discoveries. The work comes through me and I share it.”