Many residents of SFZC’s City Center go up to the roof to get a view of the city, find a quiet place to read, or to work out on the stationary bike. On the roof there are several beehives and a protected area with Suzuki Roshi’s orchids.

These orchids were originally tended by Shunryu Suzuki, who lived at 300 Page Street from 1967, when San Francisco Zen Center acquired the building, until his death in 1971. We don’t know how many orchids there were initially, or how many times they have been divided and repotted over the last five decades but they have lived on the City Center roof all these years. They have been watered twice a month by a succession of Zen student gardeners, and have absorbed nourishment from the water and the moist air.

When Bran Massey, the current gardener, began working in that role over a year ago, he noticed that the orchids were overflowing their pots and didn’t seem to be thriving. He knew about many other plants, but with orchids he was “starting from scratch.” He consulted with a few staff members who knew about orchids, and learned from the American Orchid Society’s website. He realized that the orchids needed to be repotted, a daunting task, as there were so many. Bran ordered twenty-eight-quart bags of orchid potting soil for the project.

Bran told me that the orchids are Cymbidium, a genus of evergreen flowering plants in the orchid family Orchidaceae. Orchids in this genus are epiphytic; they live on tree branches and take their nourishment from air and water. Epiphytes can also take nutrients from dead plant matter like bark. New potting medium can support the plant up to six months. After that they need orchid food on a regular schedule.

Cymbidium have pseudobulbs with long tapering leaves. The orchids on the roof are dormant now, but when they bloom they have many flowers arranged on a long stem that arises from the base of the bulb.

Bran was joined in the repotting project by Paula Pietranera, a resident who is a skilled gardener. On a chilly afternoon I watched them remove an orchid from its old pot, revealing a densely packed bundle of intertwined roots.

Repotting decades-old orchids can be a messy job. They soaked the plant in a bucket of water in order to make the roots more pliable and began the painstaking process of removing dead roots and bulbs and untangling the roots. This was necessary in order to see where to make the separations when they divided the plant into several smaller ones. The last step was inserting the plants into fresh potting medium in their new pots.

Paula and Bran noted with pleasure that from the two plants they have repotted so far, they now have nine smaller ones. Paula commented, “These orchids have seen a lot of things in the time they have lived on the roof.” 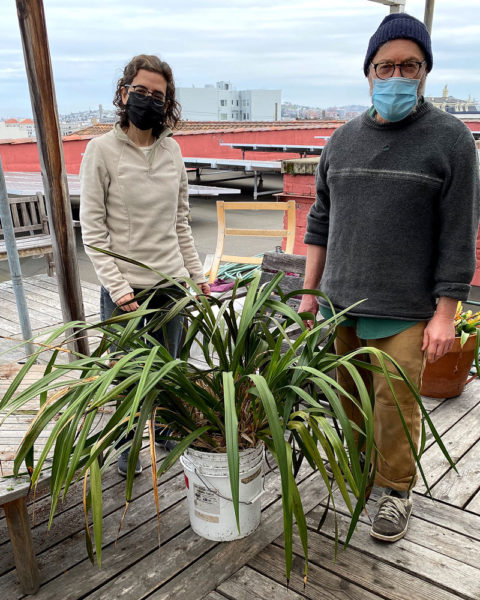 Bran and Paula soaking the orchid 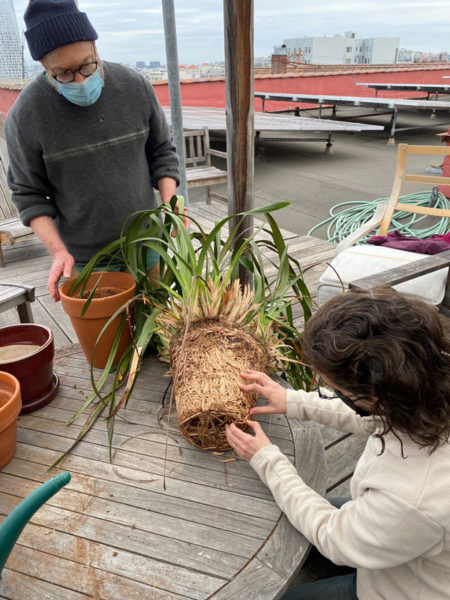 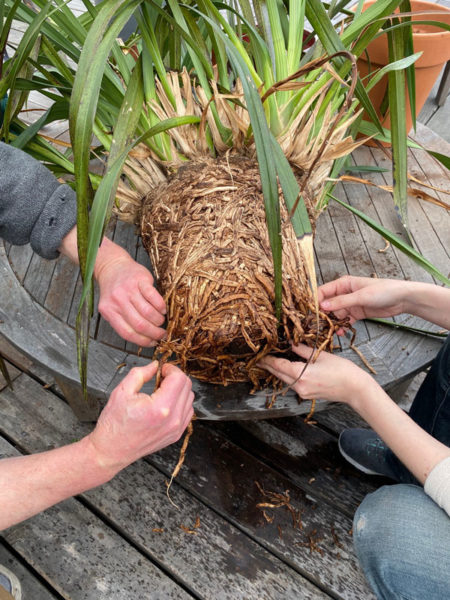