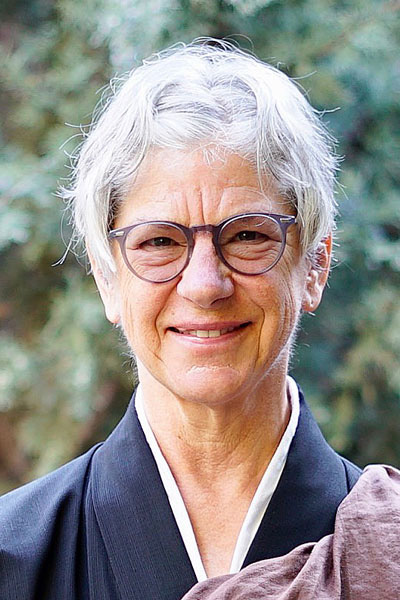 Kathie Fischer and her husband, Zoketsu Norman Fischer, will be co-leading an online intensive Intimate Discussions: On Dogen’s Zuimonki (March 2-20). She spoke with Sangha News about the text, the intensive, and the nature of teaching at a distance.

Sangha News: Thank you for speaking with us, Kathie. To begin, can you say a bit about the text, the Zuimonki? The translation of the term I found was something like “easy to understand.” Is that correct?

Kathie Fischer: I don’t know about the exact translation, but it is a text I’ve loved and studied for a long time, beginning when I was at Tassajara. A Primer of Soto Zen was an early English translation and I’ve gone back to it repeatedly over the years.

SN: Can you say something about the text itself — its history and so on.

KF: It is a collection of informal talks that Dogen gave when he was practicing at Koshoji monastery. It would have been when he was still pretty young, in his 30s. He was very enthusiastic and wanted to embody his vision of practice in a concrete way and to correct some of the things he found off base in the Japanese Buddhism of his time. The Zuimonki is very down to earth, the sort of “nuts and bolts” of practice. This is different from the Shobogenzo in which he is more philosophical and poetic. But he was actually producing both at once — the written work and the oral talks.

SN: Why did you and Norman decide to use this text for the intensive?

KF: We’ve never led an intensive at Zen Center before so we don’t know who will be likely to attend. Dogen is very important for Soto Zen but he can be really challenging; so we thought we’d begin at the beginning with something that both those new to practice and those with more experience could find interesting and useful. Due to online teaching, we are imagining a rich mixture of people from all over.

SN: And what can those who sign up for the intensive expect to find?

KF: I hope that people who are already familiar with Dogen will see a new side of him and that people new to practice will go away thinking “Oh, I can do this too.”

An example is this: I was recently reading one of the talks in the Zuimonki in which Dogen says that if you are speaking rationally to someone and that person disagrees with you, don’t try to convince them with logic or argument. Don’t argue back. Just listen; don’t defend yourself or your point of view. I think that this is fundamentally the way a religious person’s behavior should be and I found it very inspiring.

SN: Is there anything you’d like someone who is considering doing the intensive to know ahead of time?

KF: We want to try to include as much active participation as possible and have been thinking about including a writing component as well. Of course, given the limited time and access we’ll have to each other, we won’t be able to emphasize this as much as we’d like, but we still want to do our best to encourage people to talk to each other and to nurture a sense of community with the participants.

SN: Could you say a bit about the pros and cons of teaching and practicing online?

KF: Well, the obvious downside is that we can’t be physically engaged with each other as we would be in the same room. And of course a lot of people are already on Zoom for hours every day and there is a sort of burnout happening.

But the upside is having so many people connecting who wouldn’t be able to otherwise. If we were doing this in person a lot of those who will be joining us wouldn’t be able to for reasons of money, difficulties with travel, other obligations as parents or caregivers, and so on. This allows people from all over to be part of something. I’ve co-led some on-line practice periods at Upaya Zen Center in New Mexico and we’ve had people from Germany, Guatemala, Canada, Mexico, and all over the US join us.

I’ve also found that there are some really intimate conversations, and a sort of transparency that happens in this face-to-face medium. I was really surprised to discover this.

SN: It sounds like you’re really excited about this.

KF: I am. It’s a big adventure for Norman and me and a great opportunity.

SN: I wish you all best and am sure that those who join you will be very happy they did.