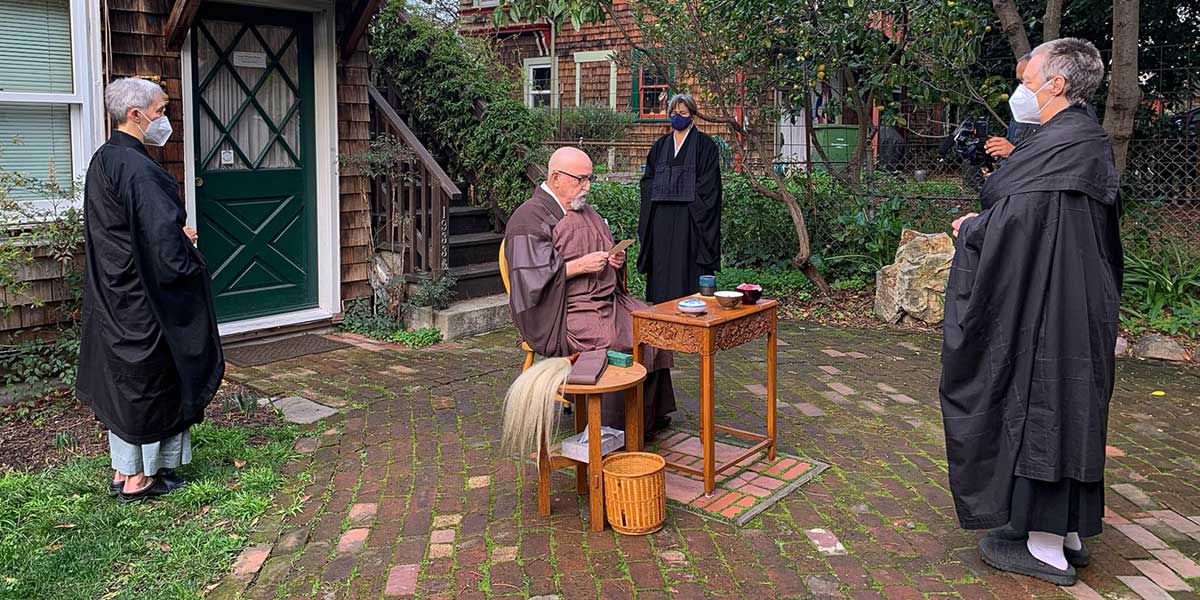 On January 31, 2021 Hozan Alan Senauke became the second Abbot of Old Plum Mountain Zen Center (usually called Berkeley Zen Center). The ceremony was held over Zoom and was attended by over 350 sangha members, Zen teachers, friends, and family from four continents and eight countries. This three-hour event could only have occurred with months of planning and many rehearsals, careful collaboration and coordination, much of it behind the scenes.

A look at the program reveals the complexity of the Mountain Seat Ceremony and the many participants who had ceremonial roles. On the day preceding the ceremony Steve Weintraub, Zen priest and teacher at Green Gulch Farm Zen Center, gave a dharma talk about the meaning of the ceremony and its structure. Steve had been the Ceremony Director — the person who conveys the spirit of the ceremony, keeps track of the ceremonial roles and details, and leads rehearsals — of several prior Mountain Seat Ceremonies at San Francisco Zen Center and Centro Zen l’Arco in Rome.

The Meaning of the Ceremony

The image of ascending the mountain seat can be traced back to China in the seventh to tenth centuries in what has been called “the Golden Age of Zen.” Most monasteries were built atop mountains, and it was arduous to reach them. The sense of this ceremony is that Hozan has come from far away, trekking through the mountains. This is symbolic of Hozan’s inner journey, his maturation over many years of practice.

In the ceremony script, Hozan is referred to as the Shinmei, translated as ‘new order’ or ‘new life;’ Hozan is bringing new life to the position of Abbot and to Berkeley Zen Center. Within this new life is continuity: Hozan’s expression of the way of his teacher, Sojun Roshi, and beyond Sojun Roshi both Shunryu Suzuki Roshi, the founder of San Francisco Zen Center and his son Hoitsu Suzuki Roshi.

In his dharma talk Steve described the core feeling of the ceremony as mutual trust, support, and relationship between the person occupying the Mountain Seat and the sangha (both the BZC sangha and the wider sangha). Rooted in that mutual trust and support, the ceremony represents the harmonious, peaceful transfer of power. 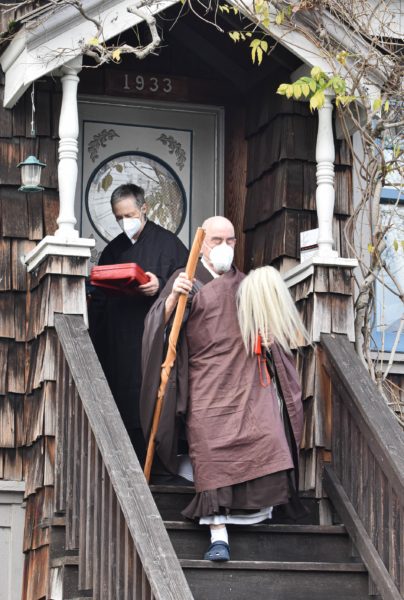 The Online Nature of the Ceremony

Jon Voss, who had been asked to produce the Zoom coverage of the ceremony, commented, “We had a crew of six working on just the Zoom part, with quite a few rehearsals. We used multiple camera views. We had to try several different approaches to audio as well, as participants Zoomed in from literally all over the world! While it may not be an ideal way to gather, I think that having everyone in that virtual space together, along with the sights and sounds and deeply heartfelt contributions, created a truly moving experience for all.” A video of the ceremony will soon be available on the Berkeley Zen Center YouTube channel.

The ceremony had to be modified due to Covid-19, yet all the elements were there. It began with a procession outside the gate of BZC led by Board President Mary Duryee and Zendo Manager Carol Paul, followed by the Shinmei and his attendant, Laurie Senauke. There was a feeling of joy as the procession approached the gate, where the Shinmei offered fragrance and made the first of many statements he had written for the occasion.

The Shinmei then offered fragrance in the Zendo and was shown his new seat by the Zendo manager. In the Buddha Hall the President invited the Shinmei to serve as Abbot. The Shinmei then signed several documents and received the Temple Seal. 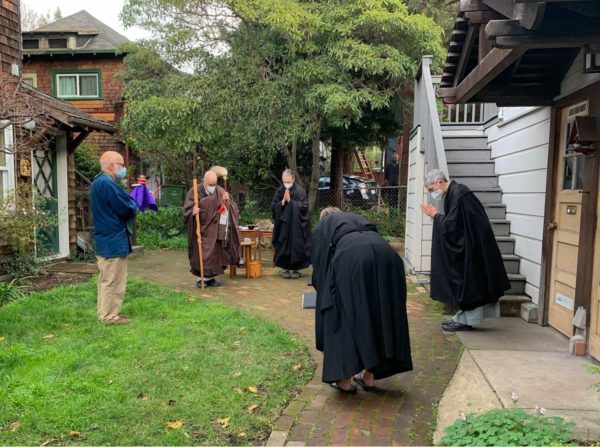 He had been welcomed, and now was ready for the second part of the ceremony, in which he demonstrated his teaching. The Shinmei removed his okesa and received a new one sewn by sangha members. Climbing the Mountain Seat may seem daunting, and three people offered statements of support to encourage the Shinmei: Gengo Akiba Rosha, the Bishop of Sotoshu (Soto Zen School) in North America, Mary Duryee, representing the BZC Sangha, and Joanna Macy, speaking for personal friends of the new Abbot.

Joanna Macy addressed the Shinmei, speaking for “your friends from the Buddhist Peace Fellowship, the International Network of Engaged Buddhists, your friends on death row, dalits in India, the Rohinga in refugee camps — they want you to feel that they are at your back. They find in you a friend who sticks with them through thick and thin, a brother who has political smarts, passion for justice, love of music, love of life” She stressed the critical decade we are in for our planet as the Shinmei steps into being Abbot: “We must become a planet people.”

Encouraged by these statements of support the Shimei climbed the mountain seat (in reality a small platform) to demonstrate his teaching. He offered fragrance and read four statements: for world peace; to all the Ancestors in this teaching lineage; to members, donors, families, and deceased members of this temple; and to his root teacher, Sojun Mel Weitsman. Hoitusu Suzuki Roshi, in the role of Manjushri Bodhisattva, announced the Shinmei’s teaching with traditional words in Japanese: “Dragons and elephants, let us call forth the dharma.” The heart of the teaching was a Question and Answer exchange with eight people the Shinmei had invited.

Several of the questions addressed concerns about the state of the world. Zenju Earthlyn Manuel, teacher of Still Breathing Zen Sangha, asked: “Given the turmoil in the world — I was born into it. When I die, I will leave it. How do you understand the suffering?” Jill Jameson from Melbourne, Australia, said, “Many across Asia can’t face systemic violence. How will you face it from the Mountain Seat?”

The last of the questions was posed by the Shinmei’s son Alex, who was speaking from Sogen-ji temple in Japan, where he has been studying with Abbot Shodo Harada Roshi. Alex appeared in monk’s clothing and with a new dharma name, Genpo (Pure Dharma) which he had received earlier that day when he was lay ordained by Harada Roshi. This appeared to be a surprise to the Shinmei.

Following this question and answer exchange the Shinmei made several statements and expressed his understanding of a Koan. He noted, “Ancestral rivers meet in me, Jewish prophets and Zen masters. I could never have imagined a life like this one; I could never have wished for anything more.” He spoke with appreciation for the training he had received from Sojun Roshi: “Sojun’s spirit of training was rigorous, complete and kind.” 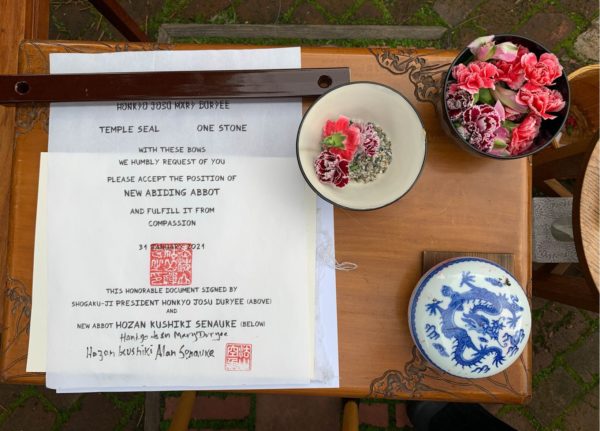 Rinso Ed Sattizan, Central Abbot of San Francisco Zen Center, noted — the deep and unique connection between Berkeley Zen Center and San Francisco Zen Center — almost like siblings. The teachers, and teaching, in both Centers flow from the same source, Suzuki Roshi, his teaching and his Way… “There is a strong bridge in our hearts between our two practice communities.”

He also praised the new Abbot as a bridge builder: “You have skillfully built and continue to maintain a bridge to Sotoshu, our Soto Zen family in Japan. And in your enormous, deep and various work in Social Justice and Social Equity, you have built and continue to maintain a bridge to many peoples and communities here in the United States and around the world. You never hesitate to jump into the ‘muddy water’ to help people, even when it means traveling tens of thousands of miles, to Bangladesh and Burma, to Sri lanka and Thailand, to India, Malaysia, Germany, Rome, Hungary, Japan — you traveled to offer help in whatever way it was needed, like Kuanyin with her 1,000 arms, and to offer Buddhist practices of liberation in all these places.”

The congratulations from Silvie, Alan’s daughter, and Laurie Senauke, Alan’s wife, as well as the surprise of Alex’s lay ordination made it clear that Alan’s love for his family and theirs for him sustains all of them, radiates out to the Berkeley Zen Center sangha, and in wider and wider circles touches lives far and wide.