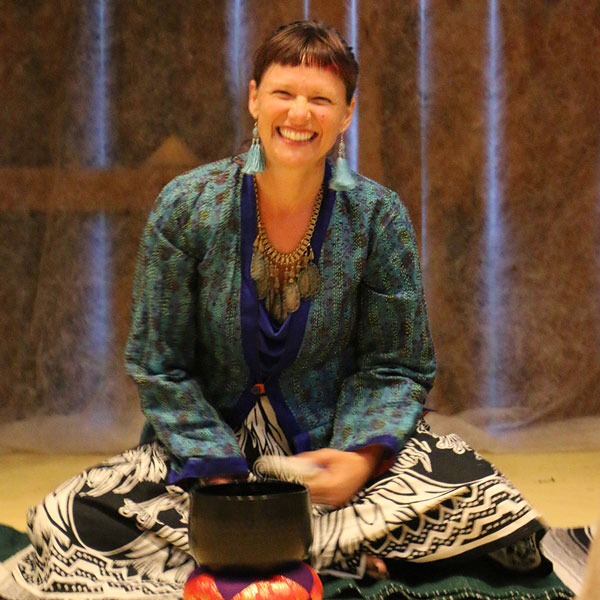 During my first month as a farm apprentice at Green Gulch I had a bad dream. I dreamt that I had gone home for the weekend and that my boyfriend had been with his ex-girlfriend. When I woke up I was really upset.

Later that morning I was sitting at breakfast with some people I didn’t know very well. Someone asked me how I was and I said, “Actually I feel kind of off-kilter, I can’t stop thinking about this bad dream I had last night” All three people at the table were completely available and present. They asked me, “Do you want to talk about it?” So I told them the dream. As I was telling them I was thinking, “Do they really want to hear this?” They were so attentive.

After I told the story, there was a little pause. Then one of them started chanting, “No eyes, no ears, no dream, no boyfriend, no ex-girlfriend” and the other two people joined in on this spontaneous version of the Heart Sutra. I was so touched and felt really met by these people I had not spent much time with. It was a beautiful demonstration of the kind of connection that is cultivated at San Francisco Zen Center. And of course the direct connection with the Heart Sutra.

At the beginning of my apprenticeship I was trained to be chiden (the chiden cares for the altars and ceremonial objects). The person training me said, “You have to get the ash in the incensor completely flat.” I was nervous and wondered: is this really what I’m supposed to be doing? How seriously am I supposed to take this? How important is this?

As I did the chidening over the coming weeks, I found it to be so tender. As I was cleaning or preparing the altars I was imagining Fu [Abbess Furyu Nancy Schroeder] or Reb [Tenshin Reb Anderson] offering incense. In my imagination, they were thinking, “Wow, this incense ash is really flat.” It evolved into a bridge for me from thinking that I’m just a random person who’s here for an apprenticeship to feeling very connected to the service and the teachers I looked up to. I had this feeling that all the puzzle pieces were fitting together into the big picture. Smoothing the ash might seem really insignificant, but somehow it’s a part of the puzzle.

After I had been a farm apprentice, I was once asked to work with the farm crew to decorate the zendo for Thanksgiving. I arrived on time but the farm crew was already there and had quite a bit already set up. They had an exuberant, celebratory energy and I just folded right into it even though I didn’t know the people on the farm crew particularly well at the time. It was so easy for me to tap into that flow of energy.

We brought in everything from pumpkins to irrigation hoses and put them all over the zendo. I had this sense of deep celebration, of abundance and labor and connection to the earth. It made me happy to see the farm tools and the produce and all these different elements piled up all around the altars. By the time we finished, I had tears in my eyes because I felt so open and connected.

Another moment of deep connection was very recent, during my jukai (lay initiation ceremony) in August 2019. I had entered the zendo and was kneeling in front of Fu. I was super nervous. She sat there holding eye contact with me and breathing. In that contact, in the silence of this room full of people, I felt so connected with Fu and so cared for. I received this whole message from her in the silence — I’m here with you, you’re here, and that’s it, there’s nothing more. It was a transcendent experience.