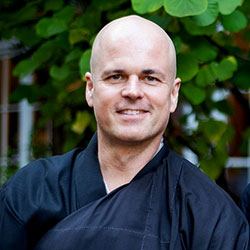 I’m originally from Argentina and I practiced Soto Zen for many years in the Deshimaru lineage there. Back then I already knew about SFZC and had read Suzuki Roshi’s book Zen Mind, Beginner’s Mind. I remember thinking at the time how “far away” San Francisco Zen Center felt. Who would have guessed I would be writing this?

My wife, Paula, and I married in 2013, after having met in the zendo where we practiced together in Buenos Aires. At that time, I had to travel to Mexico City for some business meetings, so we decided to continue our travels to enjoy a honeymoon in California, starting with a visit to San Francisco. I was excited about the opportunity to visit Beginner’s Mind Temple (City Center), so I attended the Saturday morning public program.

My first deep connection happened during morning service, when we chanted the Heart Sutra in English. This was the first time I chanted a sutra in any language in which I could relate to the meaning [since previously I had chanted only in Japanese]. Chanting the sutra in the Buddha Hall, something became very true in my practice.

I came back to City Center every time I had a trip to Mexico City, and stayed for a couple of nights each time. That is how I first got to interact with the residents. As I visited again and again, I had a sense that there was a particular warmth in the sangha that I had never felt before. Now I know this is probably Suzuki Roshi’s warm hand to warm hand transmission, still alive.

In 2014 I did my first Practice Period, working in the kitchen. My connection just kept growing stronger, both to SFZC and to my practice. After a six month trip to Japan in 2015, Paula and I decided to let go of our life in Argentina and move to San Francisco. Six years after my first Practice Period we are here, living at City Center.