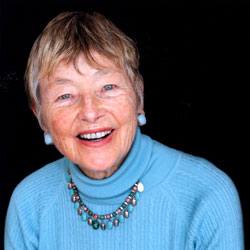 Let me go back to the very beginning before Green Gulch Farm was established. When the Golden Gate National Recreation Area was finalized, George Wheelwright made land available to San Francisco Zen Center. Some of the members of the Zen community were looking over the ranch houses on the property. I visited Green Gulch because I had started an organization called Enterprise for Youth, for high school students, and I was looking for a place in Marin for the students to spend a summer in the country.

I saw these black-robed Zen people, the way they moved, just their way of their being, and I felt an instant connection. This was in the 1970s. I’d been a very loose Episcopalian, not really believing in it. But this seemed to be so nourishing … In 1982 I decided that I would become a member of the San Francisco Zen Center. Spiritually it fit like a glove over my hand and it still does.

I would get up in the morning to meditate half an hour before I went off to work. My husband wasn’t averse to it but he could never spit out the word “meditation” — he would call it “exercises.” As in, “Are you going to do your exercises?” I meditated faithfully in the mornings and evenings. That carried me for many years.

During the times when I was sick or had other difficulties, meditation practice really pulled me through. After a car accident in 2017, I had a couple of operations and one that almost took me away. I started practicing again after I got out of a month’s stay at the hospital. I still practice following my breath before I go to sleep.

What I learned from my practice was love. Before that I didn’t like anybody. It’s fortunate for me to have moments in practice when something felt like it clicked because it’s hard to change oneself. The drive to be open-hearted and vulnerable has a lot to do with my practice.

Sangha News: Could you talk about your connection to Blanche?

Blanche was nearer to my age then any of the others Suzuki Roshi attracted. This was during the Vietnam War and Blanche was already a priest. Â I would go down to Tassajara with Blanche every summer.

I loved her deeply and I had the privilege of taking care of her when she had to go to the rest home. In her late 80s Blanche began to fall down a bit so I provided her with a massage every week.

I saw her get older and she had to be more resigned about her condition, including a heart problem, and I admired every bit of the courage she had. I have a wonderful book that she wrote, Seeds for a Boundless Life. Her journey through life was a good teaching for many of us.