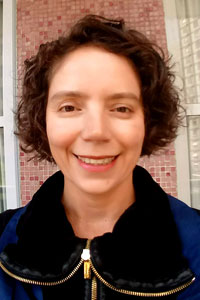 Engetsu Lefevre first came to SFZC’s City Center in 2013. After several years of Zen practice in her native Brazil, she was looking for a Zen center for long-term residential practice in the US.

I took the night bus from LA to San Francisco, and arrived really early in the morning,” Engetsu recalled. “When I walked through the front door at City Center, I left my backpack in the office and went straight into the Buddha Hall to join the morning service. We were chanting the Heart Sutra in Japanese, the Makka Hannya Haramitta Shin Gyo. Many of the sanghas I had already visited in the US didn’t chant the Japanese version.

In that moment in the Buddha Hall, I felt connected by chanting in Japanese like we did at my home sangha in Brazil. I didn’t have a connection with SFZC before this, and from all the Zen centers I visited that year, I had the shortest stay at SFZC, only a week. But because of that feeling of connection, I came back to SFZC as a resident the next year.

Just a few years later in 2018, Engetsu became the Ino (head of the meditation hall) at City Center. One of Engetsu’s favorite parts of the job was welcoming people to the zendo, especially newcomers. “I really could see myself in them – that was me almost yesterday,” she said. “By the end, I felt I knew everyone in the community. It was an incredible feeling of intimacy.”

Engetsu traveled to Brazil at the beginning of 2020 thinking she would return to City Center in April. Due to the Covid-19 pandemic, she is still in Brazil, though she hopes to return as a resident once it is safe to do so. From Brazil she attends the Online Zendo, Dharma talks, and other events online. She also volunteers with SFZC as a graphic designer. Her latest work was putting together the 108 mudras image for the 2020 Membership Campaign!