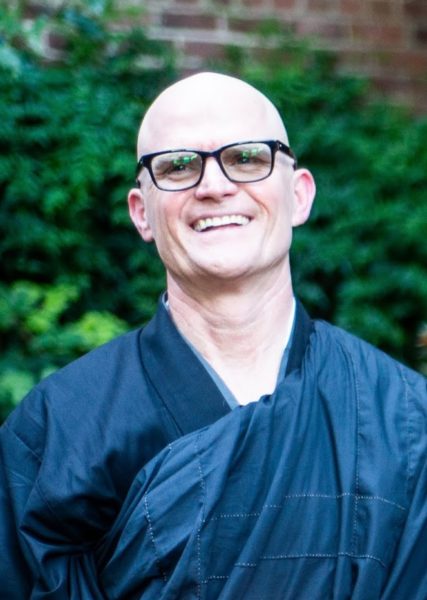 Myles Cowherd (Dharma name: Ancient Forest, Wonderous Awakening) is the Director of Donor Relations, a new position at SFZC. In this interview, Myles shares how he came to Zen and how his new position is an opportunity for him to share the teachings of generosity and abundance.

Sangha News: First, let’s talk a bit about you personally. When did you come to San Francisco Zen Center and how?

Myles Cowherd: I became a resident here at City Center in September 2013 to attend Paul Haller’s Practice Period. And before that, I’d done stints at all three of the temples as a guest student though a recommendation from Gil Fronsdal.Â

SN: How did you decide to do that?

From the time I was 20 until I was 47, I worked in the blueprint business that my grandmother started in San Jose in 1930. (Yes, my grandmother.) Eventually, I bought the business from my father and ultimately sold it to another company though I continued working there. I saw that, given the nature of the emerging technology, the business was probably not going to last, so I started looking around for something else that was interesting to me.

I was working with a life coach who was a Buddhist and when I told him I wanted to do something to help people, he suggested I sign up for the  SATI Buddhist Chaplaincy Training Program which was being led by Jennifer Block, Gil Fronsdal, and Paul Haller, who eventually became my teacher. Though I’d done a few retreats at Spirit Rock and sat a bit with the Dharma Punx group in San Jose, when I started the chaplaincy program I knew I had found my home.Â

As it happened, I was right about the business. I was lucky enough to be laid off five months after the chaplaincy program ended and decided to take a year off to explore my next path and be with my daughter as she finished her senior year of high school. Gil Fronsdal suggested that I check out the guest student program at San Francisco Zen Center and eventually said to me, “Well, if you could move into San Francisco Zen Center, why wouldn’t you just do that.”

SN: Ok, but why Buddhism? There are lots of chaplaincy programs. What attracted you to Buddhism?

It was a visceral feeling that happened on one of my darkest days. It was the overwhelming feeling of abundance I felt when I gave something away. It was the perfection of generosity that is so fundamental to Buddhist practice.

The story goes something like this. I was in the midst of a divorce from my first wife and mother of my children and we were arguing through our lawyers about the distribution of our property. Regardless of the assets I possessed or the love that surrounded me, my whole world felt scarce. And for some reason, even unknown to me now, I just let go. I let go of everything I was trying so hard to hold onto and for the first time had a feeling of incredible abundance. That feeling has never left me and when I connected that feeling to Buddhism, I wanted to weave this practice into my everyday life. And now I want to share it.

SN: But you didn’t go on to become a chaplain. Why was that?

Well, Iâ€™m not a chaplain in the sense of ministering in a hospital, prison, or other secular institution. But I see how the training that I received in the SATI program and the training that I am receiving from my teacher allows me to minister to everyone I meet â€“ by offering them freedom from scarcity by being generous, and achieving spiritual harmony by practicing self-acceptance. In that way, I’m always sharing the teachings. 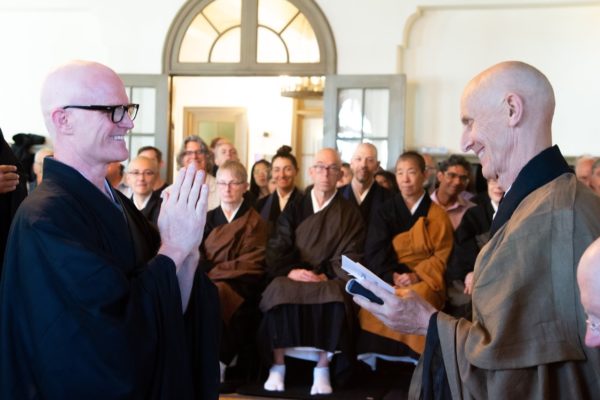 Paul gave me the name Ancient Forest because he said a monk is a tree and a forest is the Sangha. As I take my place and grow roots in our Sangha, I aspire to use the ancient wisdom handed down to me in the service of our community and all of those who came before me to create this place and all of those who, no matter how far away, continue to support and nourish it. I aspire to be a welcoming force in our community, helping people find their homes and grow their roots in our forest.

SN: Now letâ€™s talk a bit about your new role. You accepted the position of Director of Donor Relations in March. This is a new position at Zen Center, right?

That’s right and so I’m the first person to hold and, to some extent, create that position.

SN: What is entailed in donor relations?

Well, I’m sort of like a concierge to our community of donors. If you go to a hotel, the concierge is the person you go to when you want information about the area. Maybe you want to go surfing and he or she will ask “Are you looking for big waves or little waves?” and direct you to the right beach. So I’m the person who has information about giving opportunities and philanthropy at San Francisco Zen Center. I’m also an advocate for our donors, people who have given their time, talent or treasure, as the saying goes. My job is to help them understand how the programs they support heal the world. I was lucky enough to experience this healing first hand.

SN: And how does that work, exactly?

I have a list of our most active and committed donors and I’m connecting with each of them personally. First I send out an introduction letter describing my new role and then follow up with a phone call to thank them for their support.

I assist our donors in defining their level of interest in having an ongoing personal relationship around their support of SF Zen Center. We work together to ascertain what they are most interested in and inspired to support.

For example, there are some people who feel primarily connected to Tassajara and obviously right now there is a lot to talk about. Some donors have a connection to Green Gulch Farm or City Center or are primarily interested in the teachings of Suzuki Roshi. I provide and help them to find information about what’s currently happening in those areas.

SN: That makes for a lot of conversations. Does this come easily to you?

Not at all. At first, I was terrified to pick up the phone. But I’ve found that people appreciate the effort we are making to reach out and that whether or not they want on-going conversations, they are grateful for my call. Iâ€™m also preparing a quarterly report for the entire group to let people know how their support is making a difference whether they prefer an in-person call or not.

SN: How did this position come to be and what is the rationale behind it?

I think it was driven somewhat from the donors themselves who wanted to know more about what is happening at San Francisco Zen Center. One of them said to me, “I’m always knowledgeable about your campaigns, but not about the organization itself.” In other words, they felt they heard from the institution when it needed support, but not about how their support was being used.

It also came from our leadership who want the people who support us to know just how much their support means to our community, and for them to have a voice. That’s something that really inspires me — the idea of caring for and connecting with those who so generously support us. And so as well as being the ‘concierge’ I’m also something of an advocate, someone who helps our supporters feel supported.

SN: What are the things the people you’ve spoken with are most interested in?

They want to know how we are helping to heal the world. And this is what I try to understand from the conversation.

For example, not many people know that in addition to feeding our residents, and selling our produce to restaurants and at farmers markets, Green Gulch Farm with assistance of a grant is distributing food through three non-profit organizations: People’s Inner City Fellowship Church, Conscious Kitchen and Martin Luther King, Jr. Academy. This is a perfect example of how I can show not only the program that is being supported but how we weave our practice within it — in this case, the practice of generosity or dana-paramita. It really touches people’s hearts.

If you would like to connect with Myles to share your experience as a donor or to learn more about philanthropy at San Francisco Zen Center, email him at myles.cowherd@sfzc.org or schedule a meeting in his calendar by clicking here.