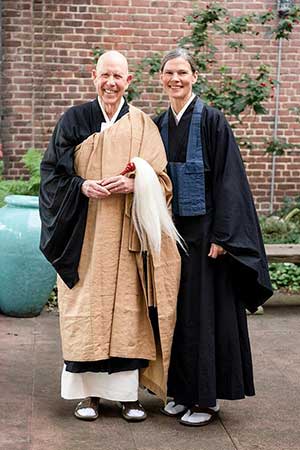 Sangha News: Hi Nancy. Thank you for agreeing to this interview and congratulations on your new position.

Nancy: You’re welcome. And thank you.

SN: Before we go into more personal territory, let me ask you a general question. The tanto position is defined as the head of practice for a temple. But what does being tanto mean to you?

N: Before I accepted the position I asked to see a job description because although I had known many tantos I didn’t know exactly what the job would entail. The first job of the tanto is “keeper of the forms”—the forms of the zendo and of ceremonial practice. I loved reading that because I love our forms and was drawn to practice largely because of them.

The second task is to “bring everyone along together.” This involves inviting speakers and scheduling classes and doing my best to include everyone in the practice—teachers and residents and non-residential practitioners. And that is what I really want to do, to find ways to support people as individuals and help them show up for practice as themselves, both here and in the world.

SN: OK. Thank you. Now I’d like to ask some questions about your background and what led you to San Francisco Zen Center. I understand that you are a native San Franciscan?

N: Yes, third generation! And not only a native of San Francisco, but specifically a native of Catholic San Francisco. All of my parents—friends were people they grew up with, going to Catholic schools. You were known not by your neighborhood, but by your parish. I was a St. Stephen’s girl. And I loved it—the ritual and the beauty of the ceremonies, the rites of passage and the sense of community. .

SN: So you went to Catholic schools?

N: Yes, through high school. And then for some reason, I decided to go to Berkeley for college where, for the first time in my life, I felt like a complete stranger. I went on to get my BA in social sciences with a minor in communications and when I finished school, I decided to move to Spain where I’d spent some time during my junior year.

SN: Why did you decide to move?

N: I guess I was running away from corporate jobs, which I thought were my only option.

SN: And how did that work out for you? What did you do in Spain?

N: (laughing) I had a lot of fun. I worked as an English teacher and a secretary to different businesses that were creating the 1992 World’s Fair in Seville where I lived.

SN: So you didn’t entirely avoid the corporate world.

N: No, but at least these were small companies.

SN: You got married when you were in Spain, didn’t you?

N: Yes. I married Luis who, after we’d been married for 10 months, died very quickly of lung cancer. I’d been in Spain for seven years and after his death, when I felt like the rug had been pulled from under me, I decided to come home. Actually it was with Luis’ cousins who had spent time in India that I first started meditating.

SN: And what happened when you returned to San Francisco?

N: The only thing that was clear to me was that I wanted to work outside and be around trees, so I started taking classes in ornamental horticulture at City College. It was a nudge from Jerry Brown that changed my direction.

N: Yeah, I am close friends with his nieces, so I would see him from time to time and worked on his campaigns growing up. When I came back to SF from Spain, I was drawn to Jerry and his work at We the People. One day Jerry asked me what I was doing, so I told him about the ornamental horticulture classes I was taking and he looked at me very intensely (he is always pretty intense) and said “Food is where it’s at!”

SN: Not one to beat around the bush, huh?

N: No, and that simple statement turned my world upside down. I started to explore possible farm apprenticeships in the area. One of the places I got in touch with was Green Gulch Farm. When I called there I was told that in order to be accepted as an apprentice, I would need to follow the meditation and class schedule. If not, it just wouldn’t work. They suggested I come out for a Sunday program and check it out. So I did. I came for zazen instruction and then zazen.

From that first period of sitting in the zendo I felt as though I’d come home. I just loved it—the aesthetics, the simplicity, the smell of incense and the beauty of the forms. That was in 1995 and I lived there for nine years, except for the three practice periods I did at Tassajara.
It was at Green Gulch that I met and married my second husband, Daniel, and gave birth to our daughter Olivia.

SN: Nine years is a long time. Why did you leave?

N: At some point, Green Gulch really wasn’t working for us as a family and it was clear that it was time for us to leave. It was a really painful decision for me, but I thought that it was the best thing for our family, which in the end it was. We moved to the East Bay where I trained and worked as a birth doula.

Daniel and I ended up divorcing and I moved back to San Francisco with Olivia. It was then that I returned to SFZC and worked in the development department for eight years. After Olivia graduated from high school I moved into City Center with my partner Myles Cowherd who had taken my place as Development Director and I returned to doula work. This was in 2018. Obviously, the current pandemic has really restricted that sort of practice.

SN: And then you were invited to become tanto.

SN: One of the interesting things about you being offered the position is that you are the first City Center tanto who is not a priest. How about that? Have you not considered seeking priest ordination? 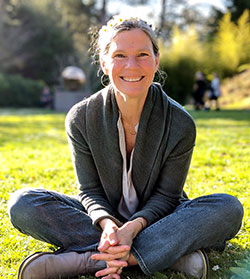 N: Well, of course I considered it, quite seriously at one point. But when I had my daughter I decided that I didn’t want to divide my attention, so I made the choice to commit to the lay path, a huge part of which for me is being a mom. I received jukai in 1998 from Linda Ruth Cutts and was shuso in 2014 at City Center. Before the shelter in place protocols came into effect, I was working with Central Abbot Ed Sattizhan on lay entrustment, but that is necessarily on hold for the time being.

SN: In your entering ceremony, the Abbot showed you to your seat in the Zendo. It must have been poignant to be invited to a seat you may not sit in for several months, as the zendo is temporarily closed due to Covid-19. How has the pandemic shaped you’re thinking about your position as tanto?

N: Yes, one of the hardest things is not being together in the zendo; sitting zazen, entering each day together that way as a practice community. We are no longer sharing oryoki meals, no services of bowing and chanting, setting our intentions or renewing our vows. All of these ceremonies and forms create a deep harmony in the community which is beyond our knowing.

So here we are now, each of us practicing in our homes in the online zendo. Zoom is a clumsy alternative to enacting these forms together but it’s what we have and we are making the best of it. It’s an incredible amount of work to create all these little pieces and string them together and we are trying to practice with a standard of “good enough.” It’s a stretch.

SN: And what about the rising awareness around the pandemic of racism and other social justice issues and the work SFZC needs to do in that area? How will you use your influential position within the institution and what do you feel is critical for SFZC right now?

N: I am seeing the awakening to the pandemic of racism that is finally taking hold in our society resonating with practitioners here in a profound way. While diversity and equity work within our temples had been moving along at a slow pace, even with some very committed people in our Sangha taking it on with very good intentions, the shift of so many vowing to take up antiracism, educate ourselves and shine this growing awareness back on our organization has been inspiring.

In my role as tanto, I am committed to being open to feedback and reflecting back to others with kindness when I feel moved to speak up. I also commit to real, concrete action on an institutional level. SFZC’s DEIA (diversity, equity, inclusion, and accessibility) committee has been working to develop a document that includes specific action items and I intend to take these up with all that I have.

I vow to continue to turn this question on every level possible, “What does it mean for me to ‘bring everyone along together?”

SN: Thank you, Nancy, for sharing so much with us. Best wishes in your new position.