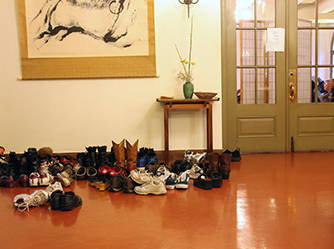 On the last Monday of June in 2000, Meditation in Recovery met for the first time in the City Center Buddha Hall. At the time it was an experiment to see if enough people would be interested in exploring the similarities between Buddhist teaching and practice and recovery from substance and behavioral addiction to make it a viable program. Twenty years later it remains a lively and important offering, which has introduced thousands of people to Buddhism and to San Francisco Zen Center. Some of these participants have gone on to receive the precepts as laypersons or as priests. Some have become residents and staff. Some have gone on to lead similar groups.

Twenty years ago, Meditation in Recovery was a unique event, possibly the only group of its kind, but currently Buddhist recovery groups are widespread throughout the country and internationally.

Many who attend MIR do so because they are uncomfortable with the theistic language of most 12 Step programs, so one of the on-going tasks has been to translate the wisdom and practices of those founding programs into language more accessible to such people. As Buddhism, at its most basic, deals with the multiple addictions which create suffering, the reframing was not too difficult. (For an extended expression of this please see these essays on Buddhism and the 12 Step.)

Meditation in Recovery usually meets at City Center on Monday evenings at 7:30. There is also a meeting on Friday evenings at 7:30 at Hartford Street Zen Center. On the first Thursday of the month, there is a group for women and on the second Thursday a group for men. All of these groups currently meet on Zoom. The meetings are open to anyone who wishes to attend. You may be someone in recovery, a friend or family member, or simply someone who is interested in the topic and the group.

San Francisco Zen Center is honored and grateful to have been a leader in this movement, opening the dharma gate to more and more people, promoting healing and freedom from suffering.

We bow to those who created and have led the group over the past twenty years and extend our very best wishes for the future of this important work.