The Rooftops at Zen Center Are Buzzing

By Marcia Lieberman, the beekeeper at San Francisco Zen Center

Spring arrives and with it the honey bees on the rooftop of SFZC’s City Center/Beginner’s Mind Temple begin to scout and forage for the sweet nectar that is nestled in nearby gardens. There are lots of choices as the bees can fly up to six miles for a source and every gardener has their own preferences. Variety is a key bounty in urban bee keeping. 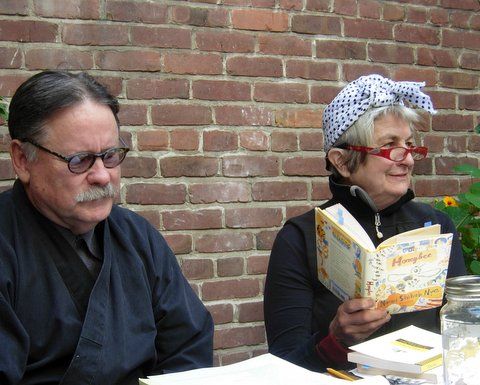 Since 2011, when Zen Center decided to provide a safe haven for bees, we have kept hives of honey bees on the rooftop. Alan Hawkins, my beloved bee teacher, taught me how to handle bees in a gentle and kind way. The early beekeeping was rustic and with minimal equipment. Now we have grown into a more elaborate work style, most of which makes it easier for the bees and for the beekeeper.

Honey bees are good teachers. They each have a particular “task” in their community. They live in a lightless dwelling and communicate with their bodies and the hum of their wings. Gender is a shifting phenomenon in the hive and the category of worker, drone, or queen depends on what the shiny larva is fed. Each hive has one and only one queen; she lives among approximately 80,000 bees who are dedicated to the well-being of the community.

Becoming a beekeeper was a big surprise for me. I didn’t grow up thinking this was how I would spend hours of my time. But with the first glimpse into a frame of honey covered with bees that were focused 100% on their task and happy sharing the bounty, I was heart-struck. And humbled.

Here’s some reasons why:

We are lucky. The bees are so efficient at making honey, they often have an excess amount. This excess is harvested by me and then put in glass jars for the bookstore to sell. It’s called BEE ZEN. The proceeds of these sales go to the garden budget—so we can grow and provide more delicious flowers for our bees.

In recent years I’ve had wonderful support and help from Brett White whom I met at the SF Beekeepers Association. His energy and efforts have helped keep our hives healthy and happy. So I’m pleased to be able to publicly thank him.

You may know in Dhammapada, Buddha said,
You should be
like a bee
collecting honey
from flower to flower
flying
from flower to flower,
without destroying
the flower,
without disturbing
the beauty of
the flower.
That is Buddhist way of helping people.
—Shunryu Suzuki Roshi — August 1971, Tassajara
Read more from Arts & Culture, Features
City Center