On October 1, Konjin Gaelyn Godwin Roshi was appointed the new Director of the Soto Zen Buddhism International Center. She is both the first woman and the first Westerner to hold the position. 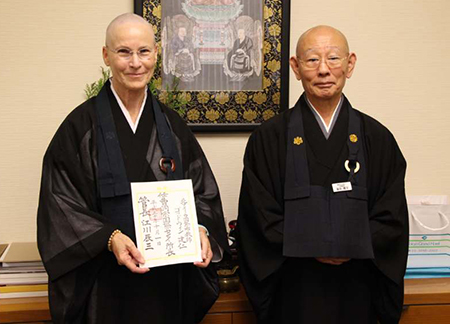 Tenku Ruff, President of the Soto Zen Buddhist Association, wrote an article in the journal Lion’s Roar about the significance of Konjin Roshi’s appointment to this prestigious role. Tenku Ruff wrote:

“In the US, we have had female Soto Zen leaders for some time, yet gender discrimination persists. The next generation of Soto Zen leaders at our larger temples and monasteries is almost exclusively male. In the Soto Zen Buddhist Association, only twenty percent of authorized teachers age 55 and under are female. Konjin Roshi’s position as director requires her to travel to different temples and monasteries to give talks, meaning both laypeople and monastics will receive teachings from her. Konjin Roshi will also make official visits to Japan, allowing Japanese people to become more accustomed to a woman leader … I hope that Konjin Roshi’s position will influence Zen practitioners and leaders in both North America and Japan, lay and monastic.”