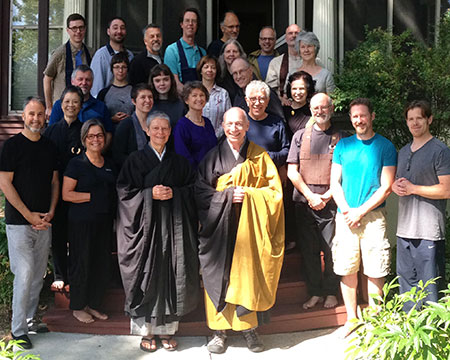 Reirin Gumbel and Steve Weintraub with the Milwaukee sangha

History
In the mid-1970s a few friends in the Milwaukee area began meeting to study Buddhism and to practice zazen. For several years, Rev. Dainin Katagiri of the Minneapolis Zen Meditation Center visited and guided the group through lectures and weekend retreats. Slowly the group grew more organized and with the help of many people, the Milwaukee Zen Center was incorporated in 1983 as a non-profit religious organization.

In September 1985, Rev. Tozen Akiyama came here to be the Resident Priest. Then, in September 1986, the Zen Center purchased its present home, where all center activities take place. Rev. Akiyama led the activities at the Center for sixteen years, until June of 2001, when he departed to act as Head Teacher for the Alaska Zen Community. He has since retired and lives quietly in California. He designated his student, Rev. Tonen Oâ€™Connor, as Resident Priest and her appointment was confirmed by the Centerâ€™s membership. She became semi-retired in September 2011.

Today
In September 2015, at the 30th anniversary, Reirin Alheidis Gumbel was installed as the new Resident Priest and Guiding Teacher. Reirin was ordained in 2007 by Furyu Doshin Nancy Schroeder at Green Gulch Farm Zen Center, after living in residence at SFZC temples for many years. She is currently preparing for Dharma Transmission with her teacher.

MZC has a non-residential lay sangha and currently 25 members, who are keeping the center financially sound. The Dharma is offered on the basis of dana. Morning zazen and service is offered daily, zazen instruction once a week, and a public program with Dharma Talk on Sundays. Several study and reading groups are well-attended. There are monthly longer sittings, and sesshins are offered twice a year, in conjunction with Hokyoji Zen Community in Minnesota. A first practice period was offered in the Fall of 2017, which was well-received.

Active in prison ministry over the past seventeen years, the MZC is the central organizing force behind a group of twelve teachers from a variety of Buddhist traditions who serve several Wisconsin correctional institutions. The Dharma Book Fund helps make printed materials available to prisons and other institutions. 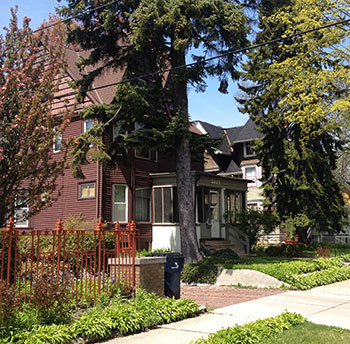 MZC clergy also have a longstanding involvement with the local Buddhist Peace Fellowship and Interfaith Conference of Greater Milwaukee. Both organizations are active in social issues. Requests for information about Buddhism by local universities and other organizations are met with talks, discussions, and workshops. MZC also has a good relationship with other Buddhist groups of the area, and there are frequent inter-sangha events.

We are currently planning renovations to the 100-year-old house and property, which will give us a larger zendo space and make us more visible. There is room for overnight guests, and everyone is invited to come and visit!