This winter, Green Gulch farmers have been cultivating a relationship with the Verde Partnership Garden in North Richmond. 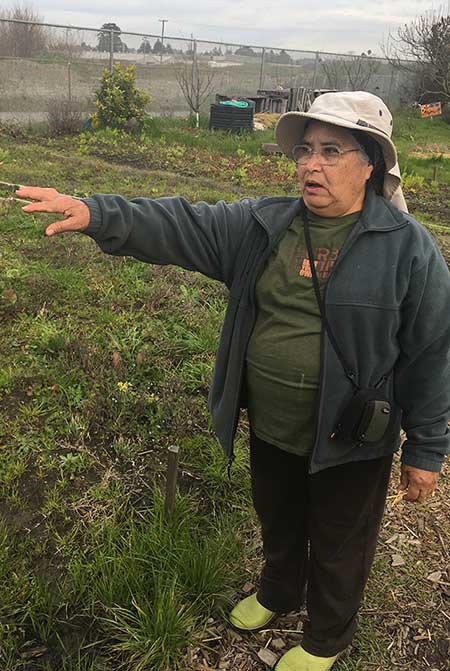 I learned about the garden in January during a month off from residential practice at Green Gulch Farm. I took this time to allow myself an opportunity to work directly with people dedicated to the environmental justice movement in the Bay Area.

The winter garden’s caretakers, Luis Chavez and Ms. Meza, received me amid sounds of a freight train a few blocks away and the clamor of kids in the schoolyard. When they found out that I was from Green Gulch they laughed in recognition. It turned out that I had landed in a garden that had been managed and tended for many years by a woman who had lived at Green Gulch as a child, Cassie Scott. Through Cassie’s relationships with longtime Green Gulch residents Wendy Johnson and Peter Rudnick, many of the plants that established the garden in the mid-90s were starts brought over from Green Gulch Farm. No wonder the place felt so familiar.

As the weeks passed, and the rain filled the garden—giant water catchment tanks, the Verde gardeners told me stories of how the garden has sustained itself over the years. Verde has a rich history that I am still weaving together as I get to know the place and the people. Luis and Ms. Meza are the current stewards of the Verde Garden which is one of a collection of urban youth farming projects in North Richmond that make up the organization Urban Tilth. Ms. Meza has been part of the garden since its early days and her children attended Verde Elementary School. I learned that Verde was, in fact, started in the 1990s by a group of Laotian immigrants. They brought their gardening tools to the school and began to garden in what was at that time a vacant piece of land. They grew their traditional foods to remind them of home.

The garden in its early stages drew the attention of Cassie Scott, a psychologist at Verde Elementary School, and she started a non-profit to care for the land and the kids at the school. Verde became, and continues to be, a true oasis in North Richmond, a city heavily impacted by the Chevron Oil Refinery that has been operating there for over a century. With the dedication of Cassie Scott, Ms. Meza, Luis, local Laotian gardeners and many others over the last several decades, the Verde Partnership Garden has been playing an important role in supporting and nourishing the community. Verde is the only elementary school serving the North Richmond community. This one-acre food and flower garden produces veggies, fruits, and flowers that are offered to the children’s families.

After a month of weeding overwintered vegetable beds and demonstrating my love of compost by building three massive piles, I returned to Green Gulch with a commitment to nurture this relationship with Verde. For the past several months, a group of Green Gulch farmers have shown up each week to tend the garden in preparation for spring planting. It has been inspiring to see the garden emerge out of the winter weeds. To see how ladybugs and worms, butterflies and centipedes, and a variety of songbirds find their way to this one-acre plot of green in the midst of a rough urban landscape. It has been energizing and humbling to be in partnership with such an inspiring and relevant project, in a neighborhood that has very little access to fresh food. It has been moving to me to leave the sea air and rolling green hills that surround Green Gulch Farm and arrive each week at the flourishing school garden within sight and smell of the nearby Chevron refinery.

Green Gulch Farm has made a full circle back to the Verde Partnership Garden. With spring coming, the fruit trees are blossoming, shoots from the bulbs are emerging from the soggy ground, and we are bringing a collection of our first veggie starts of the season to take root at Verde. Our work days there have been joyous, with friends and former apprentices from Green Gulch Farm showing up and dedicating their energy toward preparing the garden for another season of growth and beauty.

We all need medicine to treat the dis-ease of our times. Ms. Meza continues to teach the youth, live in the North Richmond community, grow her flowers, and offer food to people directly from the garden. Luis welcomes us to work alongside him each week, supporting our contribution to Verde, and feeding the web of connection. We will reciprocate by welcoming Verde’s teen gardeners to Green Gulch Farm. We hope this connection will flourish as a mutually beneficial sangha relationship for years to come.

If you would like to volunteer at Verde Garden or connect with Urban Tilth’s other gardening projects, itâ’s a wonderful opportunity to express our interdependence and contribute directly to these projects that benefit numerous beings.

About the writer: Sara Poggi Davis is the Assistant Farm Manager at Green Gulch Farm. She’s been farming and practicing being herself at Green Gulch for five years. She is blessed to have the opportunity to direct her energy toward harmonizing with others through wholesome work.