We just celebrated the Buddhaâ’s birth in a ceremony of bathing the baby Buddha in sweet tea. The last shuso ceremony of the winter and spring practice periods ended this week and we turn to the Guest Season at Tassajara, the Growing Season at Green Gulch Farm and the spring and summer activities of the City Center including the 6-week practice period that I will be leading, the Environmental March on April 29, and the upcoming Pride Parade in June. 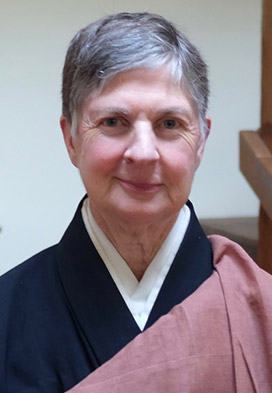 I want to let you know that I will be traveling to Washington D.C. next week to participate in the national conference of The Regeneration Project/Interfaith Power & LightÂ on whose board I sit and of which San Francisco Zen Center is a member. This is an organization whose purpose is to mobilize in many ways, a religious response to global warming. TRP/IPL is committed to drawing on the strength and understanding of the inter-religious resources of ethical behavior, spiritual values, and people of vision and moral commitment, to meet the unprecedented ecological reality of our time. We will come together to support our efforts as well as to join in peaceful actions of speaking with our elected representative on Capitol Hill to press for tangible results and to impact public policy. The meeting was scheduled months ago and synchronistically coincides with the Climate March in Washington D.C. that looks like it will be resounding throughout the country and perhaps the world. SF Zen Center will be enthusiastically participating in this march-practice, and together as a sangha of friends, residents, members, and family, will join with the People’s Climate Mobilization sponsored by 350.org, to express with sincerity and commitment our bodhisattva vow and the truth of our interdependence with all beings. You are invited to come and join with others for this sister march at Lake Merritt in Oakland starting at 12 pm on April 29. This march will take its place among the many expressions of love for the earth and for the preciousness of life that have been enacted through the years at SFZC. And our practice can support us in being a calm and steady presence on this day of action.

I will be marching with the mind and heart of “Nonna-paura,” a word I coined when asked in a workshop by Heidi Quante of the Bureau of Linguistical Reality, to try to express a feeling I had for which there was no word. Nonna-paura translates from Italian as”Grandmother fear.” Here is my definition for this wordless feeling: “The simultaneous sensation of a strong natural urge for your children to have children, mixed with an equally strong urge to protect these yet unborn grandchildren from a future filled with suffering as climate change accelerates and drastically alters the Earth.” 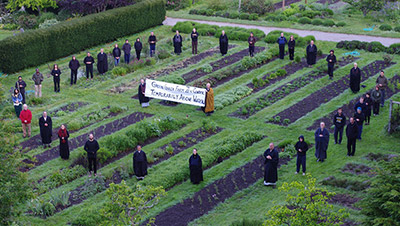 SFZC Sangha Gathers Together to â”March-Practice” for Climate!

As David Loy* recently said in a keynote address at the Soto Zen Buddhist Association conference, quoting environmentalist James Gustave Speth, “All we have to do to destroy the planet’s climate and biota and leave a ruined world to our children and grandchildren, is to keep doing exactly what we’re doing today, with no growth in human population or the world economy. Just continue to generate greenhouse gases at current rates, just continue to impoverish ecosystems and release toxic chemicals at current rates, and the world in the latter part of this century won’t be fit to live in. But human activities are not holding at current levels. They’re accelerating dramatically.”

And so with Nonna-paura and with the practice of our Zen Grandmotherly Mind which makes each and every thing worthy of our full attention and practice, I will work and march with others and affirm our life and vows with love.

*David Loy is a Professor, writer, lecturer and long time Zen practitioner in the Sanbo Kyodan tradition of Japanese Zen, a lay oriented koan school. David is a prominent social justice activist, with a particular focus on environmental justice.