In Washington, D.C., San Francisco, and at Green Gulch Farm, residents and members of San Francisco Zen Center participated in the Women’s March. 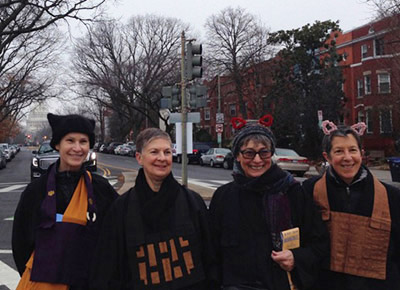 On January 20, I flew to Washington, D.C., and joined hundreds of thousands of others who were traveling to the U.S. capital to express themselves by marching and speaking and embodying in myriad ways their deepest feelings. On the small plane from Charlotte, N.C., the man next to me said, “There seems to be a party atmosphere on this plane.” I asked him if he knew why and he said, “No.” I told him, “They’re all here for the Women’s March tomorrow!” As soon became clear, we were among millions throughout the country and the world who walked in solidarity on January 21.

Our group was skillfully and carefully organized and supported by the Abbot of Houston Zen Center Setsuan Gaelyn Godwin and Myōan Grace Schireson of Central Valley Zen Foundation, with the help of many other people who added their first-hand experience and knowledge of how to take care of yourself in a large demonstration. Before the march, not knowing what might happen, we were cautioned to wear layers, bring extra socks, a bandana, and swim goggles in the event of tear gas, to write our emergency contact information in permanent marker on our forearms, and to bring snacks, water, rain gear, and money to get out of jail. Many of these precautions were thankfully not needed. In fact the peaceful atmosphere as well as the absence of security checks and police presence was notable.

Many in our group met the night before the march at All Beings Zen, a SFZC Branching Streams affiliate sangha in Washington, D.C., whose guiding teacher, Inryū Bobbi Ponce–Barger, had recently returned from the Tassajara Fall Practice Period. After a time to greet each other we performed a ceremony Inryū had created, reciting the names of our women ancestors, “for protecting lives and Inspiring Right Intention for all participating in the Women’s Marches all over Our Planet.” Our core group, Gaelyn Godwin, SFZC President Linda Galijan, Joan Hoeberichts, from the White Plum lineage—all donning their pussycat hats and tiaras—and I, were the anchor for our meet-up spot at the National Museum of the American Indian. When we arrived, there was a group of Native Americans gathered who were drumming, dancing, and singing and we joined them in a rhythmic circle dance. We set up our banner, “Zen Women for Democracy,” beautifully designed by Gaelyn, and ended up staying in the same spot, being unable to move due to the ever-increasing crowds, until the afternoon. More and more people arrived in a swirl of pink hats, heading to the nearby rally. However, the core group wanted to stay in one place since all the communications had said that was where we would be meeting up. Through the morning we received messages from people who said they were on their way but could not get through the crowds to find us. The huge numbers of people seemed to be all of one spirit—filled with a robust and buoyant, radiant and joyful energy, and were ready to get to work. The kindness, caring feeling, and the recognition of kindred spirit allowed a vast community to be created and recognized, a kind of sangha of harmonious and heartwarming liveliness. Linda Galijan commented, “We were crowded so tightly together and everyone without exception was so understanding and kind, patient and joyful. We were all our best selves, everyone looking out for one another, beautifully manifesting the sangha jewel.”

More people located us—women and men from Dharma Rain in Portland, Mid City Zen from New Orleans, a Vajrayana Group, Houston Zen Center, Washington, D.C., Brooklyn, and, of course, Grace Shireson with her red sign of an ox-herding picture saying “Zen Women Stop the Bull!” Eventually we heard that we could not march along the designated route because it was already completely filled with people, so everyone just started flowing down Pennsylvania Avenue to the National Mall, past the White House, chanting slogans of solidarity, inclusivity, tolerance, and love. 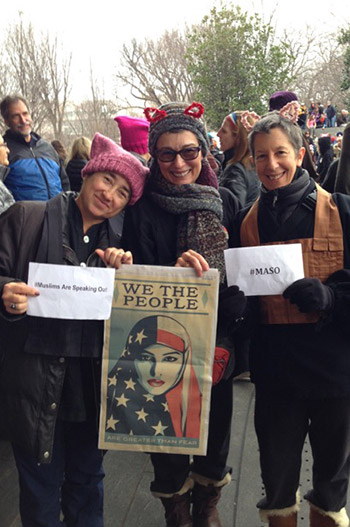 All during the day there was a wave of sound that would flare up, sometimes in response to a speaker, but usually just spontaneously. This sound that erupted over and over, this full-throated expression, reminded me of the verse in the “Kuan Yin, She Who Hears the Cries of the World” chapter of the Lotus Sutra—in which it says, “The precepts of compassion roar like thunder.” I felt this upwelling of roaring sound to be a deep expression of anguish for our fellow beings, a sound of love for the earth and each person, animal and plant, and a prolonged cry of vow and commitment to respond completely. As one sign said, “Show Up, Dive In, Stay at It.”

So many of the signs were more than clever. They were humorous, creative, ironic and powerful. The marches were more about love and inclusivity than a reaction or protest, with chants of, “Love not hate makes America great!” and “Tell me what democracy looks like! (This is what democracy looks like!)” And so we marched until we were chilled and tired. We finally ended with hot soup and hot tea in a restaurant with a sign in the window: “Women Owned business, open for Jan. 21 march.”

Knowing that many of you participated in expressing yourself by marching, now is the beginning of making our practice, our precepts even more explicit. What will be our focus of attention, where will we pour our positive energy, how will we continue to express ourselves and create the counter-measures that are called for? This is our life of Bodhisattva vow, and working with wisdom, skillful means, and compassion. It is not separate from our zazen practice. I trust the words of Dōgen Zenji: “Kind speech means that when you see sentient beings you arouse the heart of compassion and offer words of loving care. It is contrary to cruel or violent speech … it has the power to turn the destiny of the nation.” [Bodhisattva’s Four Methods of Guidance #45 Treasury of the True Dharma Eye, trans. Kazuaki Tanahashi.] I welcome your thoughts as we continue our practice together. 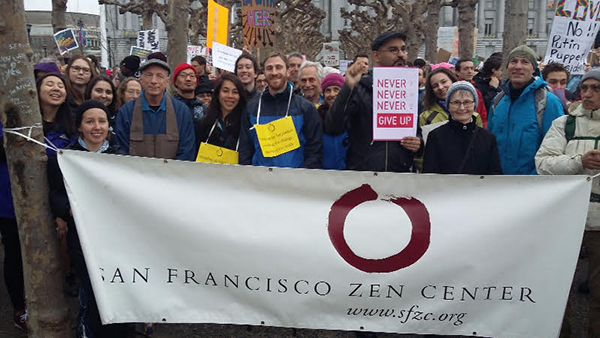 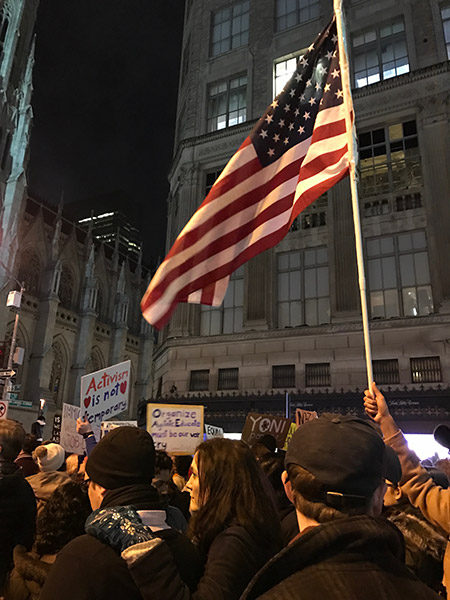 We had a walk to the beach here at GGF in solidarity. So moving to be with every one in silence. And when we got to the beach the ocean was roaring and churning, bigger than I have ever seen it. People stood on the beach facing the vast power. Something timeless, something mythic, something so simple and beautiful. Photos by Simon. 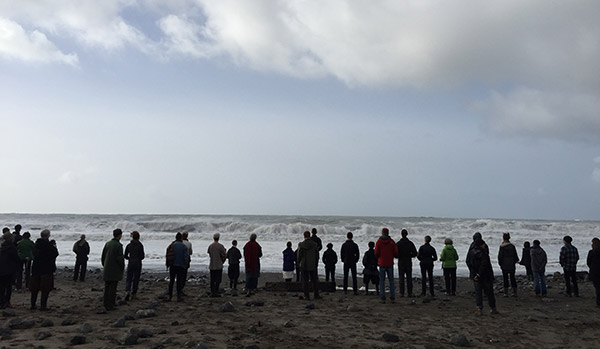 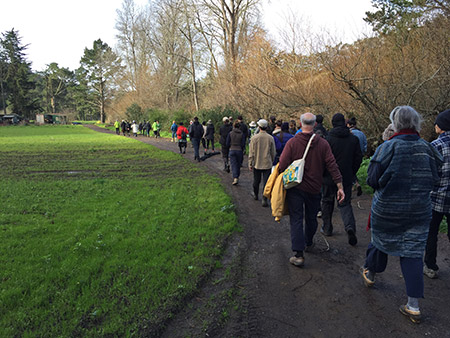 Green Gulch Farm group on their way to Muir Beach

And from the Oakland Women’s March 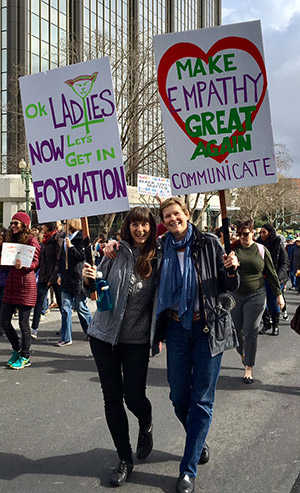 Emma Jackson and Siobhan Cassidy at the Oakland Women’s March