The Unsurpassable Wisdom of Vimalakirti, a musical comedy version of the revered sutra performed with life-sized puppets, will be presented at City Center on Friday, October 14, 7:30pm. One of the Vimalakirti Players, Ryoku Laura Burges, fills us in on the history of this amazing show. 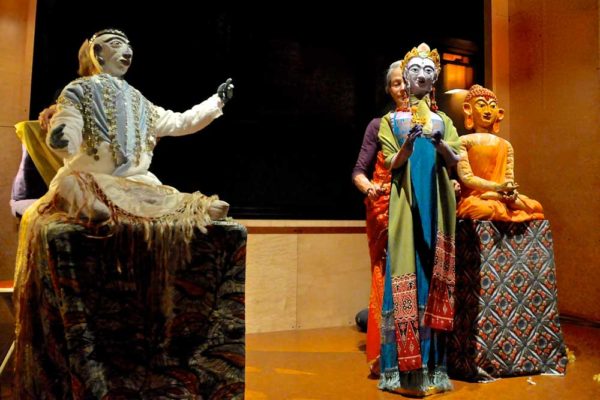 From left, Vimalakirti, the Goddess, and the Buddha. 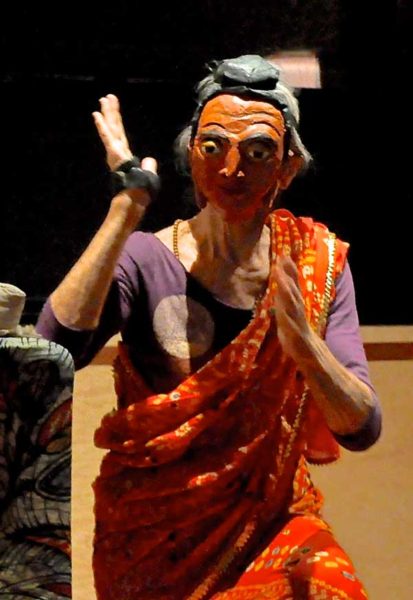 In this timeless story, a wealthy layman, Vimalakirti, becomes ill in order to demonstrate the truth of impermanence to a huge crowd of bodhisattvas. The Buddha, Shariputra, Manjusri and the Goddess are all in attendance. “Vimalakirti, although Indian, can be considered the first Zen master — apart from the Buddha himself — as he specializes in a type of discourse that is subtle, in a lucidity that balances on the razor’s edge of paradox, and yet is quite logically coherent. His message is particularly appealing to our secular age, because he was a man of the world, not a monk or saint,” according to Robert Thurman’s The Holy Teaching of Vimalakirti: A Mahayayana Scripture.

Around 1990, Alyse Rall, the author of the show, went to Green Gulch Farm to hear a lecture by Robert Thurman about his translation of the sutra. Alyse was working at a theater at that time and was involved in a performance piece with puppets, and it occurred to her that this particular story might be successfully translated to the stage for the entertainment of modern audiences.

When asked what struck her about the story, she says, “I was attracted to the dialogue between Shariputra and the Buddha. And I liked that it gave a bit of status to the Goddess. It was refreshing and unusual to have a woman’s point of view expressed in the context of the Buddhist tradition.” 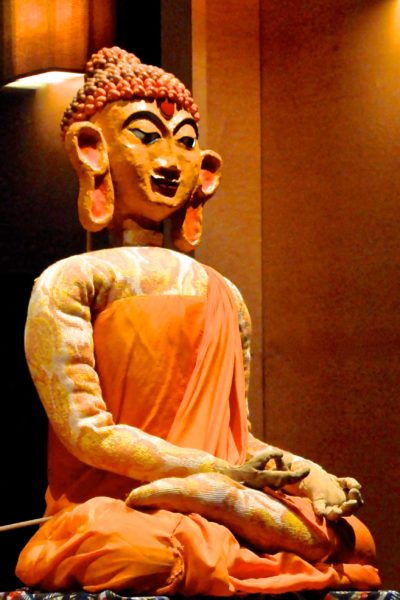 The puppet show was just a fleeting idea until . . .

Valentine’s Day rolled around. Alyse sometimes makes Valentines for her friends and she was inspired to bake a Boston Cream Pie using Ed Brown’s cookbook so she set off to deliver a pie to Ed Brown and Patricia Sullivan, who were living together in the city at the time. Ed wasn’t home, but Patricia was, and when she and Alyse got to talking about Alyse’s idea for a puppet show, Patricia said, “I’ll do it with you.”

The first performance of the show, using a rough script and hand puppets, took place at Yvonne Rand’s home, with Robert Thurman in the audience. Patricia’s conceptualization of the puppets continued to evolve and she enlisted Alyse to help her create life-size puppets. Alyse began to hear songs, the voices of the characters singing the words of the sutra, but she had to learn how to write the music down. “I remember scoring the music on the counter of Fred’s Coffee Shop in Sausalito, where I worked at the time, when business was slow,” says Alyse.

Alyse Rall with Shariputra, and Patricia Sullivan with the Goddess.

Patricia, Alyse, and a Zen student named Sarah were rehearsing in the Wheelwright Center, when Kokaku Blix happened by and informed them that they needed a bass voice in the show, and he quickly took on the vocals of the Buddha and the ailing Vimalakirti, while Patricia and Alyse brought the puppets to life. I’m not sure when I signed on but I give both the Goddess and Shariputra their voices — don’t ask me why but Shariputra seems to have a Brooklyn accent — and we’ve been performing together now and then for a number of years at different Buddhist centers around the Bay Area.

The music for the show has evolved over the years, with percussion instruments lending drama to the fantastic special effect of SHARIPUTRA AND THE GODDESS EXCHANGING GENDERS! Which, it turns out, is much easier to do with puppets than it is with real people. So do come and celebrate, and bring the kids. The sutra may be over their heads, but they seem to love this show anyway. As Vim himself puts it, “Those living beings who understand correctly this teaching of the Dharma will obtain the treasury of the jewels of the Dharma.”

Ryuko Laura Burges, a lay teacher in the Soto Zen Tradition, lectures and leads retreats at different practice centers in Northern California. She is one of the Vimalakirti Players.