Great Spirit Sangha completed its spring 2016 practice period on May 1, with the Shuso Ceremony of Kirk Phillips (Ten Zan Kai Do). 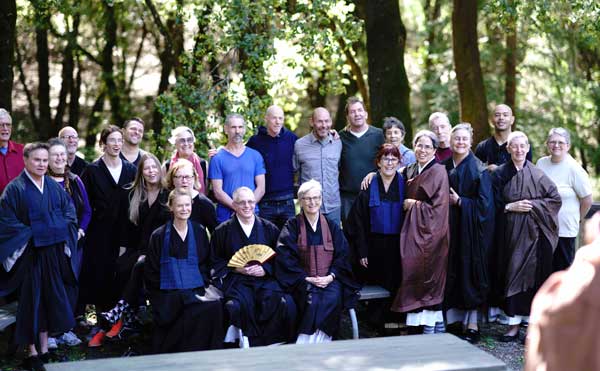 After the Shuso Ceremony, Kirk and Cynthia, center, pose with the joyful members of Great Spirit Sangha. Photo:

Great Spirit Sangha was named in honor of Darlene Cohen (Su Rei Ken Po, which translates as Great Spirit, Manifesting Dharma). Darlene was Cynthia Kear’s heart and root teacher and she transmitted the dharma to Cynthia before her death in 2011. Cynthia Kear (Ho Ryu Ryo Tan / Dharma Stream Completely Overflowing) and her sangha continue the study of practicing in the marketplace at Cynthia’s home temple in the Glen Park neighborhood in San Francisco.

The practice period, which had as its theme Awakening Our Hearts, was followed by a three-day sesshin at Jikoji Zen Center and culminated in a heartfelt Shuso Ceremony.

Kirk Phillips (Ten Zan Kai Do / Servant of the Dharma) was not only the Shuso for the practice period but also Great Spirit Sangha’s first Shuso. Kirk has a rich practice, beginning with Tibetan Buddhism. His first Zen teacher was Issan Dorsey and Kirk studied for many years with—and was priest-ordained by—Darlene Cohen (Su Rei Ken Po/ Great Spirit Manifesting Dharma). Kirk has been practicing with Cynthia since 2014.

In addition to leading a sitting group, Great Spirit Rising, at his home temple in the Haight, Kirk extends his practice into the marketplace where he is a nurse practitioner in a busy healthcare setting.

Great Spirit Sangha will engage in a Dogen Study Series over the course of this summer. Living Vow will be the theme for its fall 2016 practice period.