Long-time practitioner and SFZC board member Dennis McNally reckons that, beneath the surface hilarity, Bill Murray’s brilliant Groundhog Day is quietly teaching us the dharma. Unfortunately, he neglected to ask about it when he met the director, Harold Ramis. 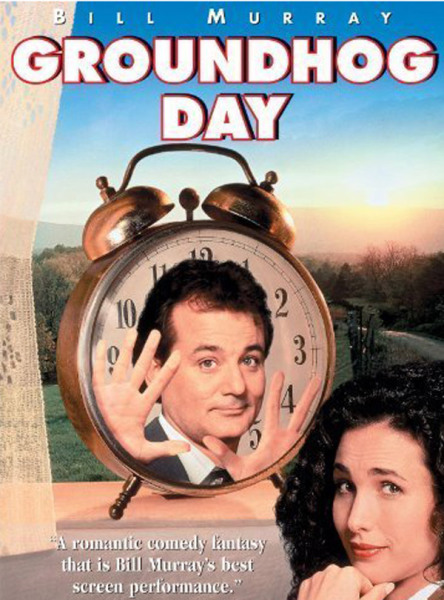 There really is a dharma point to this story; it just takes a minute to get there. Perhaps you recall the movie Groundhog Day, in which Bill Murray plays an arrogant, clueless TV weatherman from Pittsburgh who’s sent to cover the annual folk ritual in Punxsutawney, Pennsylvania, wherein a groundhog named Punxsutawney Phil is let out on February 2nd. If he “sees” his shadow, we can expect six more weeks of winter, and if there’s no shadow, there should be an early spring.

In the movie, Murray falls into a time loop and is condemned to relive the day over and over, always waking up to the same silly dialogue on his clock radio. Since there seem to him to be no consequences, he samples hedonism. After infinite repeats, that option palls, and he becomes depressed and tries suicide. When that proves futile, he eventually begins to explore growth, learning to sculpt and play the piano.

Under fairly improbable circumstances – it was the one and only time I’ve ever been involved in a dinner thrown by Gourmet magazine – I once met the director and co-writer of the screenplay, Harold Ramis. Somewhat affected by the liberal quantities of wine that Gourmet was offering us, I introduced myself and asked him if he’d mind a question. A charming man, he said go ahead.

“When you made the movie, did you realize that it was much more complex than the other comedies you made with Murray (most notably, of course, Ghostbusters)?”

“Well,” he replied, “I certainly knew it was a really good story.”

What I didn’t ask him, because I am not always the sharpest blade in the rack, was, “Did you realize that the movie is actually a really lovely allegory about Buddhism?”

Several years after that dinner, having in the interval begun my practice at Zen Center, I – once again! – found myself watching Groundhog Day, and during the interminable commercials found myself pondering one scene in particular. The scene was of Murray encountering an elderly homeless man in an alley. And since it’s February 2 in Pennsylvania, the fact that the man is forced to stand outside at night is striking. At first, of course, Murray casually brushes him off. After a while – tens of thousands of repetitions of the day, Ramis later said – Bill begins to recognize his common humanity with the old man; his compassion awakened, he does his best to help him.

Well, dull blade I might be, but with my practice staring me in the face, it dawned on me: here we have a boor locked into endless repetition. Finally he opens his heart to others and wakes up. Of course, being an American romantic comedy, the focus is on his pursuit of the lovely producer, Andie MacDowell, and that’s how the film ends. 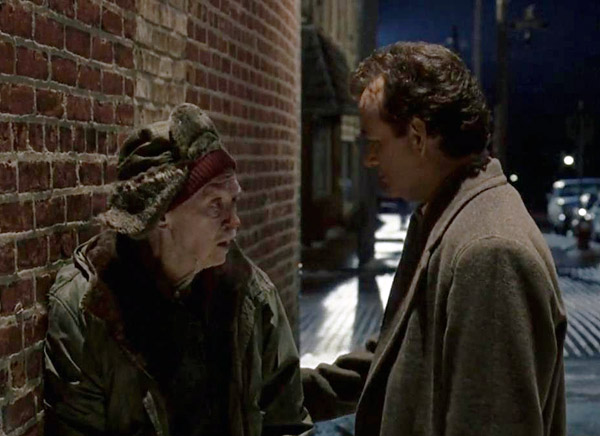 But what woke me up to the deeper meaning of the film was Murray’s frantic efforts to save the old man, efforts that awaken his latent capacity for compassion and allow him to reclaim his own humanity. Eventually, the old man dies, and he demands of the nurse the cause. “Some times,” she says, “people just die.” And if you see the movie often enough, the sardonic joke that is his reply to her – “Not today” – perfectly illustrates the response of someone who has traveled from utter selfishness to a caring recognition of mutual interdependence. He’s seen through his own samsara, and it’s a lovely dharma lesson.